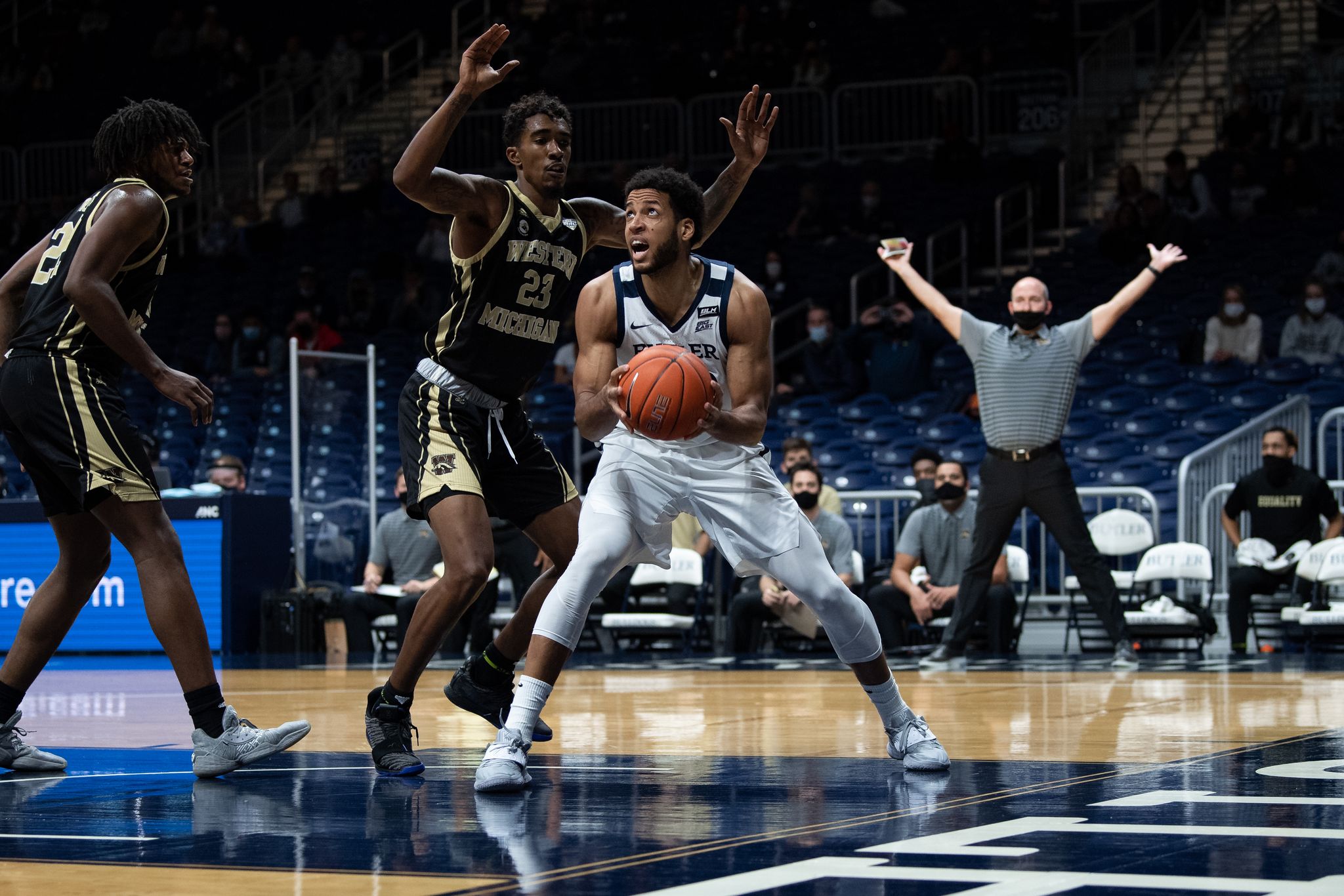 Bryce Nze makes a move under the basket in this year’s season opener vs Western Michigan. Nze grabbed a game-high 10 rebounds in Butler’s last game versus Indiana. Photo by Zach Bolinger.

Coming off a loss in the Crossroads Classic to Indiana, the Butler men’s basketball team welcomes the Southern Illinois Salukis to Hinkle Fieldhouse. The Salukis are undefeated on the season so far and are coming off a 12-point win over North Dakota. Here is everything you need to know.

Who: Butler vs. Southern Illinois

1. Southern Illinois is one of the few teams in the country younger than Butler

There are very few things that are more valuable in college basketball than having experienced players. While a program like Kentucky routinely gets the top talents from the high school ranks every year, there is a reason they relatively struggle to begin each season. Butler has experienced these growing pains firsthand as freshmen have been the leading scoring class in each of their first three games this season. The Salukis, however, are even younger than the Bulldogs. Three of four leading scorers from last year’s SIU team graduated. Senior Anthony D’Avanzo is the only upperclassmen that regularly sees the floor, and the average years of experience per player on this team is 0.7. So far, this inexperience hasn’t proven to be a problem for Bryan Mullins’ team as the Salukis are 5-0 for the first time since the 2015-16 season. While Butler will be the best opponent SIU has seen this year by far, the Salukis’ lack of experience has not affected them in the loss column this year as of yet.

Through five games, the two young studs leading the Salukis have been sophomores Marcus Domask and Ben Harvey. The 6’6 Domask actually led the team in total points last season as a true freshman and is an all-around player with a statline of 16 points, 5.2 rebounds and 3.6 assists per game this season. Harvey, on the other hand, redshirted last season after transferring from in-state Eastern Illinois. While Domask has shot an underwhelming 22 percent from beyond the arc this season, Harvey is clearly the marksmen of the two, shooting a scorching 53 percent from deep through five games. If these two get hot in Hinkle, the Salukis have the ability to make Butler sweat like they did in the season opener against Western Michigan.

2. Butler’s 3-point defense will be put to the test

Albeit from a small sample size, one of the concerns for this year’s Butler team has been their inability to defend against the 3-point shot. The Bulldogs’ opponents this season are averaging nearly nine made 3-pointers per game this season while Western Michigan, Villanova and Indiana were all able to shoot it efficiently — each shooting the deep ball at a 43 percent clip or better. Southern Illinois will hope those troubles continue in Hinkle on Monday. While the Salukis don’t launch in an insane number of attempts per game, they currently rank fifth in the country in 3-point percentage, ironically making 43 percent of its 3-pointers this year. If the country’s longest home non-conference winning streak will fall by night’s end on Monday, the culprit will likely be SIU’s ability to attack Butler’s defense from deep. While Aaron Thompson is currently listed as questionable for this contest, his presence would be a big help in this category for the Bulldogs.

3. The Bulldogs should have no problem keeping SIU to one shot

Bryan Mullins’ strategy on rebounding seems to be limiting transition and committing all five players to secure the defensive rebound. SIU ranks near the bottom of the country in offensive rebounds per game — just 5.4 in each contest so far this year —, but grab a whopping 30.6 defensive board per game, good for top 40 in the country. The Salukis seem to want to limit the transition game on both sides of the ball, which is a good idea considering the Bulldogs will certainly be the superior team athletically on Monday. This will force Butler to execute in the half-court on both sides of the ball and make shots. SIU will look to contain Bryce Nze on the offensive glass, but that is much easier said than done. While one of the Bulldogs’ most glaring weaknesses on the young season is their horrid free throw shooting on the year at less than 60 percent, it may not be a back-breaker. SIU simply doesn’t foul. The Salukis rank in the top 20 in the country in fewest free throw attempts allowed in the country. While Butler’s poor shooting from the charity stripe will eventually come back to bit them, don’t look for it to be a huge issue in this one.