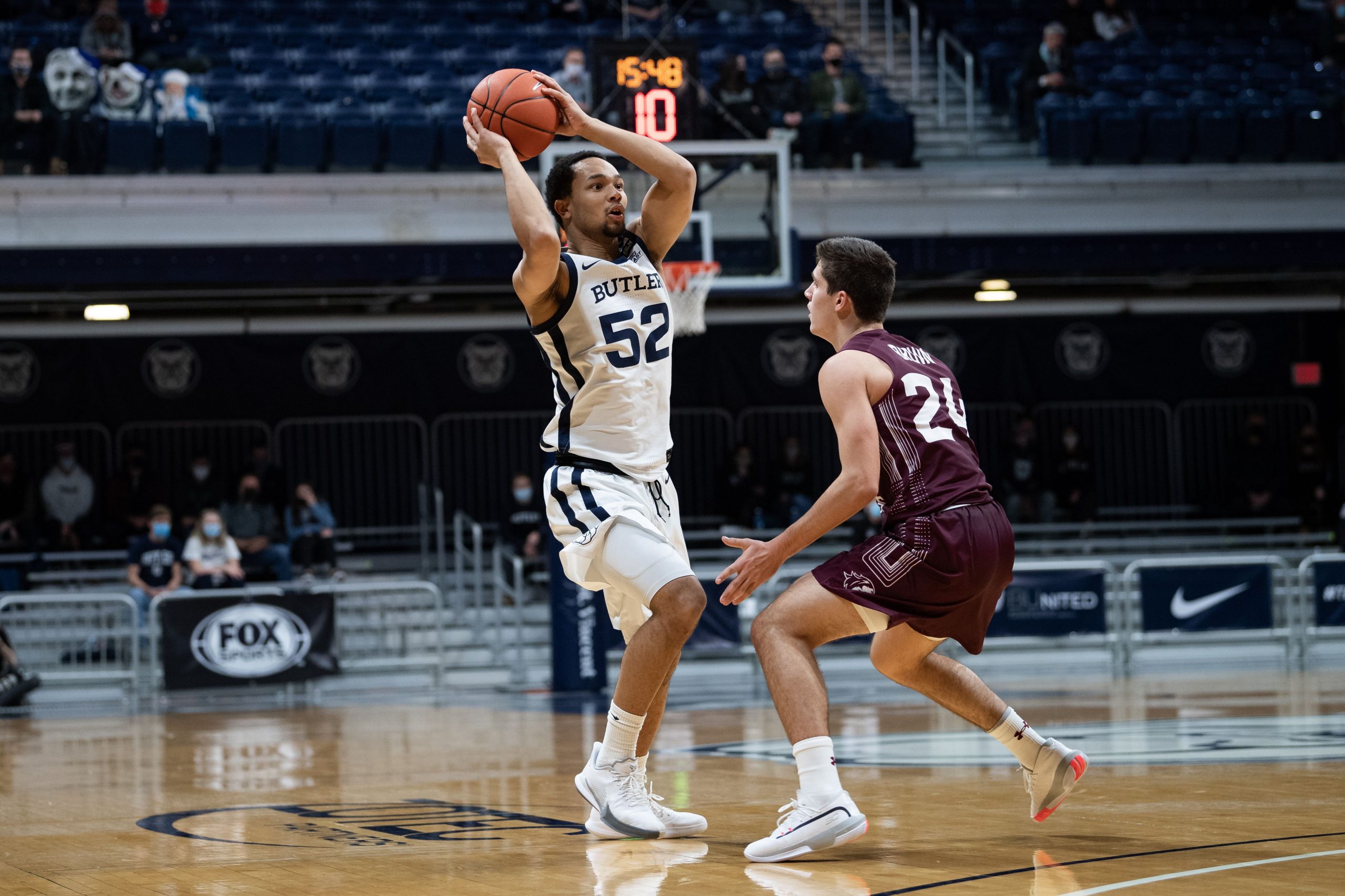 Butler’s 59-game non-conference home winning streak was snapped on Monday night as the Southern Illinois Salukis came into Hinkle Fieldhouse and defeated the Bulldogs, 76-73. Butler drops to a 1-3 record for the first time in at least the last 20 seasons. We go beyond the box score in the Bulldogs’ first home loss of the season.

Some performances can be attributed to a statistical anomaly. Every now and then, a team or player gets hot, and you lose the game from a flukey performance that likely won’t happen again the next time you take the floor. That is unfortunately not the case for Butler’s 3-point defense through their first four games of the 2020-21 campaign. Through games against Western Michigan, Villanova and Indiana, Butler had allowed its opponent to shoot 43 percent or better from beyond the 3-point line. That streak continued on Monday night as the Salukis shot 9-for-19 from long range, including a 5-for-7 breakout performance from Trent Brown. This shouldn’t come as a surprise, either, as SIU came into the game as a top-5 team from the country in 3-point percentage.

Heading into Big East play, look for adjustments from Coach LaVall Jordan and staff because teams like Villanova, Creighton and Marquette will eat Butler alive if they can get wide open looks from long range. With athletes like Bryce Nze and JaKobe Coles playing many minutes as bigs, the Bulldogs could be able to switch ball screens to prevent those wide-open opportunities. And while we’ll give the freshmen the benefit of the doubt to adjust to Division-I caliber shooting, their defense will have to improve if this team wants to finish above its predicted finish in the Big East conference. Looking ahead, Providence shoots an underwhelming 28 percent from deep.

2. The future is *still* unbelievably bright for this group

While many have lauded the future of the program, we had yet to see a freshman step up and take the go-to scorer role in this offense. Aside from Aaron Thompson in the session opener, Jair Bolden led the Bulldogs in scoring the past two games while no freshman was able to score more than 12 points in a game. Tonight, Chuck Harris was able to find a groove that Butler fans have seen before in the play of Kamar Baldwin. In one stretch in the second half, Harris scored 15 straight Butler points to nearly single-handedly pull the Bulldogs back into this ballgame. In a game where Bolden was finding many open looks due to a good Saluki defense, Harris stepped right in to run the offense and produce offensive numbers that few were expecting from him this early in the season.

When Harris was forced to leave the game due to foul trouble, Myles Tate confidently stepped into that role to help facilitate the offense through scoring or feeding Nze and Bryce Golden late in the game. This type of confidence is uncanny for a freshman playing in their fourth game in a college uniform while playing through a global pandemic. While this season may be one of the more frustrating in recent Butler history, these games will not be a recurring theme if Harris, Tate and company continue to develop at this pace. The freshmen group collectively impressed again scoring nearly half — 36 of 73 — of the Butler points on the night.

3. Southern Illinois is a better team than the average fan gives them credit for

In this program and in this building, every loss is disappointing when the Butler Bulldogs are in their home whites. But fans should realize just how good this Southern Illinois team was tonight and will be throughout the rest of the season. SIU is now 6-0 on the season and continuing to improve as a cohesive unit. Marcus Domask absolutely deserves the credit for this win by playing lights out scoring 26 points on over 50 percent shooting while playing every single second of this ballgame. If head coach Bryan Mullins is able to get even a sliver of that performance on a nightly basis, the Salukis could win the Missouri Valley Conference.

This film will be very useful for the Bulldogs as they progress through the Big East schedule as Jordan mentioned in the postgame presser. SIU plays similarly to a Creighton or a Villanova, the two best teams in the conference. Getting this experience and this feeling of losing to a quality opponent can only mean good things moving forward for this group.

While it may sound like I am extremely bullish on this losing performance, let it be known that this is still a disappointing loss for Butler. A 59-game winning streak being snapped does not feel good in any way. However, breakout performances like Chuck Harris’ tonight are reason for hope for the future in Hinkle Fieldhouse.