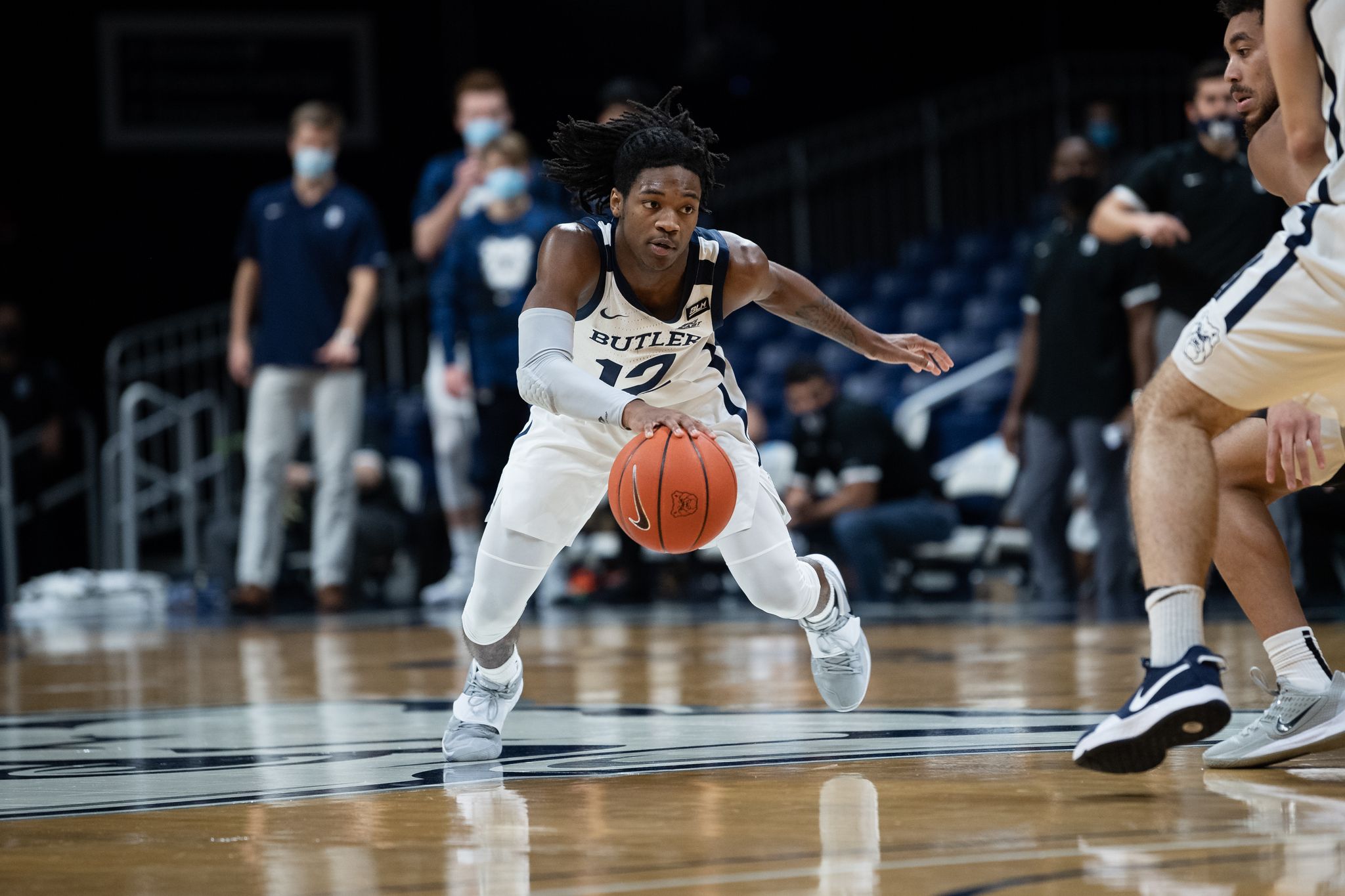 Myles Tate maneuvers around a ball screen in Butler’s 70-64 win over Providence on Dec. 23. Tate led the team in rebounds and assists in the win. Photo by Zach Bolinger.

The Butler men’s basketball team will look to improve its Big East record to 2-1 on the season when it takes on Providence in a rematch at Alumni Hall in Rhode Island on Dec. 30 as their last game of the 2020 calendar year.

In their last two games, the Bulldogs fell to Southern Illinois by three points and these Providence Friars by six points.

The Friars, on the other hand, defeated DePaul, 95-90, in double overtime on Dec. 27 after losing at Hinkle Fieldhouse on Dec. 23.

Coming in, Providence sits fourth in the Big East with a 2-1 record in conference while Butler is tied for fifth with a win and a loss in league play. Here’s what you need to know as the Bulldogs prepare for this rematch.

While rest with college basketball players is not as hot of a topic as it is with their professional counterparts, these two teams will be coming off vastly different rest schedules over the past week. After playing four games in eight days, Butler has had six consecutive days off from game action while the Friars fit in a game with DePaul in that stretch, with the Blue Demons taking Providence to two extra overtime periods on the road.

Contrary to the Bulldogs’ scoring distribution, the Friars’ production mainly comes from their top two players — David Duke and Nate Watson — who score 19 points a piece. With Duke and Watson logging 49 and 43 minutes respectively on Sunday, heavy legs should be expected for this Friar squad.

Coincidentally, Providence came off an overtime game when they faced the Bulldogs at Hinkle Fieldhouse just a week ago; the Friars shot 4-for-26 from 3-point range as a result. While not a great shooting team on full rest, fatigue could be a part of the equation from Alumni Hall.

2. The Friars finally got some help outside of their “big two”

While Duke and Watson are about as reliable as scorers get in college basketball — each scoring in double figures in every game so far this season —, Providence has gotten little support from their supporting cast. Before their most recent game against DePaul, the Friars had not had a player not named Duke or Watson score more than ten points since Dec. 2. While Duke and Watson are All-Big East talents, Ed Cooley’s squad was not seeing the offense perform consistently while the opposing team could pinpoint its gameplan to two players.

In the double-OT win over DePaul, Providence got a big performance from one of their starters who had struggled mightily to begin the season: AJ Reeves. The 6’6 junior shot 1-for-10 from the field in the loss at Hinkle last week, missing all seven of his 3-point attempts. In fact, prior to Reeves’ 22-point outburst last game out, he had made just seven of 39 from deep; he hit four of ten against the Blue Demons. For a team that lacks consistent outside shooters, Reeves could be an X-factor for Ed Cooley’s group that could be the difference in a critical Big East game.

While Butler had issues in their first four games with 3-point defense, they’ve had an opportunity to practice, which they were not able to for an amount of time. Which brings us to the final point:

In addition to a two-week lockdown due to COVID-19 protocols, the Bulldogs played in four games in an eight-day span, limiting their ability to get significant work in practice to learn from past games. While players did return home for the Christmas holiday, Butler players have been back on campus since Dec. 26.

Coach LaVall Jordan also said the team has just now been able to scrimmage five-on-five in intersquad practices as Campbell Donovan and Mike Parker are now fully back to practice. This could explain the early struggles on defensive rotations as the team as the Bulldogs literally could not field a game-like scenario in practice.

Senior point guard Aaron Thompson’s knee injury is questionable for the contest. Jordan said Thompson’s condition has improved over the holiday break and he is practicing at least in a limited capacity, but Butler fans will likely have to wait until shortly before tip to see if No. 2 will be available. Thompson currently leads the team in scoring average with 17.5 per game.