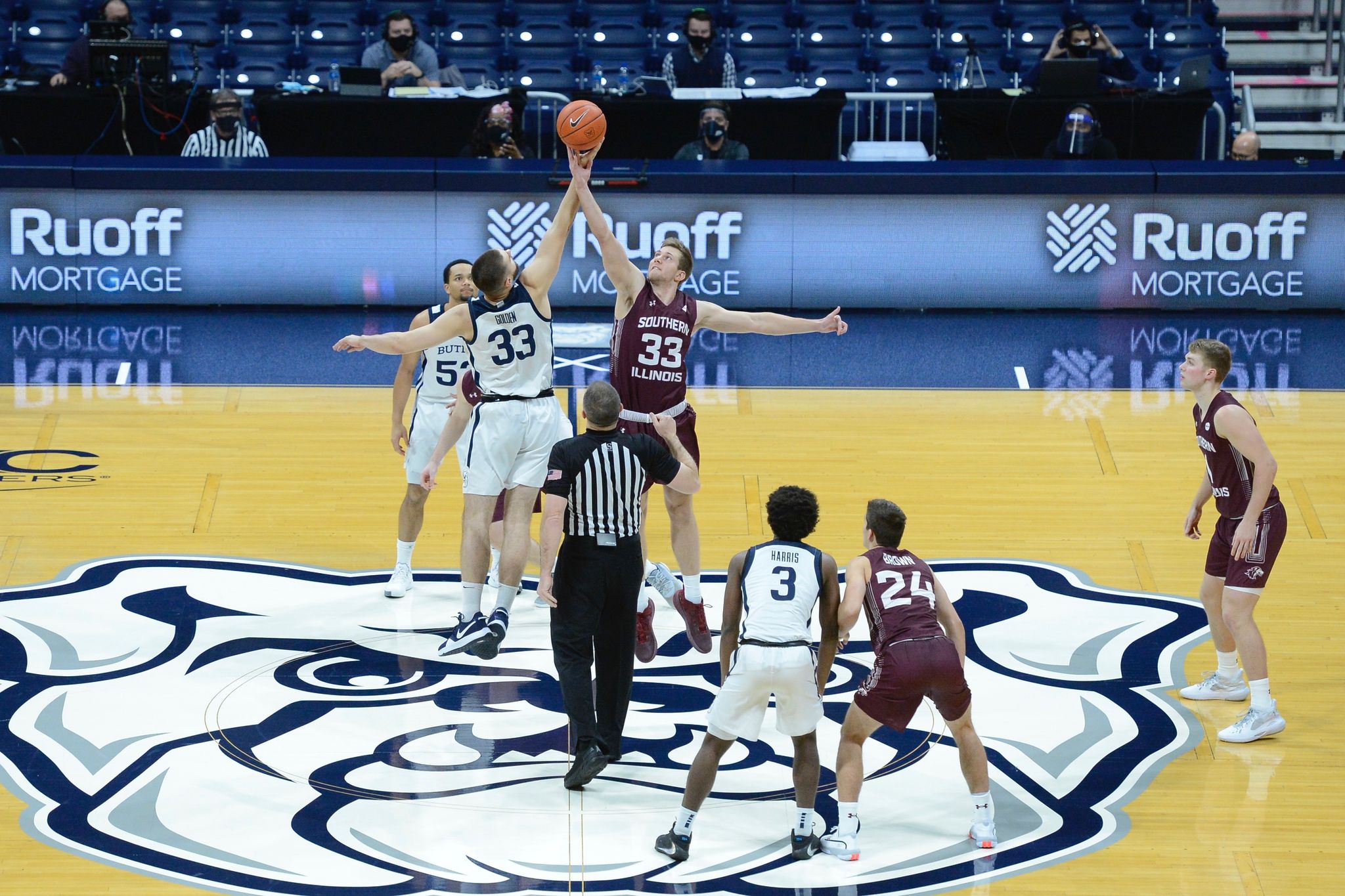 Tipoff between Butler and Southern Illinois in the Salukis’ 76-73 win over the Bulldogs on Monday. Butler quickly returns to Big East play with a home game against Providence on Dec. 23. Photo by Zach Bolinger.

After dropping to 1-3 for the first time since the 1998-99 season, the Butler men’s basketball team quickly returns to Big East play on Dec. 23 against Providence. The Friars are 5-2 on the season and are recently coming off a 80-77 overtime victory on the road at Seton Hall in their conference opener on Dec. 20. Here’s what you need to know before this Big East clash:

1. Providence is led by its two dynamic scorers

The Friars’ third-highest leading scorer is averaging just 7.6 points per game, but that may not be a big issue when their top two can combine for nearly 40 in a night. Ed Cooley’s bunch is led by junior and preseason All-Big East First Team selection David Duke and senior and preseason All-Big East Second Team selection Nate Watson. The pair are averaging 19.4 points and 19.3 points, respectively.

Duke, a former top-50 recruit out of high school, has proven to be an all-around player so far this year for Providence, pairing his 19 points per game with 5.3 boards and 3.4 assists per contest. Duke has also improved his already solid 3-point shooting percentage from last season to a scorching 46.7 percent through seven games. Butler will need to focus on how they want to slow down this inside-out combination of Duke and Watson.

2. Providence is not built to exploit Butler’s weaknesses

Despite the concerns on the offensive side coming into the year, the defensive side of the ball has been much more of an issue for the Bulldogs this year. Butler is allowing its opponents this year to shoot 51 percent from the floor, 53 percent from inside the 3-point line and 46 percent from outside it so far this year on average, some of the poorest marks in the nation.

Unlike Southern Illinois, Providence won’t be looking to shoot those long-range shots with much regularity and when they do shoot them, they haven’t been doing it very well this year. Despite Duke’s efficiency from deep, he only makes two 3-pointers a game on average and AJ Reeves, the only other player to attempt three or more 3-pointers a game so far this year for Providence, is only hitting them at a 21 percent clip.

3. Butler needs to continue limiting their opponents to one shot on defense

Few Butler fans would expect the Bulldogs to be ranked in the top 5 in any statistical category this year, but they actually are. Butler has allowed the second-fewest offensive rebounds to their opponents this season — just 4.5 per game through four games. While Providence doesn’t have great rebounding numbers throughout their seven games, the Friars got after Sandro Mamukelashvili and the other Seton Hall bigs in their conference opener, snaring 12 offensive boards against the Pirates.

Both the Bulldogs and the Friars play at a relatively low tempo, so preventing those extra possessions via the offensive glass will be key to avoid back-breaking second chance points on the defensive end of the floor. Look for Bryce Nze to be the one getting a body on Watson as Nze has recorded two straight games with double-digit rebounds for Butler.

While scoring 49 points in the second half was a good sign, the Bulldogs are going to need to avoid a large scoring drought like the one they suffered through in the loss to Southern Illinois. If the Bulldogs can do that, they could be looking at snapping Providence’s eight-game Big East win streak dating back to last season.