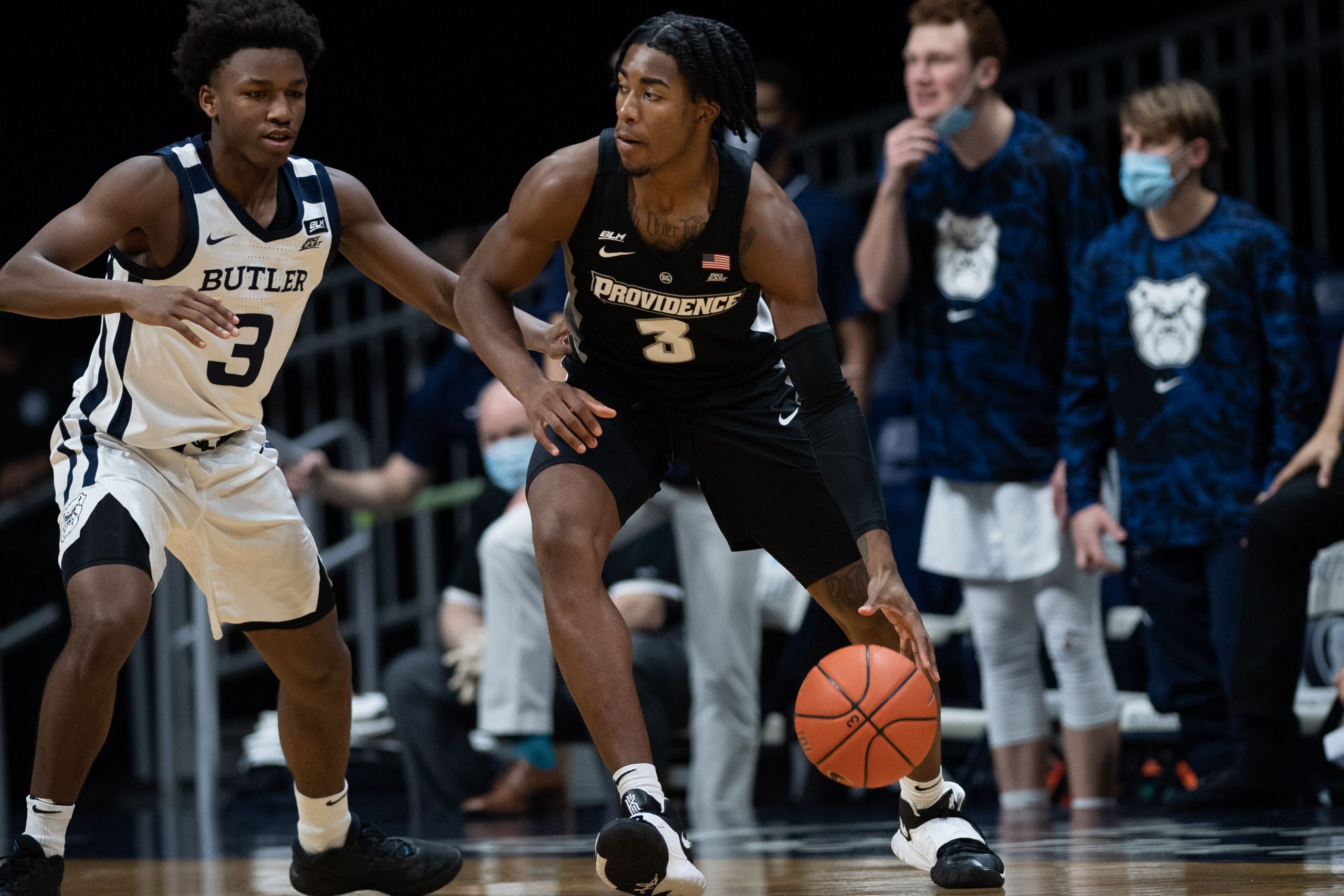 David Duke dribbles on the perimeter in Butler’s 70-64 win over Providence on Dec. 23. Duke notched 22 points, 13 rebounds, 8 assists and two steals in the Friars win in the rematch one week later. Photo by Zach Bolinger.

In a game that seemed a lot more lopsided than the final score indicated, the Butler men’s basketball team fell to Providence, 71-55, behind a slow start on offense that left the Bulldogs in a deficit too large to overcome. We go beyond the box score in Butler’s lost opportunity to sweep the regular season series against the Friars.

Coach LaVall Jordan would like a redo of Butler’s performance in the first half in Wednesday night’s game against Providence. The Friars connected on their first eight shots of the game, a span that lasted over half of the opening 20 minutes. While the Bulldogs remained in striking distance early on, Butler scored just three points in the final ten minutes before teams headed for the halftime locker room.

Bryce Nze was aggressive down low in the early going, scoring six early points including a poster dunk over a Providence defender. JaKobe Coles also chipped in an early six points with some skillful baskets, but the other freshmen were not able to find the bottom of the net. The Bulldogs scored just 18 points, just surpassing David Duke’s 17 points off flawless shooting from the field in the first half. This has become a trend for this year’s Butler team as lulls in the Southern Illinois and the first Providence game left the Bulldogs in a difficult deficit to overcome. The difference in tonight’s game was the Friars joined their stingy defense with efficient offense to separate themselves from Butler.

If the Bulldogs aim to be competitive in the conference this year, Jordan and co. will have to find a solution to the offensive struggles once the opposing team makes their initial adjustments.

2. Butler gave up too many easy looks on the other side of the floor

After forcing Providence to 41% shooting from the field and 15% shooting from beyond the 3-point line a week ago, the Bulldogs defense did not travel to Rhode Island and Alumni Hall. The Friars were efficient throughout all 40 minutes as the team connected on 60% of their field goals in the opening half and 56.5% in half number two. Providence — a less-than-average 3-point shooting team — also connected on nearly half of their treys just a week after struggling so mightily a week ago. Butler failed to limit the Friars two 19-point-per-game scorers David Duke and Nate Watson to 22 and 18 points, respectively. Duke knocked down nine of 11 field goals while adding team-highs with 13 rebounds, eight assists and two steals. Watson matched his perimeter counterpart with nine made field goals himself on 12 attempts.

That’s not to say, however, there weren’t any positives to take away on the defensive end of the floor. The Bulldogs forced 13 turnovers against a team that prides itself on taking care of the basketball. Butler also limited itself to 12 fouls on the night despite the Friars attacking the rim all night.

3. Butler limited its turnovers and found rhythm on O late in the game

While some may say it is unfair to evaluate in a game that was decided far before the final buzzer, the young Dawgs showed some fight before leaving Rhode Island. Myles Tate and Chuck Harris did not make a shot in the opening frame, but played confidently down the stretch, finishing with eight and 10 points, respectively. While the 39.4% clip from the second half isn’t exactly an ideal number, Butler committed just eight turnovers on the night and got into a rhythm in the final minutes to get within single digits. With the Bulldogs staying on the east coast before facing Seton Hall on Jan. 2, that rhythm and momentum on the offensive side of the court can certainly transfer from game to game. The Friars defeated the Pirates earlier this season, so by deductive reasoning, Butler could knock off Mamu and co. if they can find the bottom of the net.

With the loss, Butler falls outside of the top 80 in kenpom.com, a sobering thought considering the Bulldogs were a top 10 team in the country 365 days ago. Through 2020, Butler stands eighth out of 11 teams in the metric, exactly where they were expected to finish before the season began. In games like this one, it’s evident that expectations for Team 123 should be tempered. The lack of experience in this group may be its downfall in 2020-21, but these young Dawgs will learn from this season. Freshmen eventually become seniors and tonight’s frustrating loss does not detract from the bright future for this program.