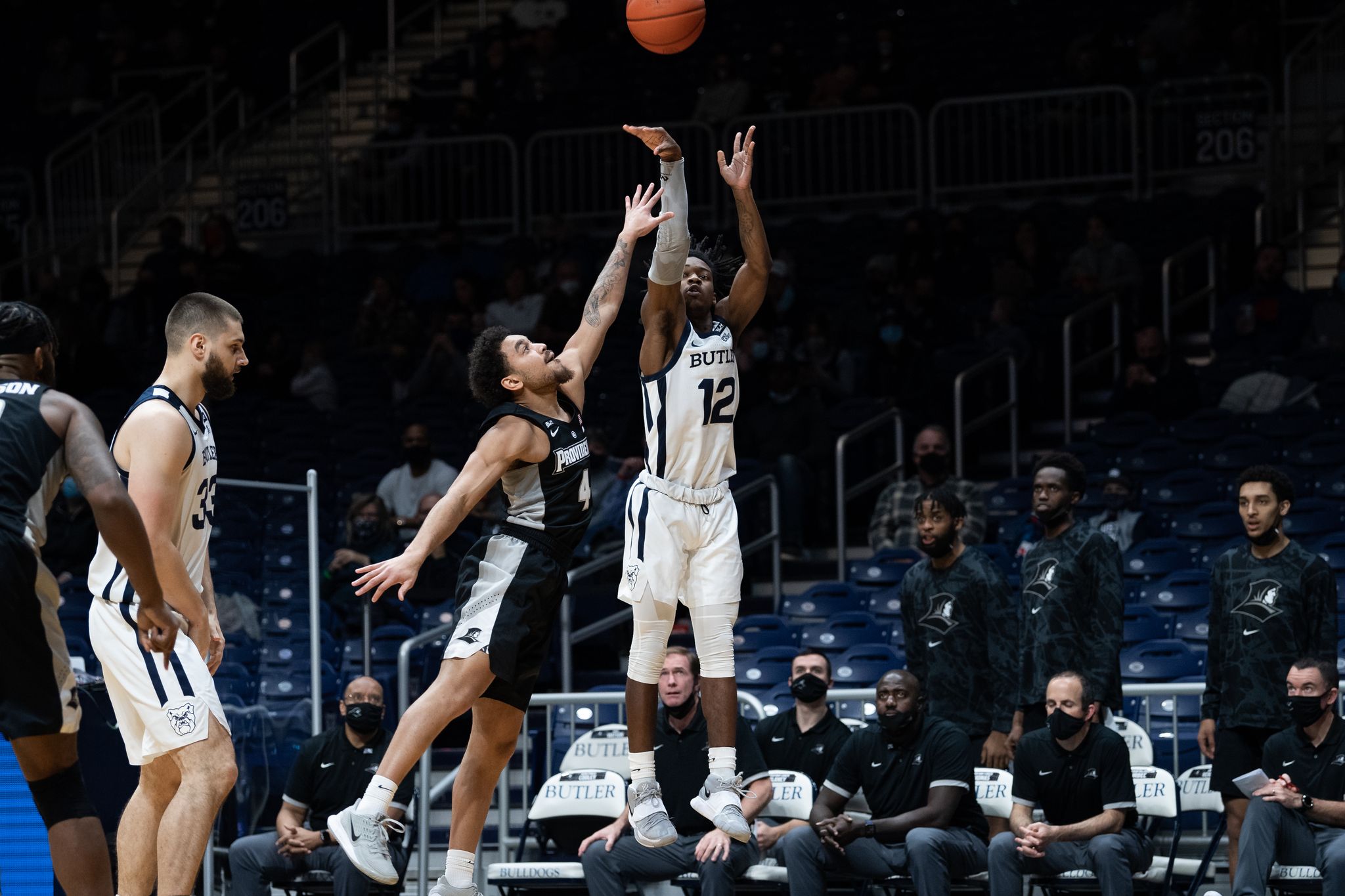 Myles Tate attempts a 3-pointer in Butler’s 70-64 win over Providence in their Big East home opener. Tate scored eight points and tallied a team-high eight rebounds and seven assists in the win. Photo by Zach Bolinger.

The Butler men’s basketball team defeated Providence 70-64 in their Big East home opener, snapping a three-game losing streak. JaKobe Coles led the Bulldogs in scoring with a career-high 14 points to send the Bulldogs to 2-3 on the season. Let’s go beyond the box score in a game that gave many Butler fans a sigh of relief.

1. Butler went into halftime with a lead and didn’t look back

Early on in Butler’s fifth game of the season, it seemed like a re-telling of all of their previous games. The Bulldogs got off to a quick start offensively, but endured two separate stretches where they made 1-of-7 shots and the Friars built up a lead as much as seven points early on. Unlike Butler did against Southern Illinois, the Bulldogs responded before the deficit got out of hand, outsourcing Providence 15-7 over the final 5:49 of the first half. Chuck Harris’ corner 3-pointer gave Butler a lead they would never give back. Ultimately, the Bulldogs’ poise was the difference between the loss on Monday and today’s win.

One of Butler’s most glaring weaknesses in their first four games was their lacking 3-point defense, allowing each of their opponents to shoot 43 percent or better from long range. On Wednesday night, the Bulldogs reversed that trend, forcing the Friars to shoot just 4-for-26 — 15.4 percent — from beyond the 3-point line. Whether the credit belongs to Butler’s defense or Providence’s inability to shoot it, the end result is not the same if the Friars are able to connect from long range. An interesting wrinkle throughout for Butler was their switch to a 3-2 zone featuring Myles Wilmoth at the top of the defense. Wilmoth’s length and mobility gives the opposition very few passing windows to move fluidly through their offense.

The freshmen on this Butler team have mainly been the talk of the 2020-21 season and rightfully so. The Bulldogs lost a lot of talent from a team that had all but punched their ticket to the 2020 NCAA Tournament and replaced Butler greats Kamar Baldwin and Sean McDermott along the way. While there have been growing pains along the way, this freshmen class has shown significant growth from the season opener against Western Michigan to now. JaKobe Coles is the fourth different leading scorer in five games for the Bulldogs, with the last two being freshmen — Harris scored 22 in Monday’s loss to SIU.

However, the most impressive aspect of this freshmen class is their confidence stepping in to big roles in big games. Coles scored 14 points in 13 minutes on Wednesday, shooting 4-of-5 from the field and 6-of-7 from the foul line. Myles Tate handled point guard duties the majority of the second half and grabbed a team-high eight rebounds. As previously mentioned, Wilmoth came in the top of the zone and scored a career-high six points, four of which came from offensive rebounds. And even while Harris was contained by fouls nearly the entirety of the second half, he still managed to knock down both of his 3-pointers and score double digits — 10.

The experienced players on this team deserve credit too. Bryce Nze and Bryce Golden are coming into a form that they enjoyed last season and handled Providence’s physical bigs well. While Jair Bolden has not scored the ball as effectively than in his first two games, he looks more comfortable in the offense and scored some of the biggest buckets in the game via the fall-away fade jumpshot in the paint. Over the next few weeks, Butler will have an opportunity to get more reps in practice than they have over the past week and will continue to grow together and play as a cohesive unit.

3. Efficiency on 3-pointers and free throws is still a problem for Butler

Despite the win, some of the Bulldogs’ biggest weaknesses from games played earlier in this season were yet again a recurring theme on Wednesday night. Butler shot just 5-of-17 from behind the 3-point line, which has been a concern for this team since before the season started. Bolden and Tate combined for 2-for-11 shooting from deep, which will need to improve as the Big East schedule gets tougher down the road. On a similar note, the foul shooting so far this season from the Bulldogs has been underwhelming at best. Butler came into the meeting shooting just 63 percent and couldn’t even reach that mark against the Friars with a 13-for-23 performance. Surprisingly, the misses largely came from the seniors, as Nze was 1-4 and Bolden was 2-6. Butler is sure to be in close games as Big East play resumes and that percentage must be better if the Bulldogs expect to hold on to games down the stretch.

Many disappointed Butler fans took to social media after the loss to Southern Illinois to air their frustrations. Tonight’s performance from the Bulldogs proved that the sky is not falling in Hinkle Fieldhouse and while the emphasis for this team has been on the future, the current team can win some ball games, too. Don’t forget Butler will get Aaron Thompson and Christian David back at some point in the season. Something tells me this win over Providence won’t be the most impressive at year’s end.