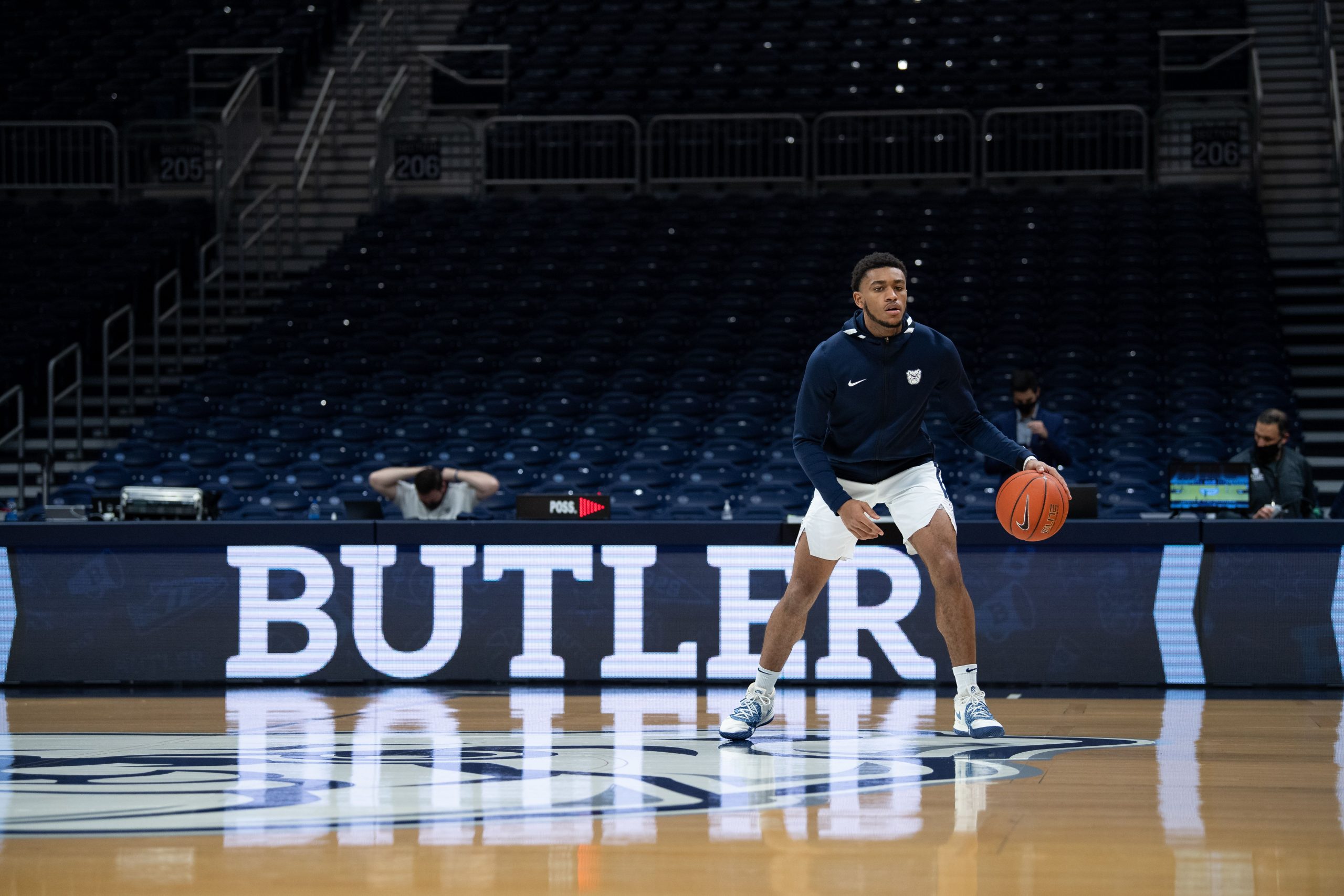 Aaron Thompson warms up before this year’s season opener versus Western Michigan. As of publication, Thompson is questionable for Saturday’s game against Indiana with a sprained knee. Photo by Zach Bolinger.

Coming off a 19-point loss to No. 7 Villanova in their first game back from a COVID-19 pause, the Butler men’s basketball team turns its attention to the Crossroads Classic where they’ll face Indiana on Dec. 19 at Bankers Life Fieldhouse. The Hoosiers, who received votes in the latest AP poll, defeated North Alabama by 35 points in their most recent game. Here’s what you need to know for this in-state rivalry.

Who: Butler vs. Indiana

1. If the Hoosiers can be consistent, this may be Archie Miller’s best team yet

Last season, expectations were high for Indiana in Archie Miller’s third year in Bloomington, and the Hoosiers were making a late-season push to appear in their first NCAA Tournament appearance since 2016 if not for the COVID-19 pandemic. The Hoosiers finished with a 20-12 record and an 11th-place finish in the uber-competitive Big Ten. The team defeated Nebraska in the first round of their conference tournament before the shutdown of the season.

This year’s team, however, could be Archie Miller’s best yet in Bloomington. While the Hoosiers lost two of its top three scorers from a season ago — Justin Smith transferred to Arkansas and De’Ron Davis graduated —, the engine of this team is clearly sophomore superstar Trayce Jackson-Davis. Through six games, the Indianapolis native has already improved his scoring output over 50 percent from last year when he was named an All-Big Ten third team selection.

So far, Jackson-Davis’ breakout has yielded success on the court for Indiana. The Hoosiers have made statements in wins over tournament-hopefuls Providence and Stanford in the Camping World Maui Invitational, with their two losses being Texas and Florida State — in overtime —, two teams currently ranked in the top 15 of the AP poll.

2. Indiana wants to pound the paint and rely on its calling card: its defense

The Hoosiers were near the bottom of the country based on how many 3-pointers they got up over the course of the game last year, most likely due to the fact that they didn’t shoot it at a very good clip — 32 percent. However, these short shots prevented long rebounds and allowed Miller’s squad to set up the strong suit of both years’ teams: the defense. Indiana currently ranks among the top 35 teams in the country in both field goal percentage and 3-point percentage allowed. Against a Butler team that is still looking to establish its offense in the third game of the season, look for the Hoosiers to attack the Bulldogs on that end of the court.

Largely thanks to Jackson-Davis, Indiana is near the tops of the country in blocks. Even though Bryce Golden will be available for the Bulldogs on Saturday, it will be critical for Butler’s Golden and Bryce Nze to find ways to draw fouls against Indiana’s star big man, rather than go up soft and get their shot sent into the third row.

3. Butler’s health remains a critical wild card to this game

As of writing this, Butler’s starting point guard Aaron Thompson is questionable for the matchup with the Hoosiers after straining a ligament in his right knee against No. 7 Villanova on Wednesday. Should Thompson be unavailable on Saturday, this would force Chuck Harris or Myles Tate — both true freshmen — into that starting guard role against Indiana’s stingy defense. While in years past, Thompson is mainly known for his defense and facilitating capabilities, he is the leading scorer for the Bulldogs through two games at 17.5 points per game.

On Friday, fans learned Bo Hodges was deemed academically ineligible for the season, but the team also announced that Bryce Golden would be available for the game with the Hoosiers. In a game where limiting Jackson-Davis’ damage will be the key, having Golden as an extra body is crucial for the Bulldogs.