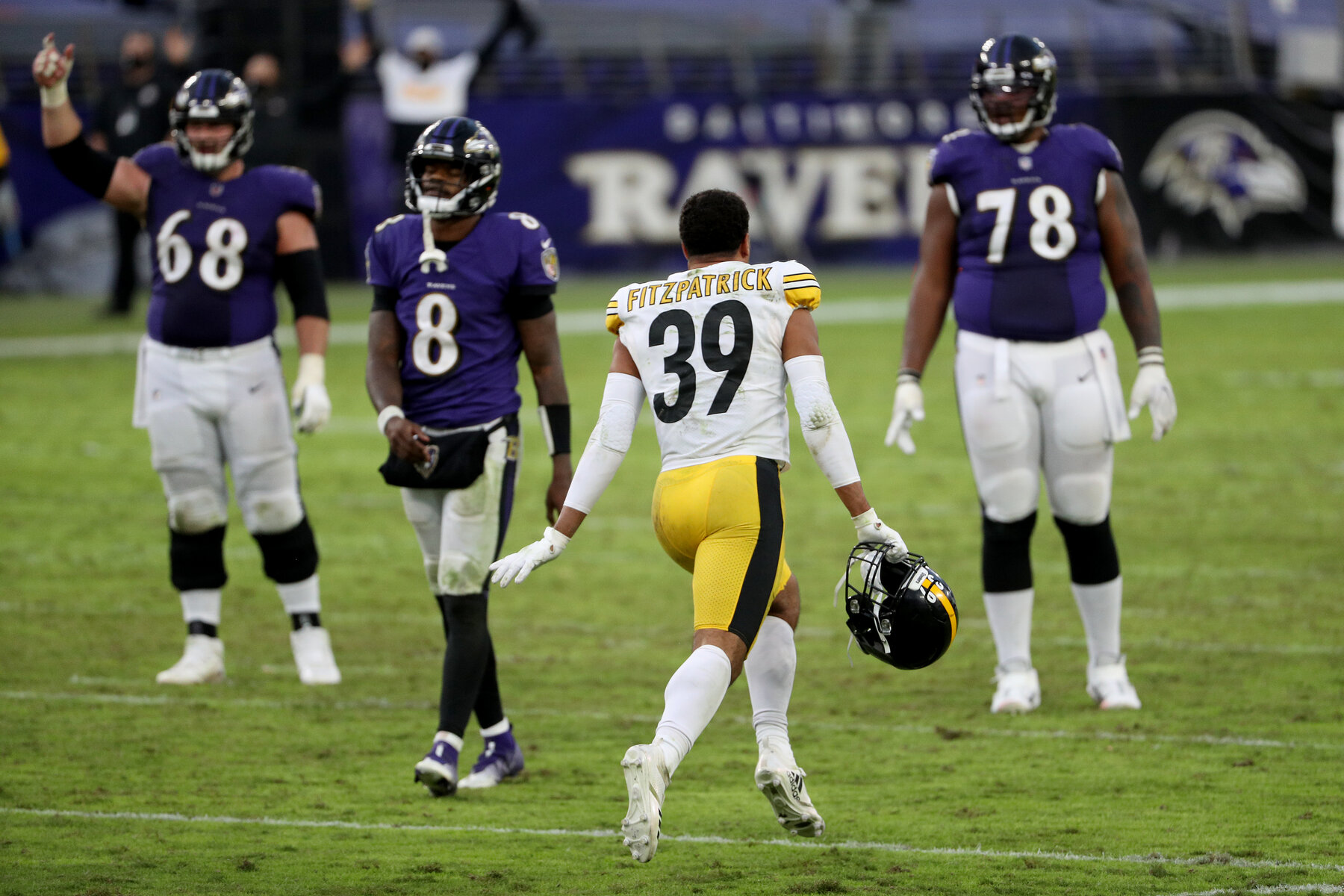 Pittsburgh Steeler Minkah Fitzpatrick celebrates after a play versus Lamar Jackson and the Baltimore Ravens. Jackson turns around to play yet another tough defense in the Indianapolis Colts. Photo courtesy of The New York Times.

While there was plenty of hype headed into the trade deadline on Tuesday afternoon, the expectations turned out to be too high. There were many players rumored to be on the move like John Ross and Will Fuller, but by the end, the only player that was traded was another no-name wide receiver in Isaiah Ford from the Dolphins to the Patriots.

Although there were no major trades happening at the deadline, the amount of injuries stacking up — especially in the running back position — means finding a starting running back is getting harder and harder. Players like Joe Mixon, Nick Chubb and Miles Sanders are stuck on a bye this week as well as injuries to Myles Gaskin, Chris Carson and Raheem Mostert have led many fantasy owners in search of new options for this week. Here are the key players to start and sit for Week 9 of the NFL season.

Cam Newton, New England Patriots. The dynasty is officially over. The Patriots haven’t started a season 2-5 since 2000 — Bill Belicheck’s first year of coaching. The signing of Newton has looked to be a little rough as Newton has not thrown a single touchdown to a wide receiver or tight end all season long. However, Belicheck has chosen to continue to trust Newton with the starting role. As much as Newton has struggled as of late, he could find a way to make a comeback against the winless Jets and their atrocious defense. If anyone still has Newton on their rosters, he would be a great player to sneak into the starting lineups for this week.

Lamar Jackson, Baltimore Ravens. The Madden curse is real. After his MVP performance last season, Jackson has been out to a rough start. Jackson hasn’t only surpassed 300 passing yards once this season as well as having a turnover in every game since Week 3. In Jackson’s last game against the Steelers, he had two interceptions and two fumbles lost. Jackson just hasn’t been the same player he was last season and that will likely continue this week against the Colts. Similar to the Steelers, the Colts have been one of the toughest defenses in the NFL. They rank second in points allowed and yards per game this season. As long as Jackson continues to struggle, he should stay on the bench.

James Conner, Pittsburgh Steelers. The city of black and gold remains undefeated for another week. After an exciting back-and-forth game against the Ravens, Conner and the Steelers proved to be too much. Conner finished an average day with 60 yards and a touchdown against one of the harder defensive fronts in the league. His performance should see a major rise this week as they have an extremely favorable matchup against the Cowboys who have a league leading 1,367 rushing yards through eight weeks. Conner is destined for a major outing against a weak Dallas defensive front.

Antonio Gibson, Washington Football Team. The rookie out of Memphis is finally living up to all the hype. In his last game against the Giants, Gibson recorded over 100 yards rushing for the first time in his career after finishing with 128 rushing yards and a touchdown. Gibson had a team-leading 20 touches while his counterpart J.D. McKissic only had five. Gibson has finally proven to be the new lead back for Washington. Only issue, they are up against a Giants defense that ranks seventh against the run. In their last game, they were able to limit the Buccaneers two-headed monster in Ronald Jones and Leonard Fournette to a combined 75 yards. Even though Gibson’s potential as a reliable running back has continued to rise, his matchup against the Giants is enough to leave him on the bench for this week.

Brandin Cooks, Houston Texans. After starting 1-6 in the first half of the season, the Texans are fresh off their bye week and ready to redeem themselves in the second half. The Texans have had the hardest schedule in the NFL though the first eight games of the season. All this changes as they are now up against a Jaguars defense that has given up the second most yards per game in the league with 424.4 yards. For Cooks, this matchup is spectacular as in his last game against the Jags earlier this season, he had 161 receiving yards and a touchdown. This week, Cooks has a solid matchup making him a must-start in almost every league.

Christian Kirk, Arizona Cardinals. Through the first half of the season, the Cardinals have the number one offense in football. They have been able to put up a league-leading 419.1 yards per game. This has been due in part to their high-powered offense with great wide receivers like Kirk, who in his last two games alone, has scored four touchdowns. Although the Cardinals offense has been on fire, they are up against an underrated Dolphins defense who have held opposing offenses to a league-least 130 total points through eight games. Kirk is hard to trust in one of the toughest matchups he has faced all season.

T.J. Hockenson, Detroit Lions. The Lions hopes and dreams of making the playoffs have come crashing down. In their toughest test yet this season, the Lions were blown out by the Colts, 41-21. The Lions’ suffering didn’t end there as Kenny Golladay ended up going down with a hip injury along with Matthew Stafford being moved onto the COVID-19/injured reserve list. Now that those two players are now out for at least two to three weeks, the Lions will rely heavily on Hockenson to perform well. This week, the Lions are up against the Vikings who have given up the 7th-most receiving yards this season. With a favorable matchup and an increase in targets, Hockenson should be moved off the bench immediately.

Jonnu Smith, Tennessee Titans. Ever since Smith injured his ankle in Week 6, Smith hasn’t been the same. Smith started off the year by finding the endzone five times in the first five games, but he has not scored since. This is due to the Titans going through a recent struggle on offense after losing to the 1-5-1 Bengals last week. Although Smith’s chance to get back on track will have to wait a week as they go up against an elite Bears defense that has limited opponents to the 7th-least total points in the league. Until Smith proves that he can get back into the endzone, he should stay out of all starting lineups.

Dan Bailey, Minnesota Vikings. In a more surprising game last week, the Vikings were able to upset the Packers in Green Bay. During this game, Bailey made all four of his extrapoints. While he failed to get a chance to kick a real field goal attempt, Bailey will have plenty of opportunities against a Lions defense that is giving up the 5th-most points per game. Bailey is a great kicker to pick up for fantasy managers in search of a replacement for a kicker on a bye.

Will Lutz, New Orleans Saints. Lutz and the Saints have been on a roll. In his last game against the Bears and their strong defense, Lutz was able to hit four out of five field goals as well as both his extra points. The Saints have been on a high-scoring streak, but that will likely end this week against the Buccaneers defense that ranks 7th in points allowed per game. There are plenty of other better kickers this week to trust than Lutz.

Green Bay Packers Defense. Last Sunday, the Packers accidently forgot to bring their rush defense to Lambeau Field. The Packers sat back and watched as their once-great rush defense was torched for 226 yards and four touchdowns by Dalvin Cook alone. The Packers will have an opportunity to redeem themselves against an extremely weakened 49ers offense. In the last week, the 49ers were forced to start their fourth-string running back, got obliterated by the Seahawks red hot offense and watched as their starting quarterback Jimmy Garopollo and tight end George Kittle became ruled out with injuries lasting up to eight weeks. With Nick Mullens now running the reigns in San Francisco, the Packers are an easy start for this week.

Buffalo Bills Defense. The Bills may be 6-2, but their record doesn’t show how much the Bills have been struggling on defense. After being hyped to up to be one of the top defenses in the league, the Bills have been far from it. They rank 16th in yards per game and 19th in points allowed per game. Unfortunately for the Bills, they will be up against Russell Wilson and the Seahawks third-highest scoring offense in the league. As the Bills continue to struggle on defense while the Seahawk offense continues to go off, the Bills defense needs to be moved onto the bench.