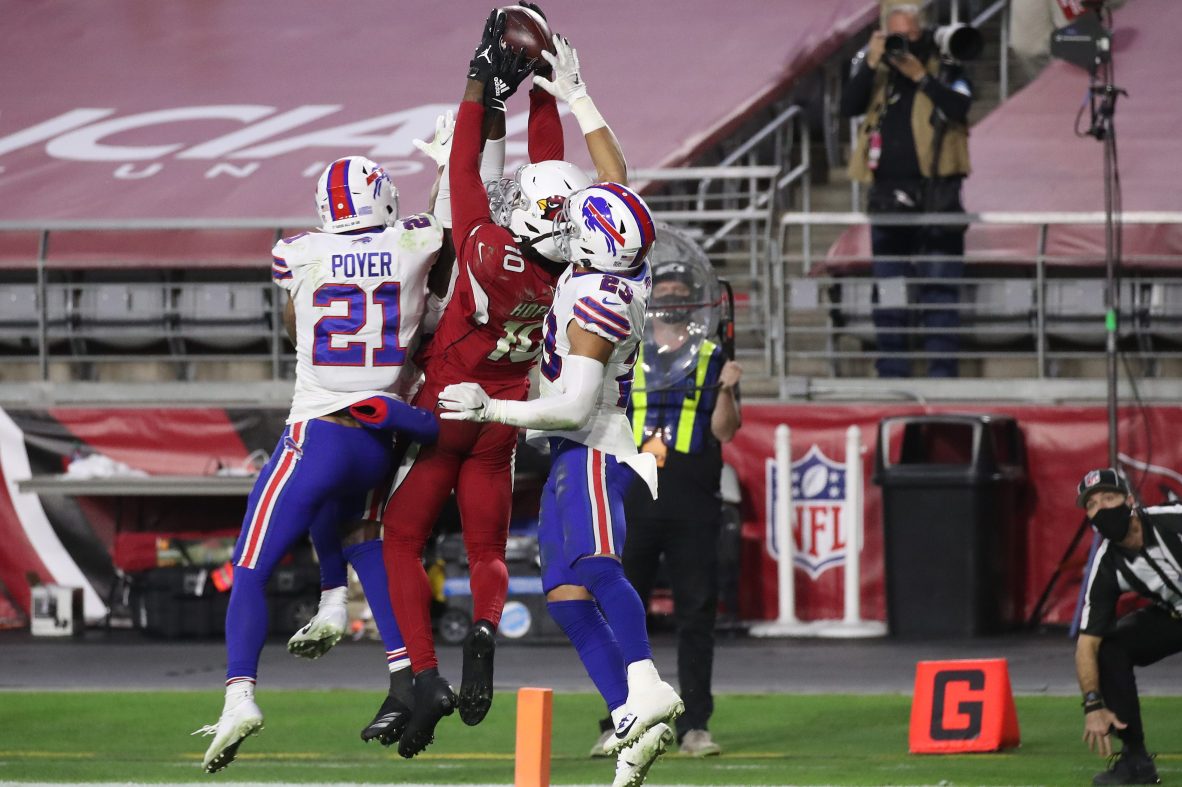 Cardinals WR DeAndre Hopkins hauled in a Hail Mary from QB Kyler Murray to cap the crazy action in Week 10 of the NFL season. The Cardinals turn quickly to face division rival Seattle on Thursday.

Kyler Murray’s game-winning Hail Mary to DeAndre Hopkins, Ronald Jones’s 98-yard touchdown and the monsoons in New England and Cleveland made Week 10 a week that fans will never forget. There was plenty of action for football fans to consume as well as great fantasy performances for most players. It is going to be very hard for this week to live up the same hype as last week.

However, there are plenty of great matchups and sneaky waiver-wire pickups for this week. Here are the key players to start and sit for week 11 of the NFL season.

Matt Ryan, Atlanta Falcons. The Falcons are fresh off a bye and ready to continue their winning streak. After starting the season 0-5 to start the season, the Falcons have won three of their last four games. For this week, the Falcons will look to continue their streak going against their NFC South rival in the New Orleans Saints. Ryan has always played great against the Saints with most of their games usually being shootouts. Ryan is a solid option for this week for fantasy managers looking for a quarterback.

Andy Dalton, Dallas Cowboys. The Red Rifle is back for the Cowboys after suffering a nasty concussion in a game against the Washington Football Team in Week 7. The Cowboys haven’t won a game since Week 5 and are in need of any help on offense. Dalton gave the Cowboys promise in his first few games, but when he got injured, all that hope was lost. However, Dalton’s return will get spoiled by a Vikings team that has let up 22 points or less in their last three games. There are plenty of better options available at the quarterback positions this week than Dalton.

Damien Harris, New England Patriots. The Patriots might actually have a fantasy reliable running back for once. After years of switching between four running backs throughout the years, Bill Belicheck has chosen to use Harris as their lead back. In the last game, Harris ran for 121 yards on 22 carries against a Ravens’ defense that ranked eighth in yards allowed per game. Now, Harris will face off against a Texans rush defense that is the exact opposite as they have given up a league-leading 1,507 yards through 10 weeks this season. Harris’s easy matchup means he will be a valuable starter for this week.

James Robinson, Jacksonville Jaguars. The Jaguars have looked dreadful in every aspect possible except for one spot in the running back position. They may be on a seven-game losing streak, but the undrafted free agent out of Illinois State University has been able to produce legitimate numbers each and every game. Robinson is ranked fifth in total yards this season, which is above notable players like Ezekiel Elliot and Kareem Hunt. This week, they are up against the Steelers defense that has given up the ninth-least rushing yards in the league. Some fantasy owners may be forced to start Robinson this week, but if there is an opportunity to sit him, it would be a smart idea.

Michael Pittman, Indianapolis Colts. Anyone outside of Indianapolis before this week had no idea who Pittman was until last week’s game against the Titans. In this game, Pittman exploded for a team-leading seven catches for 101 yards. Pittman has begun to carve himself a major role in the Colts’ offense taking away targets T.Y. Hilton, who has failed to even make it into the endzone once this season. Even though the Colts have a tougher matchup against the Packers this week, Pittman is worth picking up in the waiver wire as well as even starting.

Travis Fulgham, Philadelphia Eagles. Ever since he started off as one of the best waiver wire pickups for fantasy managers all season long, Fulgham’s production has plummeted. In a game where Fulgham should have had the opportunity to have another great game against the Giants, Fulgham was only able to bring in one catch for eight yards. This disappointment left many people questioning if he is still a reliable wide receiver. Any fantasy manager who picked him should be worried as he has another tough matchup against a Browns defense that has allowed the 15th-least yards per game. Until Fulgham is able to recover from his dip in production, he should remain on the bench.

Hunter Henry, Los Angeles Chargers. As usual, the Chargers lost another game by one possession. This devastating loss only extends to their two-game losing streak by one possession to three. Even though the Chargers keep blowing games, there is good news for them. This good news comes in the form of a team dressed in green and white otherwise known as the winless Jets that rank fifth in most yards allowed per game. As for Henry, his value as a reliable tight end continues to skyrocket as he is primed for another great performance against a diminished Jets team.

Rob Gronkowski, Tampa Bay Buccaneers. After an awful performance against the Saints two weeks ago, the Buccaneers played angry against their other division rivals in the Panthers. However, this was not enough to put them in the lead in the division. The Bucs may have looked recharged and ready last week against the Panthers, but they will have an even tougher matchup against a Rams’ defense that has given up the second-least yards per game to opposing offenses this year. The Brady to Gronk connection may be getting better each week, but this week’s matchup against a powerful Rams defense is enough to force fantasy managers to avoid putting him in the starting lineup.

Dustin Hopkins, Washington Football Team. After his gruesome leg injury 728 years ago, Alex Smith got another opportunity to be the starting quarterback for Washington. In his first game back he almost led an impeccable comeback against a Lions team, but a 59-yard game-winning field goal by Matt Prater spoiled his opportunity to do so. Despite the loss, Hopkins had a decent game making two of three fields and three extra points. Hopkins will have another opportunity to improve on his performance from last week against the Bengals defense that has given up the 22nd most points in the league. Hopkins has some fantasy this week in another favorable matchup against the banged up Bengals defense.

Stephen Gostkowski, Tennessee Titans. Gostkowski started off the season as the best kicker in fantasy football, but has since then been unable to score double digits. Gostkowski has seen a  drop in opportunities for field goals as the Titans have struggled to put up major points. This week, the Titans face the Ravens at home who have given up the least total points in the league this season. Right now, the Ravens’ matchup against the kicker should be avoided more than any other team in the league.

Miami Dolphins Defense. The Dolphins have begun to call themselves the “No-Name-Defense”, which is a term not heard since the Dolphins perfect season in 1972. After being considered the worst team in football last season, Brian Flores has been able to turn this entire defense around. The ‘Fins rank fifth in points allowed as well as the top-ranked special teams in yards and scoring this season. This week, the Dolphins are up against a Broncos offense that has struggled big time. Last week, Broncos quarterback Drew Lock threw four interceptions in a blowout loss against the Raiders. With the Dolphins defense only getting better with each week, they will remain a must start until proven otherwise.

Las Vegas Raiders Defense. Speaking of Raiders and their defense, they have also played very well lately. Last week, they forced four turnovers and held them to just 13 points scored all game. The only difference between the Fins and the Raiders is that the Raiders face former MVP Patrick Mahomes and the menacing Chiefs’ offense that ranks second in yards per game this season. Yes, the Raiders were able to upset the Chiefs last time the two met, but lightning doesn’t strike in the same place twice. The Raiders defense may be on the rise, but fantasy managers should beware of this week’s tough matchup against the Chiefs.