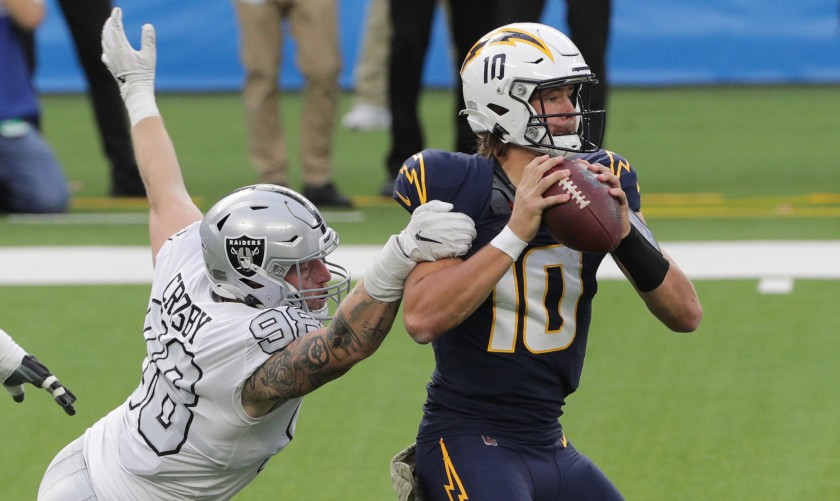 Justin Herbert avoids a sack versus the Las Vegas Raiders. Despite the Chargers’ team struggles, Herbert should still be a solid fantasy play moving forward.

As the fantasy football playoffs creep closer and closer, fantasy managers make last-minute adjustments to their teams. If the question was asked four months ago if the season would even make it this far, many would likely say no. However, against all odds, the NFL season has reached its double-digit mark for weeks.

The struggle for this week is the continuation of more injuries and bye weeks. Christian McCaffery made his return last week, but he would soon get injured again and will miss this week’s matchup against the Buccaneers at the minimum. Along with the injuries, some of the top fantasy players in the league like Patrick Mahomes, Tyreek Hill and Julio Jones are on a bye week.

These absences will force many fantasy managers to seek new options to help make the final push for the playoffs. Here are the key players for week 10 of the NFL season.

Justin Herbert, Los Angeles Chargers. Herbert and his glorious hair have been one of the few bright spots on a Chargers team that has been choking harder than the Falcons. Despite the struggles, the Chargers quarterback has been putting numbers good enough for him to win Rookie of the Year. Since he started in Week 2, Herbert hasn’t thrown for less than 250 yards passing at all this season. His connection with Keenan Allen continues to grow and will likely continue as they are up against a Dolphins defense that has given up the 22nd-most passing yards in the league. This week’s game is looking like a shootout against Tua Tagovailoa and the Dolphins. Make sure Herbert is in the starting lineups for this week.

Joe Burrow, Cincinnati Bengals. As the Nop. 1 pick in the 2020 NFL Draft, Burrow was thrown into the Bengals starting lineup in hopes of carrying their team in victory. The Bengals forgot to spend any more draft capital on worthy offensive linemen to be able to protect Burrow. Through nine games alone, Burrow has been sacked 28 times, which is the second most for any quarterback in the league. Burrow’s chances for having time in the pocket will only get slimmer as this week they are up against the mighty undefeated Steelers defense who have averaged a league-leading four sacks per game. Burrow has plenty of promise in the future, but this week’s matchup is enough to scare any fantasy manager from putting him in the starting lineup.

Kareem Hunt, Cleveland Browns. On the other side of Ohio, the Browns are fresh off a bye and ready to raise havoc. After failing to score a touchdown in their last game against the Raiders, the Browns will be looking for some revenge. Fortunately for the Browns, they are up against a Texans team that has allowed the second most rushing yards in the league this season. Nick Chubb may be returning for the first time since Week 4, but Hunt has established himself enough as the number one running back in Cleveland to be one of the more reliable starters in the league.

Chase Edmonds, Arizona Cardinals. A disappointing performance against the Dolphins’ defense last week left Edmonds’ fantasy managers wondering, is it Edmonds or is it just the Cardinals rushing offense? Edmonds was only able to put up a total of 70 yards on 25 carries against a Dolphins defense that is weaker against the run. Edmonds was supposed to be a great replacement for the other disappointing running back on the Cardinals in Kenyan Drake. Edmonds’ odds are not in his favor this week either as they will be up against a Bills team that held the blazing-hot Seahawks to just 57 rushing yards all game. As long as Edmonds continues to struggle to put up reasonable numbers, he should remain on the bench.

Robert Woods, Los Angeles Rams. Woods’ value as a fantasy wide receiver has been a boom or bust each week. Last time he played against the Dolphins, he was able to rack up 85 receiving yards and two touchdowns. In the two weeks prior, he could barely reach 30 receiving yards all game. Despite the inconsistency, Woods is primed for a great game against a Seahawks defense that is setting records and not in a good way. The Seahawks are on pace to give up 7,539 yards this season which would break the previous record held by the 2012 Packers defense by almost 1,000 yards. Woods is destined for another breakout performance against a Seahawks defense gifting every player hundreds of yards each game.

Chase Claypool, Pittsburgh Steelers. One of the more surprising rookies out of Notre Dame, Claypool has already carved himself a major role into the Steelers offense. In his last game, he was targeted a team-high 13 times in their win against the Cowboys’ weak secondary. The only issue about this was the fact that this game should have been a blowout. It is these “trap” games that force fantasy managers to think twice when starting certain players like Claypool. These concerns about the Steelers only get worse as the reports that quarterback Ben Roethlisberger being out this week have arisen. With Mason Rudolph now running the reigns for the Steelers, Claypool fantasy managers should beware of another disappointing game.

Dallas Goedert, Philadelphia Eagles. The Eagles may be in the worst division in football, but they are now beginning to pull away with the lead. The Eagles are on a two-game winning streak and fresh off a bye week, so they are ready to continue to build their lead in the NFC East. Goedert is returning at the perfect time after being out with an ankle injury for four weeks. With the Eagles other tight end in Zach Ertz still on injured reserve, Goedert will get the main role in a tight end heavy offense. The Eagles are also up against a Giants’ defense that has given up the fifth most receiving yards in the league. A prime matchup and starting role means Goedert has top-10 fantasy tight end value.

Mark Andrews, Baltimore Ravens. The Ravens offense is in deep trouble. Yes, they have been winning games against teams like the Colts last week, but their quarterback Lamar Jackson has begun to struggle. Compared to last season where Jackson was scoring three to four touchdowns a game, he has only averaged 1.5 touchdowns a game this season. This has led Baltimore’s receivers like Andrews to see a drop in production. Andrews, who was also a touchdown machine last season, hasn’t gotten into the endzone since Week 5. The Ravens are up against a weaker secondary in the Patriots this week, but until Baltimore figures out their offense again, managers should steer clear of starting him this week.

Ka’imi Fairbairn, Houston Texans. Despite Houston’s rough start to the season, Fairbairn has had a great start to his season. Last week, Fairbairn made three extra points and two field goals including one 50+ yarder. Houston will be up against a Browns team that has given up the 23rd-most points in the league. As long as the Texans offense continues to sling the ball with great precision, Fairbairn will have plenty of opportunities to have an outstanding performance.

Graham Gano, New York Giants. On the contrary to Houston’s success on the offense, the Giants offense has looked horrendous. The Giants offense ranks 31st in yards per game this season with only 298.2, which is only above the other team from the Empire State in the Jets. This has left Gano to have a very limited amount of opportunities to even have a chance to score. The Giants offense woes will likely continue as they are up against the Eagles defense which held them to just 21 points two weeks prior. Gano is a great kicker, but the fact that he is on an awful Giants offense is enough to seek other options at the kicking position.

Minnesota Vikings Defense. After a rather rough start to the season, the Skol Nation have been able to fix their defense. Over the last two weeks, the Vikings surprised the Lions and Packers offenses by holding them to 22 points or below. This impressive streak will continue against the Bears offense that has the 6th least amount of points scored as well as the worst rushing offense in yards per game in the league. The Vikings are a sneaky waiver wire pick up for fantasy managers who are in search for a defense this week.

San Francisco 49ers defense. What a mess. Last year’s NFC Champions went from being the favorites to win the NFC to being dead last in their division. It has been the curse of their injuries which consists of 15 or more players this week. With all the injuries stacking up, the 49ers season is basically lost especially now that they will be up against a newly-revived Saints offense. The Saints now have Michael Thomas back and in their first game with him against the Buccaneers looked amazing. If anyone even has the 49ers’ defense still, they should either bench them or simply just drop them as this defense has officially lost all of their value.