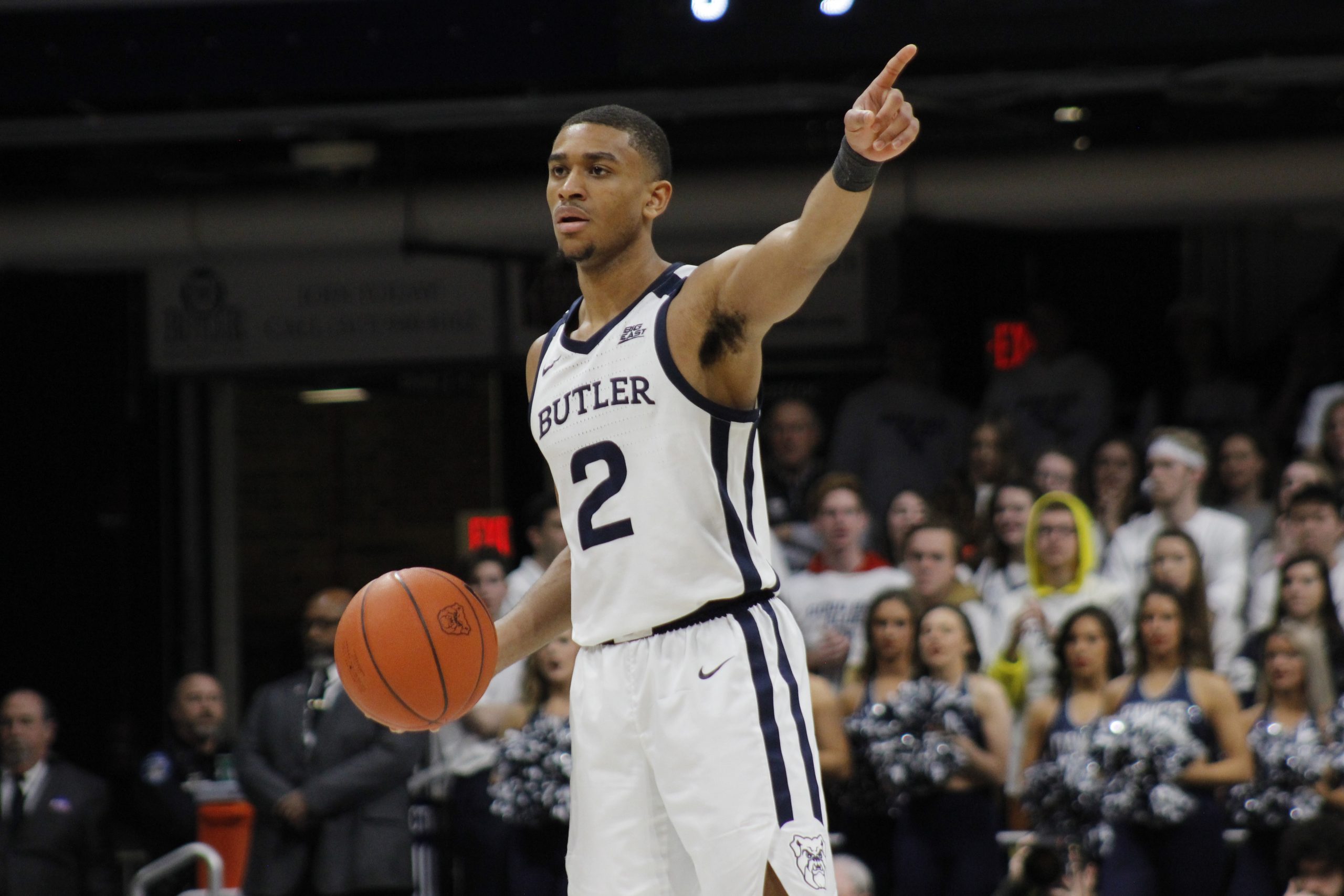 In March, the Butler Bulldogs men’s basketball team was all but confirmed to return to the NCAA Tournament for the 10th time in 13 seasons after a brief hiatus in 2019.

Then, amid growing concerns of the COVID-19 pandemic, the Bulldogs’ quest to compete in the Big East and NCAA Tournament was ended before it even started.

Butler head coach LaVall Jordan led Butler to a 22-9 record in his third season at the helm, finishing fifth in the Big East with a 10-8 mark in conference. The Bulldogs shined in the non-conference slate, winning 12 out of 13 games, while reaching as high as No. 5 in the AP poll, the highest in program history. In the team’s final game on Mar. 7, Butler defeated Xavier behind Kamar Baldwin’s game-winning 3-pointer.

Despite the success of their historic season, Butler underclassmen and coaches couldn’t help but feel disappointed that their senior leaders would not be able to cap off their Butler careers with a trip to the Big Dance.

“It was emotional,” Jordan said. “We had seniors who put in a ton of time and we felt like we had a pretty good group and wanted to do more together.”

Leading candidates to take advantage of playing opportunities in the backcourt include Jair Bolden, Myles Tate and Chuck Harris.

Bolden, a graduate transfer from the University of South Carolina, will likely see ample minutes at shooting guard. Bolden started 15 games for the Gamecocks last season, but said he is looking forward to competing with this team and this program.

“With all the seniors returning and all the guys that were on the team last year that didn’t get to finish the special year that they had, I think everyone is really locked in and we’re mission-focused,” Bolden said. “We’re all locked in on winning games this year.”

Tate, a four-star freshman from Roebuck S.C., is a four-time state champion at Dorman High School in South Carolina. With Baldwin’s graduation and Battle’s transfer, Tate will likely see playing time right away.

Harris — who is also a four-star freshman — should see action as well in his first year away from his hometown of Washington, D.C. Harris averaged 12 points per game as a first team All-State selection.

With the losses of Baldwin, McDermott and Tucker, Butler will look to replace their production from behind the arc. The Bulldogs return just 10 percent of their 3-point field goals from last year’s team as junior big Bryce Golden — who made 11 3-pointers last year — is the leading returner in that statistic. Coach Jordan said he was confident in this group’s ability to fill that production as a collective group.

“I think it’ll be an all-hands-on-deck by-committee approach,” Jordan said. “We’re exploring right now and trying to learn a little bit more about our team everyday.”

Aaron Thompson, who is soon to be a four-year starter at the point guard position, is the frontrunner to be this team’s leader. Last year, Thompson led the team with 4.7 assists — good for fourth in the Big East — despite battling multiple injuries throughout the 2019-20 campaign. Jordan said Thompson’s impact is felt with the way he communicates on the floor.

“When [Thompson] is back in there, you can tell there’s a difference just with his voice in practices,” Jordan said. “You can hear him across the court and if you’re coming to watch us at a practice, you’ll hear him in the stands.”

Golden and redshirt senior Bryce Nze are the team’s two leading returning scorers who will  fill out the front court for the Bulldogs. Golden enjoyed a breakout campaign as a sophomore, starting in all 31 games and shooting over 50 percent from the floor.

“I’m going to do whatever it takes to help lead and help the team get some W’s,” Nze said. “Whatever happens over the course of the season is cool, but I just want to get to the [NCAA] Tournament.”

Jordan shared many of the same sentiments about Nze’s progression as a player and his ability to lead the team this upcoming season.

“[Nze] has really grown his game and developed and is somebody his teammates are looking for, for sure,” Jordan said.

Senior forward Christian David will miss the beginning of the season recovering from an ACL tear he suffered in January’s matchup with Villanova, but figures to get plenty of playing time at small forward upon his return.

David — who hit the game-winning shot in Butler’s New Year’s Eve win versus St. John’s last year —  was cleared for non-contact work on Nov. 18. In the meantime, Jordan said production at the small forward position could come from a variety of players.

“It will probably be a blend,” Jordan said. “We probably won’t do the same thing each and every night out. Whatever makes the most sense depending on the opponent.”

Butler will not play in any exhibition games in this season, opening their regular season at Hinkle Fieldhouse against Western Michigan on Nov. 25 at 6 p.m. The Bulldogs’ non-conference slate will continue with games against Eastern Illinois on Nov. 29, Northern Kentucky on Dec. 6, Kansas State on Dec. 11 and Indiana at Bankers Life Fieldhouse on Dec. 19.

While the Big East hasn’t released the entire conference schedule to accommodate for COVID-19 postponements, Butler does know their first three games in league. Butler will open at home against St. John’s on Dec. 14, travel to Villanova for a game on Dec. 16 and back at Hinkle to host Providence on Dec. 13.

Picked eighth again in the preseason Big East poll, Thompson said the team is familiar with playing better than expectations from outsiders.

“We don’t really take too much stock in it,” Thompson said. “We know we can play with anybody in the country.”