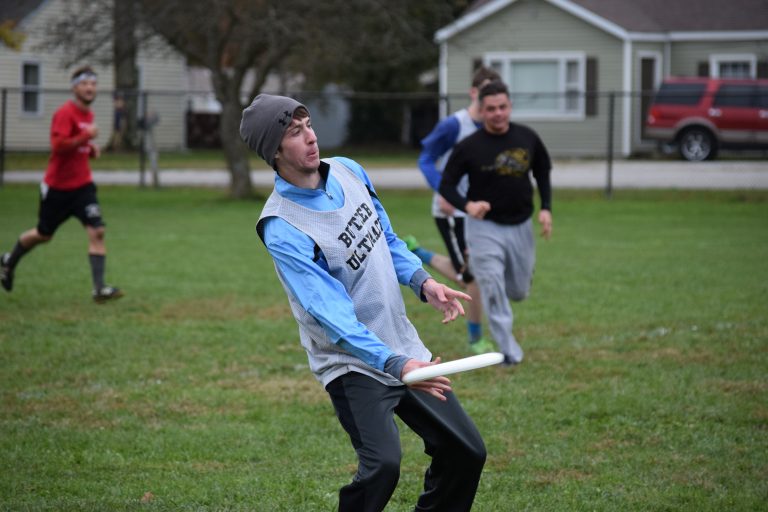 When the Butler Club Ultimate Frisbee team discovered its ability to practice was in jeopardy due to the COVID-19 pandemic, 28-year-old head coach Arthur Small knew just what to do.

So, he hosted a meeting with the four captains of the team in which he created a COVID-19 proof plan. Then, he met with club sports coordinator Bailey Finocchio. Small and Finocchio’s plan was comprehensive yet simple: buy masks for the team, social distance, and for Small, taking all the equipment home to clean it.

Also included in the plan was that a club supervisor would be required at each practice. Before practice, coaches and players would be required to show their daily health screening, and players would have to provide their Butler ID for contract-tracing purposes. Their plan was approved by the university, and after it went into effect, it inspired other Butler club sports’ COVID-19 plans.

Small credits his familiarity with the subject for the team’s ability to create and execute a plan in a manner that makes everyone comfortable. Currently, the team is practicing three days a week at the intramural fields. Practices usually include working on fundamentals and scrimmaging.

With COVID-19 cutting off social connection, the ultimate frisbee team has provided a respite for many of its players.

Sophomore cutter Vaughn Ernst is a first-year player that did not initially see himself in club ultimate frisbee. Going into his second year at Butler, Ernst was most interested in playing for club soccer, but quickly realized that it would not be active this semester.

“It’s given me something to do, something to look forward to and something to get me out of my room and maybe associate with some people that I wouldn’t normally hang out with,” Ernst said. “It’s always nice to not only improve yourself, but improve relationships and meet new people.”

Returning sophomore handler Caiden Lukan also encouraged Ernst to join the team. Lukan said he was appreciative that Butler was allowing them to practice in a safe environment. Not only does it allow the students to get out and take a break from class, Lakan said, it also serves as an advantage in the future.

If all goes to plan, the team is rallying around one main goal — to make it to a national championship. Two years ago, only one game separated them from nationals, and at the time they had less than 10 players. Now, with a roster double that amount, the team has its fingers crossed for an opportunity.

If the rumor of a spring postseason comes true, the team believes its ability to practice while others aren’t will give them an upper hand.

“Us being able to practice, critique stuff, work on stuff, fix things, improve — it’s definitely a big advantage over the other teams, so we’re setting the bar high,” Ernst said.

The COVID-19 pandemic, of course, does provide some obstacles for the team.

These new rules and guidelines do provide some challenges in terms of what the team is able to do. Returning sophomore handler Caiden Lukan acknowledged there have been some differences in how practice is run this year, but is thankful to be on the field.

“A lot of the time we are playing zone defense, which doesn’t allow us to work on some of our other offensive sets because they’re dependent on man defense,” Lukan said. “But I’m just grateful that we’re able to practice.”

Small knew that in-person practice and team building was crucial to the club, as it was just recently sanctioned by the university in 2017.

The passion for success within the club ultimate team is undeniable but for Small and his players, being part of this group means more.

“I know that the players on the team and the team itself is hopeful and we are preparing ourselves like we’re going to be able to play for a chance to go to nationals for the first time in program history,” Small said. “That’s really what we set our sights on this year.”

To Small, being a coach is about being a mentor to a group of guys that may need guidance at times. Small accredited one of his former ultimate frisbee coaches for much that he has become today, and wants to do the same with his players.

“Being a college ultimate coach is a lot more than just teaching kids how to throw a Frisbee,” Small said. “You really do become kind of a father figure and a mentor, and you get to help a lot of kids who have a good head on their shoulders, but maybe have some questions about the next steps in life.”