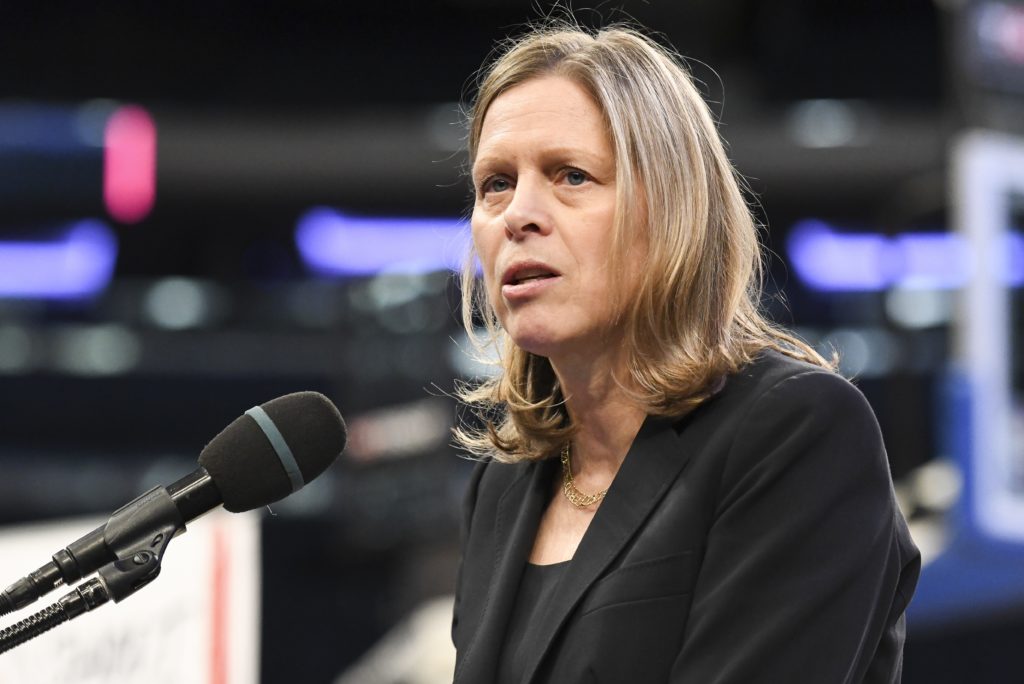 Val Ackerman makes an announcement at a Big East press conference last year. The Big East is scheduled to resume conference play in mid-December. Photo courtesy of The Athletic.

When the Big East Tournament was cancelled at halftime of a quarterfinal game between Creighton and St. John’s, few people knew when or how one of the country’s premier conferences would return to the basketball court.

The Big East Media Day — held virtually on Oct. 28-29 — provided fans more closure on how the conference would resume its operations while following health and safety protocols as a result of the COVID-19 pandemic.

Here are the biggest takeaways.

Butler men’s basketball announced their two opening games of the 2020-’21 season. The Bulldogs will host Western Michigan to open the season on Wednesday, Nov. 25. Then, Butler will welcome the Eastern Illinois Panthers to Hinkle Fieldhouse on Sunday, Nov. 29.

Game times and television broadcast assignments will be announced at a later date.

Butler Basketball is back

Butler men’s and women’s basketball will return to Big East play in December of 2020, over nine months since either last team last stepped on the court. As of now, these games are scheduled to be both teams’ firsts of the season, as neither has released a non-conference slate for 2020.

This year’s Butler men’s basketball team — which head coach LaVall Jordan frequently referred to as “Team 123” in reference to Butler’s 123rd men’s basketball season — will play three games this December, following the Big East announcement of the schedule, which includes 23 total conference games. The Bulldogs will face off with St. John’s on Dec. 14, Villanova on Dec. 16 and finally, Providence on Dec. 23. For the Bulldogs, playing in the Big East is a “really tall mountain to climb” Jordan said, but one his team looks forward to mounting.

Jordan noted senior forward Christian David, who suffered a torn ACL early last year, will not be available for the first game of the season, but he is slowly progressing.

“I wouldn’t say [David] is ahead of schedule, but he is definitely on-schedule,” Jordan said.

Butler women’s basketball will play four games this December, following the Big East announcement of the schedule, which includes 22 total conference games. The Bulldogs will face off with Seton Hall on Dec. 4, Providence on Dec. 6, Connecticut on Dec. 15 and Creighton on Dec. 19. When asked if Butler’s women’s basketball thrives with low expectations, Butler head coach Kurt Godlevske cracked a smile.

“I don’t think they like it,” Godlevske said. “Nobody likes being picked seventh, eighth or last, especially when you know you have talent. We like the fact that people are overlooking us and judge us by the body of our work, that’s our motto. And in the last two years, we’ve had chances to really compete for championships. And we anticipate and plan on being right there in the mix [this year].”

Godlevske said Oumou Toure, who averaged 8.6 points per game and 6.1 rebounds and 2.4 steals as a freshman last year on her way to Big East Freshman of the Year, freshman Annilia Dawn and senior Upe Atosu will be crucial to Butler’s success.

“There’s a unique blend of young and old… I’m really pleased so far with our leaders,” Jordan said.

Big East Basketball is Back

Val Ackerman, the commissioner of the Big East conference, was excited to announce the conference’s return but emphasized the short-term look the conference is holding out for scheduling.

“Everybody’s expectation is that there may be — and perhaps will be — disruption during the year and that games, however thoughtfully laid-out, may end up getting postponed, best-case, worst-case, canceled,” Ackerman said. “We want to do our best in doing that, all the while making sure we are safe. The paramount concern is that we maintain the health of our students and coaches and all of their staff.”

While Ackerman admitted the difference between professional and collegiate sports, the NBA bubble and the WNBA bubble — both of which took place in Florida — offer a model for Big East’s own “bubbleville,” as Ackerman dubbed it.

On Aug. 27, the Big East Conference announced it will host its next three women’s basketball championship tournaments at Mohegan Sun Arena in Connecticut from 2021 through 2023. As the COVID-19 pandemic spreads throughout the country, this single-venue format offers short-term promise for the Big East. The Mohegan Sun Arena hosted the Bellator MMA Tournament throughout the summer, which lasted for 6 months. Moving forward, the Big East will keep a close eye on the upcoming WNBA season and the New England Black Wolves, a professional lacrosse team that also play in the Mohegan Sun Arena, Amber Cox, VP of Connecticut Sun & New England Black Wolves, said.

“No one knows where the virus will go, but scenarios will help,” Cox said.

According to current CDC guidance, if a person is exposed to COVID-19, each player must quarantine for 14 days. Looking towards the NCAA medical task force — primarily Dr. Dina Casero, team physician for UCONN — the Big East has tried to shorten the quarantine length from 14 days to 10. But it is ultimately not up to them, Ackerman said. Instead, local public health authorities wield jurisdiction on the issue. For example, as a result of first-hand COVID-19 exposure, the Marquette men’s and women’s basketball teams are currently amidst a 14-day quarantine, under direction from the city of Milwaukee health department.

Next Steps in Social Justice Initiatives

This initiative, which landed on the date of Juneteenth, is “a department-wide initiative focused on empathy, education, and experience, which stands for ‘Building Unity Through Leadership, Education and Respect,’” according to Butler Athletics.

The first step of the initiative was “active listening and dialogue,” Butler Athletics wrote, which included a BUnited Crucial Conversation on Aug. 20, 2020, with several members of Butler’s men’s basketball team participating in an hour-long sit-down that saw them share their thoughts on social injustice and race. Now, Jordan said he wants to continue Butler men’s basketball to continue that conversation.

“We’ve got a pandemic we’re living in, we’ve got a social pandemic that we’ve been in for a long time… Our players have been really engaged in trying to use their platforms and their voices. And this BUnited gives them a vehicle to improve that.”

The second step of the initiative seems to be action. Jordan particularly pointed to Golden, who he said was “really passionate about a reading program for youth, along the lines of equality.” Ackerman also announced the establishment of the John Thompson Jr. Award, which honors the late Thompson, who served as Georgetown men’s basketball coach for nearly three decades. Thompson served as a father figure and mentor to numerous future NBA stars like Allen Iverson, Alonzo Mourning and Patrick Ewing.

The award will recognize a “Big East Athletics department, team or individual who has demonstrated outstanding leadership, perseverance and/or creativity in promoting an environment of inclusiveness or championing the end of discrimination, racism and bigotry.”

As the COVID-19 pandemic rages on, Jordan said “knock on wood and pray hard that we have an uninterrupted season.”