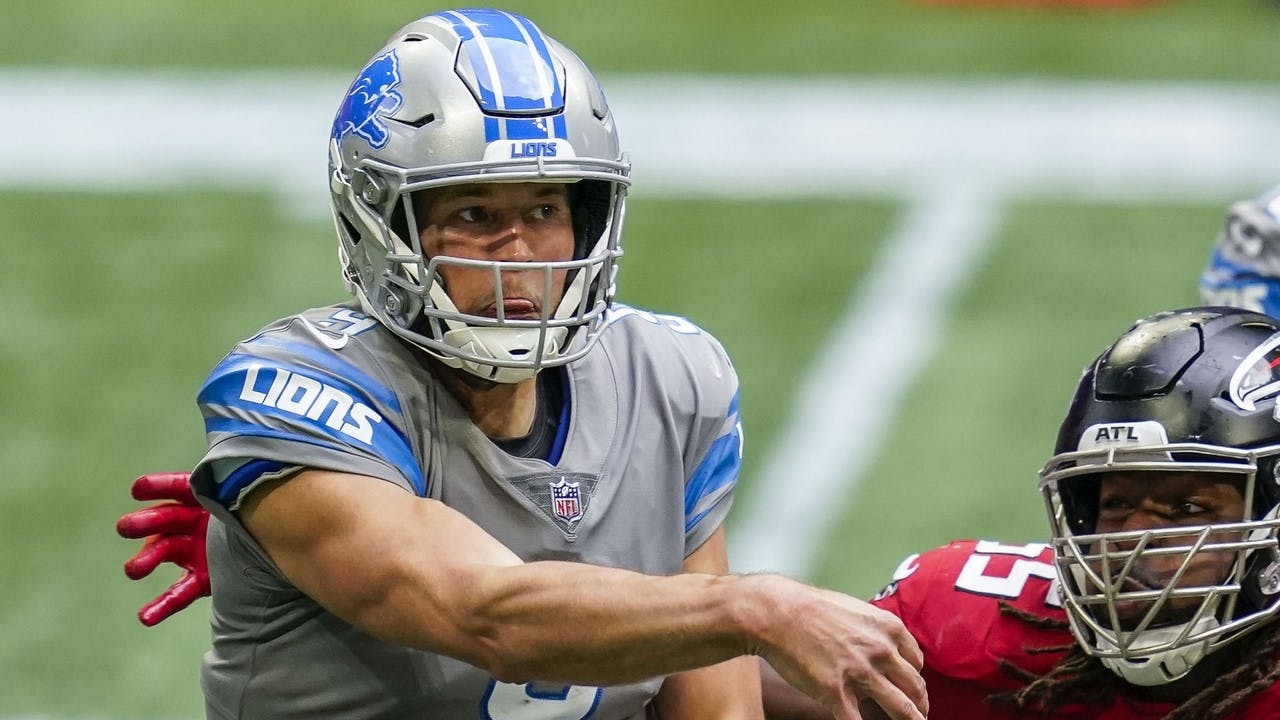 Matthew Stafford throws a pass in the Lions’ comeback victory over the Atlanta Falcons last week. Stafford and the Lions turn to a stout Indianapolis Colts’ defense in Week 8.

It’s midway through the NFL season and teams are forming their identities for the 2020 season and patterns are beginning to show. There is only one team left undefeated — the Pittsburgh Steelers as well as one team left winless — the New York Jets. This means that it should be easier for fantasy managers to find the players to start each week, right?

Wrong, the injuries have continued to mount with the latest player hit by the injury hammer was Odell Beckham Jr. after he suffered a torn ACL. It is players like Beckham who have forced fantasy managers to scramble to find emergency replacements to keep their fantasy hopes alive.

Here are the key players to start and sit for Week 8.

Teddy Bridgewater, Carolina Panthers. The Panthers have been on a roller coaster of a season. They started slow and then took off upsetting the Cardinals and the Falcons, but then their hot streak came to a screeching halt after losing the next two games to the Bears and Saints. Even with all the ups and downs, the Panthers’ passing offense has looked better than expected. Bridgewater is ranked fifth in the league in passing yards, and Robby Anderson is second in the league in receiving yards. With Christian McCaffery out again this week, expect Bridgewater to account for more of the offensive production. Since the Panthers are up against the Falcons, who have given up the second most passing yards in the league, it would be a smart idea to move Bridgewater into the starting lineup.

Matthew Stafford, Detroit Lions. It sounds weird saying this, but the Lions might actually be good this season. 2020 has thrown oddities at us all year, but the Lions playing well is only adding to it. Stafford and the Lions offense has been clicking as the return of Kenny Golladay and emergence of D’Andre Swift have proved to work out. The only problem about all this new hype surrounding the team is that they have not beaten a “real” team yet. They will be put to that test this week as they play against the second-best defense in the league in the Colts. Even though the Lions have been hot, this week’s matchup is enough to scare anyone out of taking him off the bench.

Devin Singletary, Buffalo Bills. After dropping their last two games against the Chiefs and Titans, the Bills got an early Christmas present wrapped in green and white from the Jets. In the present was another win to add to the Bills record this season. On a real note though, the Bills were able to bounce back after not punting the ball at all the whole game, but also not scoring a single touchdown. The lack of touchdowns from last week will change now that they are up against the Patriots defense that has begun to struggle lately. Last week the 49ers’ third-string running back accumulated 112 yards and three touchdowns. Zach Moss may be healthy again, but Singletary still holds the starting role until proven otherwise. Singletary needs to be moved into the starting lineup immediately.

Myles Gaskin, Miami Dolphins. For the first time since 2016, the Dolphins finally have a reliable fantasy football running back in Gaskin. Offensive coordinator Chad Gailey has found his favorite piece in his offense and has been feeding him at least 14 times per game. Gaskin and the Dolphins are hot and coming off a bye, but there is a wall standing in their way this week and that is the Los Angeles Rams defense. Last week, the Rams held the Bears to just 49 rushing yards all game. Gaskin is slowly becoming a star on this Dolphins team, but for this week, he should stay on the bench.

Sterling Shepard, New York Giants. The Giants are back… kind of. The Giants offense has been a mess ever since Saquan Barkley tore his ACL and Daniel Jones continues to be a turnover machine. However, there might be a glimmer of hope with the return of Shepard this week. Shepard had been out for four weeks with a toe injury until last week when he came back and led the team in receptions and receiving yards. He has looked very healthy in his return and will look to continue against a Buccaneers team that has already given up 225.3 receiving yards per game. With Shepard’s role continuing to increase and the great matchup could be a solid option for this week.

Tim Patrick, Denver Broncos. Since Courtland Sutton went down with an injury in Week 2, Patrick has become quarterback Drew Lock’s favorite target. Patrick stole this job from first round draft pick Jerry Jeudy who was thought to be their better replacement. In the last four games, Patrick has 301 receiving yards and 2 touchdowns and is only getting better each week. Only problem is Patrick has a tough matchup against the Chargers defense this week who held each of the Jags players to three receptions or less last week. Those who picked up Patrick in the last two weeks off the waivers should know that there are plenty of other wide receivers out there with better matchups than him.

Harrison Bryant, Cleveland Browns. The Browns were limited on tight ends last week with Austin Hooper out with an appendix injury and David Njoku not producing great numbers, so they turned to their 22-year-old third-string tight end. With this starting role, Bryant did not disappoint after he caught four passes for 56 yards and two touchdowns against the Bengals. Bryant was a major surprise and has already seemed to have great chemistry with Baker Mayfield who is now looking for a new number one target after Odell Beckham went down with an torn ACL. This week’s matchup is against the Raiders who have given up the 7th-most yards per game in the league. Bryant’s new role and great matchup should allow him to produce a similar stat line in Week 8.

Kyle Rudolph, Minnesota Vikings. Talk about a major disappointment. The Vikings have looked downright awful this season. In what was supposed to be another the great year for the Vikings has taken a 180 degree turn for the worst. The injuries, weakened defense and struggling offense has led the Vikings to an abysmal 1-5 record. As for Rudolph, he hasn’t been great either as he hasn’t surpassed double digit fantasy points at all this season. The Vikings may have just had their bye week last week, but they get to return against a red-hot Packers defense. Rudolph is just not putting up the numbers to cut it for any fantasy manager.

Jake Elliot, Philadelphia Eagles. The Eagles are part of a historic division in the NFC East this year, but not in a good way. For the first time in NFL history, a team is leading the division with two wins after seven weeks, and that team is the Eagles. The Eagles may be ahead in their division, but they have looked horrific in every position except for this offense. Recently, the Eagles offense has been able to score significant amounts of points against great defenses like the Ravens and Giants. This means that Elliot is getting more and more involved in the offense especially with this week’s matchup against the Cowboys defense who haven given up a league-leading 243 points through seven games. Elliot is a solid option for fantasy managers looking for a replacement for a kicker on a bye this week.

Chris Boswell, Pittsburgh Steelers. It has been seven weeks and the Steelers are the only undefeated team left. Their strong defense and revived offense has looked spectacular each and every game. With such an outstanding team, some would believe Boswell has been one of the best kickers in fantasy football. To the surprise of some, he actually hasn’t done that well. Boswell has failed to reach 10 or more points in any of the weeks he was kicking. This will likely continue as he is up against the Ravens defense who have given up the least amount of points all year with only 104 total points. Boswell is hard to trust especially with this week’s tough matchup.

Kansas City Chiefs Defense. The Chiefs defense may only have a few big names on their team like Tyrann Matheiu and Chris Jones, but their defense has been amazing. Last week, the defense scored 24 points in fantasy football with four turnovers forced and a pick six against the Broncos. This week they are up against the worst offense in the league in the Jets who have scored a league worst 85 total points this season. The Chiefs offense is destined for another field day as long as Adam Gase is still the head coach of the Jets.

New England Patriots Defense. In all of the Tom Brady era, the Patriots have never started off 2-4. Now, in the first year without him, they have done exactly that. The Patriots and their defense has looked far worse than what they had last year. They have struggled against the pass, failed to create turnovers and can’t stop the run for their lives. The Patriots have even been rumored to be attempting to trade last year’s defensive player of the year in Stephon Gilmore. The Patriots have become a disaster and will only get worse against Josh Allen and the Bills’ offense this week ready to get revenge for all their previous defeats. Sit or even get rid of the Patriots defense until Bill Belichick is able to figure out what is really wrong with his team.