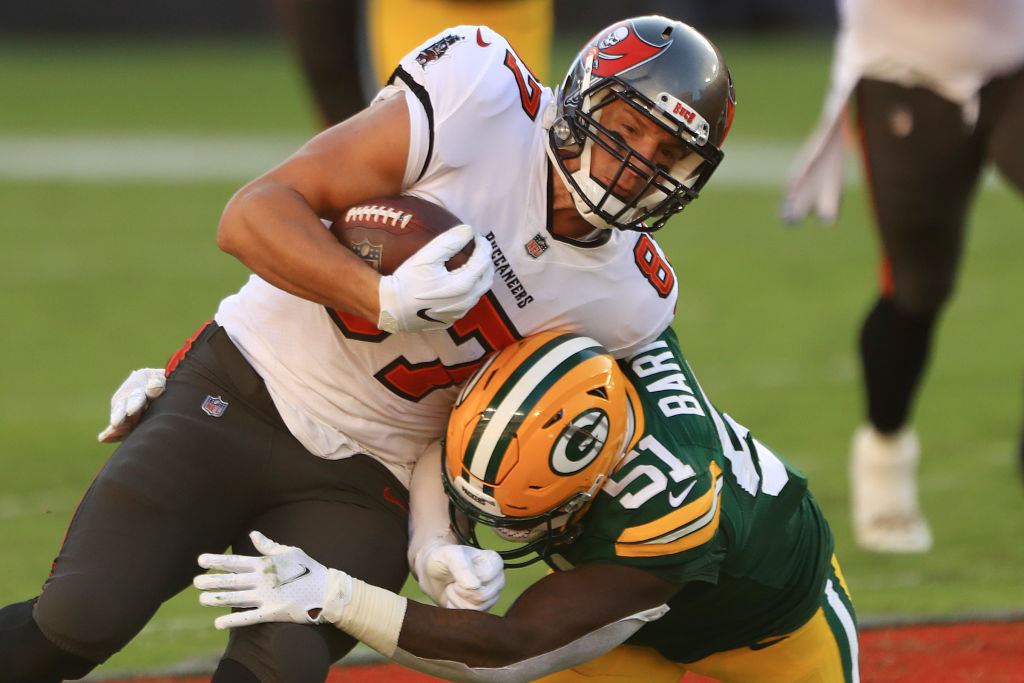 Rob Gronkowski scores his first touchdown as a member of the Tampa Bay Buccaneers. If his connection with Tom Brady is rekindled from their days in New England, Ethan Polak says Gronk is a must-start in fantasy. Photo by Pro Football Talk.

The halfway mark for most fantasy football leagues is just around the corner as fantasy managers begin to look more into the future to get ready for the playoffs. It is beginning to get easier to recognize which NFL teams are the real deal and which teams are imposters. Even the COVID-19 outbreaks and scheduling fiascos have begun to slow down as players and staff have found new ways to stay healthy.

With all these new factors in the NFL, setting lineups for this week should be a little easier for fantasy players as the playoffs begin to creep closer and closer. Here are the key players to start and sit for Week 7 of the NFL season.

Justin Herbert, Los Angeles Chargers. The Oregon product has certainly lived up to expectations throughout the first few weeks of the season. After Tyrod Taylor went down with a chest injury in Week 2, Herbert stepped into the starting role very well. In his last game against the Saints, whose defense has allowed the 8th fewest yards per game, Herbert threw for 262 passing yards, four touchdowns and zero interceptions. This week, the Chargers are greeted by the Jaguars who have given up the 5th-most yards in the league. Herbert’s favorable matchup means he is a solid start against the struggling Jaguars defense.

Ryan Tannehill, Tennessee Titans. Tannehill is surprising football fans each and every week as he continues to lead his Titans to an undefeated record after beating the Texans in overtime last week. In that game, Tannehill had himself a day throwing for 364 yards and four touchdowns. However, the Titans will be put to their hardest test yet this week as they are up against the Steelers and their No. 1 ranked defense in passing yards, rushing yards and points allowed this season. In the previous week, the undefeated Steelers defense held a red-hot Browns team to just seven points. Even though Tannehill has proved himself to be one of the best fantasy quarterbacks this season, the new “Steel Curtain” has looked unstoppable meaning Tannehill should stay on the bench.

D’Andre Swift, Detroit Lions. The 21-year-old rookie running back is proving his case on why he is the best guy in the Lions backfield. Many weeks have gone by and fellow running back Adrian Peterson and Swift have split carries almost down the middle each week, but there has always been one clear leader in rushing — Swift. Last week, Peterson received one more carry than Swift, but it was Swift who ran for more rushing yards with his 116 rushing yards and two touchdowns outweighing Peterson’s 40 yards and one touchdown. It is up to head coach Matt Patricia to make the call on who gets more touches against a Falcons defense that has allowed the second-most yards per game in the league. After an outstanding performance like what Swift had, it is likely he will receive the head back duties. Fantasy managers should make sure to have Swift in their lineups for this week.

Darrell Henderson, Los Angeles Rams. For whatever reason, the Rams decided to take a week off against a 49ers team that looked awful the week prior. After going 4-1 to start the season, the Rams could only put up 16 points against a banged-up 49ers defense. There was one bright spot on the team that game and his name was Darrell Henderson. He rushed for 88 yards on only 14 carries throughout the game. Henderson looks to have carved himself as the main role in the Rams’ backfield. Only problem with his success is that it will likely take a dip against the Bears’ defense on Monday night. The Monsters of the Midway are back in action as they have given up the 7th-least yards allowed per game. Henderson may have a bright future in the Rams offense, but for this week’s matchup, leave him on the bench.

Odell Beckham Jr., Cleveland Browns. The Browns hype train fell off the rails last week against the Steelers when they were only able to put up seven points all game. Baker Mayfield looked horrendous after throwing two interceptions and eventually being benched in the third quarter for Case Keenum. Lucky for Browns fans, they have an easy opportunity to bounce back this week against the Bengals. In Week 2 when these teams last faced off, the Browns played very well with Beckham going for 74 receiving yards and a touchdown in a Browns’ win. Beckham may have had a rough last week, but this week’s matchup is too good to pass up on.

Will Fuller V., Houston Texans. Bill O’ Brien was finally let go from the Texans and they are all of a sudden good? The Texans came into last week’s game fired up against the undefeated Titans. They were able to force overtime where their defense couldn’t stop Derrick Henry if their life depended on it. Props to them for keeping it close, but unfortunately, their difficult schedule is only getting harder this week against the Packers. The Packers may have just let up 38 points against the Buccaneers, but star cornerback Jaire Alexander held Mike Evans to just one catch for ten yards all game. Alexander this week is covering Fuller and will make Deshaun Watson think twice when targeting him. Fuller may have created fantasy value for himself recently, but this week, he should remain out of the starting lineups.

Rob Gronkowski, Tampa Bay Buccaneers. The NFL must beware because Gronk is back. Last week, the vintage Tom Brady and Gronk connection from New England was restored. Gronk caught five passes for 63 yards and a touchdown against a Packer defense that is ranked 13th in yards allowed against opposing tight ends. With O.J. Howard on injured reserve and Cameron Brate not being a factor in the offense, Gronk has worked his way back into a starting role. The Buccaneers may be up against the Raiders defense that has allowed the 9th-least yards to opposing tight ends, but as long as the Brady to Gronk connection is back in business, Gronk is a must-start each and every week.

Greg Olson, Seattle Seahawks. The Seahawks are one of the three remaining undefeated teams that are still alive that is due in part to Russell Wilson and their offense. They have generated the second most points in the league with 169 points. As for Olsen, his stats have been like a roller coaster. He played well against the Dolphins where he was targeted seven times, but in the week after that he only caught one pass all game. With Olsen’s inconsistency and the new addition of Will Dissly back into the lineup, Olsen is a must-sit for this week.

Younghoe Koo, Atlanta Falcons. Ladies and gentlemen, the Falcons are no longer winless. The Falcons were able to pull off a respectable win against the Vikings where Koo went 4-for-4 from the field range and four extra point attempts. Koo has been lights out for the Falcons ever since the game against the Packers in Week 5 where he didn’t make a single field goal. This week, Koo and the Falcons are up against a Lions defense that gives up 28.6 points per game. If the Falcons offense can stay hot against a weaker Lions defense, don’t be surprised if Koo has another busy day.

Robbie Gould, San Francisco 49ers. Gould and the 49ers look like a legit team again. After giving up 43 points to the Dolphins the 49ers responded by upsetting the Rams at home 24-16. In this game, Gould made his only field goal along with three extra points made. However, this week, the 49ers will get a rude awakening as they are up against a Patriots defense that hasn’t let up a touchdown in two weeks. The Patriots-49ers game is looking like another low scoring game meaning Gould is a must-sit for this week.

Buffalo Bills Defense. The Bill have come crashing back down to Earth after starting 4-0 and then dropping the next two games. Lucky for the Bills, they will be on a bye this week… against the Jets. The Jets have been a dumpster fire this season and are the only team left without a win. If the Jets can’t even score a single point against the Dolphins, then one can only imagine what will happen when they go up against Buffalo. The Bills defense has been a little rocky, but this week they should be able to redeem themselves in an extremely easy matchup against the Jets.

Carolina Panthers Defense. The Panthers have looked surprisingly alright without Christian McCaffery. They have been able to hold the Cardinals and Falcons high-scoring offenses to under 20 points, but only hold a record of 3-3. Unfortunately, the Panthers are up against a Saints team coming off a bye along with the return of star wide receiver Michael Thomas. Although the Panthers have looked better than expected, this week they are a risky start against another high-powered offense in the Saints with an increased amount of rest.