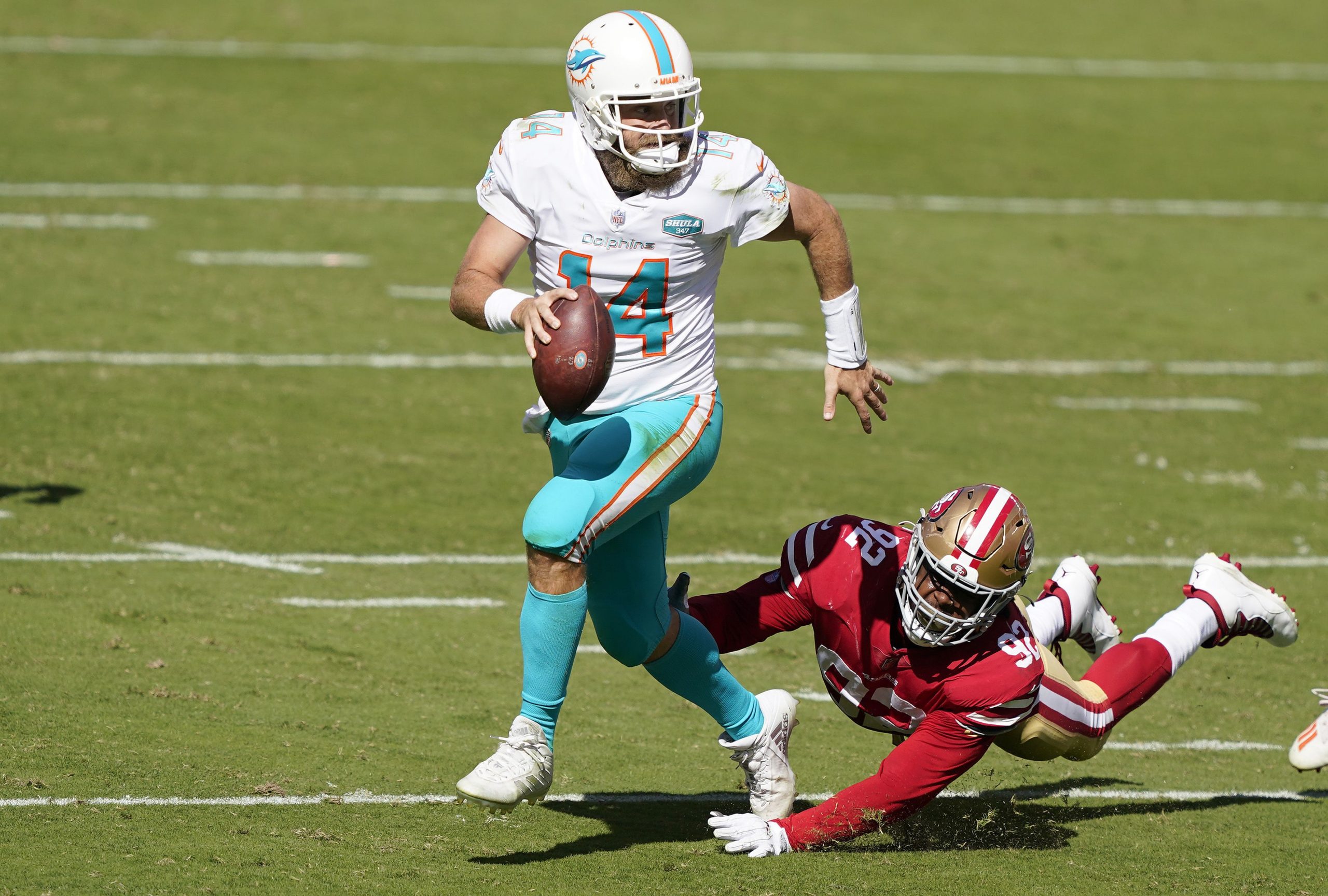 Ryan Fitzpatrick runs from a 49er defender in the Dolphins’ 43-17 victory last week. With a favorable matchup with the New York Jets this week, Ethan Polak suggests Fitzmagic should stay in fantasy starting lineups this week. Photo by Yahoo! Sports.

While some players who tested positive for COVID-19 are slowly beginning to return back into lineups, the rest of the NFL is still feeling the effects from the time missed. After the Patriots-Broncos game got postponed and the Titans-Bills game turned into the first Tuesday Night football game since the Eagles and Vikings did it in 2010, the NFL schedule for many teams is shuffled around.

The change now causes fantasy football players to adapt even more as games between teams became better or worse depending on the matchup. With this new hardship added into this wild season, new key players have emerged from the depths of the fantasy football waivers. Here are the players to start and sit for Week 6 of the NFL season.

Ryan Fitzpatrick, Miami Dolphins. In one of the most surprising blowouts this season so far, Fitzpatrick and the Dolphins clobbered the 49ers in San Francisco, 43-17, which was not close for long. After his starting job was put into question, Fitzpatrick turned into “Fitzmagic”, throwing for 350 yards and three touchdowns. This week, the Dolphins are up against an 0-5 Jets team that is headed in the complete opposite direction. The Jets are tied for the 2nd most points given up through five weeks in the entire league. The Dolphins haven’t lost to the Jets at home since 2015, so look for Fitzptraick to have another magical day.

Carson Wentz, Philadelphia Eagles. Wentz is running out of time to prove why he should continue to be the starting quarterback for the Eagles. Since the start of the season, he has gone out and thrown a league leading nine interceptions. Some could argue that it is because of his weak offensive line and wide receivers, but when they struggle, so does Wentz. His starting job is now on the hot seat, and it will only get hotter as he will have to go up against a Ravens defense that has allowed the 6th-least yards per game along with the 2nd-most forced turnovers in the league. If Wentz is somehow still on anyone’s fantasy team, he should at the very least be kept on the bench for this week.

Alexander Mattison, Minnesota Vikings. At first glance, seeing Minnesota’s backup running back’s name is probably a major surprise, but when Dalvin Cook goes down with a groin injury that will likely keep him out for this week’s matchup against the Falcons, the hype train for Mattison starts now. Before Cook’s injury, he led the league with 489 rushing yards and seven touchdowns. Since the Vikings are such a rush heavy offense and Mattison has a similar play style to Cook, Mattison is lining up to have a day against a Falcons defense that has given up the 2nd-most yards in the league. Make sure Mattison is starting in every lineup available.

Ronald Jones, Tampa Bay Buccaneers. While Leonard Fournette has been out with an ankle injury, Jones has begun to see success within the Bucs’ offense. In the last two games, Jones has surpassed the 100-yard mark against two teams with above-average defense fronts. However, with the return of Fournette this week, Jones is going to see a drop in rushing attempts as well as a harder matchup against the Packers defensive front that has held opposing teams to just 100.5 rushing yards per game. Between the return of Fournette and a harsh Packers matchup, Jones is a sit for this week.

A.J. Brown, Tennessee Titans. After a knee injury in Week 1, Brown made a spectacular return against the Bills. Brown caught seven passes for 82 yards and a touchdown. Despite only meeting twice in the last two weeks and missing eight players to testing positive for COVID, the Titans were still able to embarrass the Bills. Next week’s matchup for Brown and the Titans is a 1-4 Texans team that has been extremely weak giving up 1,937 yards through the first five weeks. If the Titans can do that well on such short rest while missing many key players, Brown should have an even better game this week. Brown needs to be moved into the starting lineup immediately.

Tyler Boyd, Cincinnati Bengals. The Bengals went from finally getting their first win of the season against the Jaguars to not scoring a single touchdown all game against the Ravens. The Ravens defense is stacked, but only putting up three points the entire game is a little embarrassing. Sadly, the schedule for Boyd and the Bengals does not get any easier as they now are up against the Colts’ defense that ranks number one in least total yards allowed per game in the league. While Boyd has remained the Bengals most reliable target on offense all season long, another tough matchup in the Colts’ defense is enough to scare any fantasy owner from starting him this week.

T.J. Hockenson, Detroit Lions. Hockenson may have had a rough start to the season, but this week, all of that is going to change. The Lions have finally got a reasonable matchup against the Jaguars defense who have given up 416.8 yards per game, which is 3rd most in the league. Hockenson is a reasonable waiver wire pickup this week for any fantasy owner in search of a tight end to start.

Austin Hooper, Cleveland Browns. Another tight end who has struggled through the first five games is Hooper. Hooper has only surpassed 50 receiving yards once this season despite being targeted 5.4 times per game. Even with all the targets that Hooper has been racking up, he will likely have another rough game against the Steelers, who give up the 8th-least receiving yards to tight ends. Hooper is not headed in the right direction for this week, so he needs to stay on the bench.

Rodrigo Blakenship, Indianapolis Colts. The goggles are the new trend as Blankenship has been lights out for the Colts so far this season. Blankenship leads the league in made field goals with 15 including 11 for 11 on extra points. Blankenship’s stellar start to the season will likely continue against the Bengals who rank 26th in points allowed to kickers. The 23-year-old kicker is a must start against this weaker Bengals’ defense.

Bradon McManus, Denver Broncos. McManus has had a slow start to his season, but since then, he has been getting better each week with his most recent performance of two 50+ field goals and four extra points made against the Jets. This week, McManus will have to travel to Gillete Stadium to face the Patriots who have given up the 6th-least points to opposing teams. McManus has hope in the future now that Drew Lock is back, but for now he should stay on the bench.

Washington Football Team’s Defense. The NFC East may be hard to watch, but for any fantasy manager in search of a defense for this week, Washington has them covered. Last time Washington went up against an opponent in the NFC East in the Eagles, they had eight sacks and three turnovers. This week, Washington gets to face another favorable matchup in the New York Giants who have only had 282.4 total yards of offense per game. Washington is a major sleeper for those who are in need of a defense.

49ers Defense. Talk about embarrassing. Giving up 43 points to a Dolphins offense at home is not a good look for the former NFC champs. Yes, the offense could not get anything going all game, but 43 points is a lot of points to give up in a game. As the 49ers try to recover after such a loss, they will have to brace for another tough matchup against a Rams offense averaging the 4th-most total yards per game in the league. With another tough matchup for the 49ers defense, it is easy to bench them for this week.