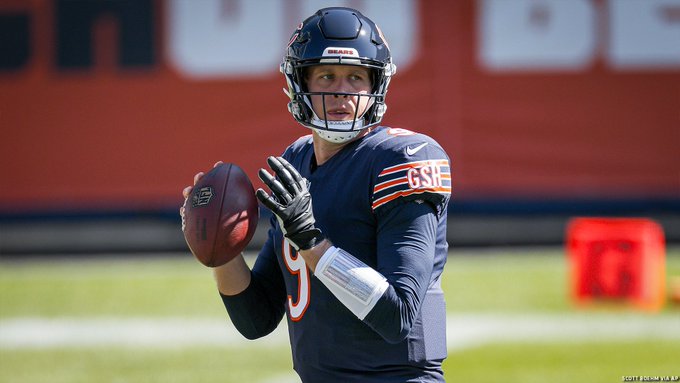 Nick Foles warms up before a game this season. Foles has been named the starter over Mitchell Trubisky in Chicago, but our Ethan Polak advises to sit the Bears QB this week. Photo courtesy of thesource.com.

Another week, another Sunday filled with even more injuries. Even though the players were far worse last week, there is a new concern popping up after three Tennessee Titans players tested positive for COVID-19. With players continuing to get banged up on the field and now players getting sick off the field, fantasy managers are going to have an even tougher time finding players to fill the voids in their lineups.

This means that there are even more opportunities for players who wouldn’t normally be starting. The waiver wires have become deeper, but there is still plenty of talent to pick up for this upcoming week. Here are the key players to start and sit for Week 4.

Jared Goff, Los Angeles Rams. The Rams almost secured the comeback of the season against the Bills last week when they came back from a 28-3 deficit to briefly take the lead, 32-28. However, Josh Allen and the Bills drove down and scored the game-winning touchdown. Even though the Rams lost, Goff had a better game than expected throwing for 321 yards and two touchdowns. These stats will most likely see an increase as they go up against a banged up New York Giants defense that just let a 49ers offense led by backup quarterback Nick Mullens and third-string running back Jerrick McKinnon score 36 points. Goff is going to have a field day against the Giants and should be a start in every fantasy league.

Nick Foles, Chicago Bears. It has only taken two games for the Mitchell Trubisky era in Chicago to come to an end despite the Bears staying undefeated through the first three games. Now, it is time for Nick Foles to do his magic in Chicago… or so he thinks. The Colts have held opposing quarterbacks to under 200 passing yards every game of the season so far. As many fans begin hopping on the Foles bandwagon, the smarter idea would be to hold off from Foles until proven otherwise.

Melvin Gordon, Denver Broncos. In a Thursday night game between the Denver Broncos the New York Jets, some could argue that this game will be hard to watch. However, from a fantasy football perspective, having a player like Gordon against a weak defense could mean he will have a big game. The Jets have allowed opposing teams to run for 400 rushing yards and four touchdowns through three games. Philip Lindsay, the other running back for the Broncos, may make a return after a three-week absence with turf toe, but his snaps will be limited. This means that Gordon is the clear starter who will be getting the bulk of the touches. Make sure to keep Gordon in the lineups this week.

Antonio Gibson, Washington Football Team. Gibson has slowly begun to carve himself a starting role in Washington’s backfield. Last week against the Browns, Gibson led the team in carries, but was only able to rush for 49 yards and a touchdown. This minimal amount of rushing yards is likely to continue as he is up against the Ravens who have only let up one rushing touchdown through the first three games. For the fantasy owners who have him, continue to hold on to him as Gibson is destined to become a star, just not this week.

DeVante Parker, Miami Dolphins. The Dolphins are finally in the winning column as Ryan Fitzpatrick proved his beard is better than Gardner Minshew’s mustache. It also helped that Parker was finally back in the lineup and healthy for the entire game as he led the team in receiving yards with 69 yards on five receptions. With Parker now healthy, he is expected to have a breakout game against the Seahawks who have given up a league leading 1,319 yards to opposing receivers. Parker is a solid start against the Seahawks weak secondary.

Marvin Jones, Detroit Lions. After an embarrassing 11-game losing streak, the Lions were finally able to break it and beat the Cardinals. While this is a major accomplishment for the Lions, Jones has not seen the same success that his team has enjoyed. Jones has been a major dissapoint to fantasy owners as he has only put up 129 receiving yards and one touchdown in the first three games. With Kenny Golladay now back in the lineup too, Jones is now going to lose even more targets. The Lions also are up against a Saints team with one of the better secondaries in the league. As long as Jones continues to disappoint, he should stay on every fantasy managers bench.

Zach Ertz, Philadelphia Eagles. In a game that neither the Eagles or Bengals wanted to win, Ertz was able to bring in seven receptions for 70 yards. Ertz had a better game this week due to the other Eagles tight end Dallas Goedert going down with a fractured ankle. This means that Ertz is now the main part of an Eagles offense that loves targeting their tight ends. The Eagles are up against a 49ers team that is extremely banged up, so Ertz is a great option in a phenomenal matchup.

Hayden Hurst, Atlanta Falcons. The Falcons are a cursed franchise. According to ESPN, they had a 99% chance of winning at one point in back-to-back games but still found a way to lose. While the team itself continues to choke away wins, the players themselves have had promising fantasy performances. Hurst has put up 111 receiving yards and two touchdowns in the first three games. The only problem is this week they are up against a Packers team that tends to do better against opposing tight ends. This game is going to most likely be a shootout, but Hurst is likely to have a lesser role in the Falcons offense, so make sure to steer clear of Hurst.

Nick Folk, New England Patriots. After the Patriots went down against the Seahawks two weeks ago, they redeemed themselves after a stellar victory against an up and coming Raiders team. In this game, Folk was able to make all three of his field goals and three of four extra-point attempts. Folk’s great performance will likely continue as they now go up against the Chiefs, who in previous matchups allowed the opposing kicker to make three field goals and an extra point. This game is also looking like a high-scoring game, which means Folk should be a sneaky waiver wire starter.

Ryan Succop, Tampa Bay Buccaneers. The Buccaneers have looked pretty well so far this season scoring an average of 27 points per game so far this season. Although Succop as a kicker has been pretty average, as a fantasy football kicker only putting up seven points in fantasy football per game. His average performances will likely see a drop in chances to score this week as they go up against a Chargers team that has held teams to an average of 19 points per game. Tom Brady and the Buccaneers offense still need a few more weeks to get the offense going but until then, Succop is not a starter for any week.

Buffalo Bills Defense. The Bills barely made it past the Rams after the Bills defense almost choked a 28-3 lead. This was an eye-opening performance as it surprised many who thought the game was over. However, this week is a brand new week, and the Bills defense is now ready to redeem themselves against a Raiders team that didn’t do so well against the Patriots defense only putting up 20 points. The Bills defense is a smart option for those in search of a defense for this week.

Jacksonville Jaguars Defense. The Jaguars started off on fire and were eventually brought back down to Earth after Ryan Fitzpatrick and the Dolphins scored 31 points against them. This week, the Jags are up against an up and coming offense in the Bengals led by quarterback Joe Burrow. Burrow has been a big surprise on how well he has adapted to the league and has been putting up great numbers against opposing defenses. If anyone even has the Jags defense on their roster, it would be a good idea to keep them on the bench.