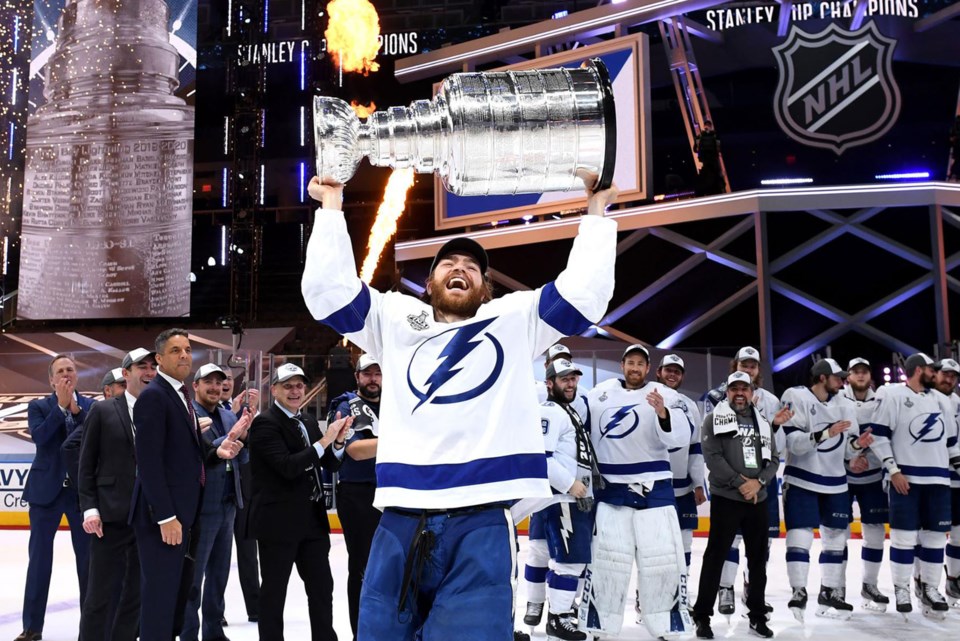 Nikita Kucherov raises the Stanley Cup after the Tampa Bay Lightning defeated the Dallas Stars in 6 games. The Lightning prevailed in this year’s playoffs after a shocking upset in last year’s Stanley Cup Playoffs. Photo courtesy of moosejawtoday.com.

It may not initially appear that the Virginia Cavaliers and Tampa Bay Lightning have anything in common — one is a college basketball team and the other is a professional hockey team. But when you take a deeper look into their playoff runs, both teams endured improbable turnarounds over the span of one season.

Despite not receiving the national attention of Virginia’s national championship, the Stanley Cup run by the Tampa Bay Lightning was just as monumental of a turnaround. In fact, the two are so eerily similar that it is no coincidence the two are linked.

For each team, the story begins with an unprecedented loss or elimination. For Virginia, they made history by becoming the first No. 1 seed to lose to a No. 16 seed in the NCAA Tournament in 2018. As for the Lightning, they became the first team to win the President’s trophy — the best regular season record — and promptly lost in the first round of the Stanley Cup playoffs without winning a single game.

Despite these setbacks, both teams found a way to overcome their historical defeats by respectively making the biggest single-season turnarounds in sports history.

It’s Mar. 16, 2018, and millions of stunned viewers watch as the No. 1-seeded Virginia Cavaliers — one of the championship favorites — lose their first round game to UMBC. The 2018 Cavaliers were the first No. 1 seed lost to a No. 16 seed in the NCAA tournament, and few had expected it out of this team.

For the Cavaliers, it was an utter embarrassment to the program. A blueblood program is not supposed to be run out of the gym by a team from the America East conference, a league only college basketball experts will recognize.

Heartbroken, Virginia players and coaches trudged back to the locker room with many questions left to be answered. What was the future of the Virginia basketball program? Would there be a shakeup among the coaching staff? The outlook of the Virginia basketball program had seemingly been altered in a two-hour time period. Many people wondered how the Cavaliers would respond to such adversity in the following season. What transpired was a story few could have predicted.

The following season, the Cavaliers once again entered the NCAA tournament as a No. 1 seed, having amassed a 29-3 record during the season. In their first game of the NCAA tournament, against No. 16-seeded Gardner-Webb, Virginia got off to a slow start, and it looked like a possible repeat of 2018. However, the Cavaliers regrouped and defeated Gardner-Webb to advance past the first round.

Victories against Oklahoma and Oregon led to an Elite Eight matchup with Purdue. Virginia trailed the Boilermakers 70-68 with just 5.9 seconds left. But, Virginia forced overtime with a miraculous buzzer beater by forward Mamadi Diakite. Virginia guard Kihei Clark held the ball from beyond half court with less than three seconds left, and threw a cross-court pass to Diakite, who hit a mid-range jumper over Purdue’s Matt Haarms. Virginia went on to win the game 80-75 in overtime despite 42 points and 10 3-pointers by Purdue guard Carsen Edwards, a current Boston Celtics guard.

In the Final Four matchup against Auburn, it once again looked like it was over for the Cavaliers with Virginia trailing 61-57 with less than 10 seconds remaining. However, Kyle Guy, current Sacramento Kings guard, hit a triple off a screen to cut the deficit to just one point. Auburn sank a free throw to re-extend the lead to two points. In typical Kyle Guy fashion, Guy drew a foul on a 3-point attempt with 1.5 seconds remaining. He made all three free throws leading Virginia to its first-ever national championship game.

In the national championship, the Cavaliers faced off against Texas Tech. Virginia once again found themselves down by three points with 15 seconds remaining. Down 68-65, Virginia guard DeAndre Hunter was able to hit a game-tying 3-pointer to force overtime. They prevailed 85-77, winning their first championship in school history and wrapping up their ultimate redemption story.

For Virginia, their story ended there, but their unprecedented turnaround would prove to become something that inspired teams across the world.

Less than ten days after Virginia completed their redemption story, on Apr. 17, 2019, the Tampa Bay Lightning suffered their own historic upset. After winning 62 games in the regular season, an NHL record, the Lightning were swept out of the first round by the Columbus Blue Jackets, a team who had never previously won a playoff series.

It would be the equivalent of the U.S. Men’s National Team losing to Trinidad & Tobago in a World Cup Qualifier. Oops that happened too.

After the Lightning’s defeat against the Blue Jackets, many wondered how the Lightning would perform the following season after such a shocking elimination.

The next season, the Lightning entered the Stanley Cup playoffs with the second-best record in the Eastern Conference. In the first round of the playoffs, the Lightning faced the Blue Jackets, the same team who eliminated them in the previous season.

Game 1 of the series went to five overtime periods, in which the Lightning prevailed 3-2 to take a 1-0 series lead. The Lightning won the series in five games to advance to the second round. They made it past the No. 16 seed.

In the second round, pitted against the Boston Bruins, the top-seeded Eastern Conference team, the Lightning won in five games. On to the Final Four.

In the Eastern Conference Finals, the Lightning faced off against the New York Islanders. Despite a more challenging and demanding matchup compared to their previous opponents – a team with very good defense- the Lightning still prevailed in six games and advanced to the Stanley Cup Finals, just one year after their historical first round upset. National Championship here we come.

The win gave the Lightning their first championship since 2004, just one year after their shocking first round exit, a “One Shining Moment” that American fans won’t hear about because it was in a bubble north of the Canadian border.In his post-game press conference, Lightning coach Jon Cooper donned a Virginia National Champions hat. When asked about why he was wearing the hat, Cooper responded: “I don’t know Virginia. I don’t know Tony Bennett, but they’ve been something to hang hope on the whole time.”