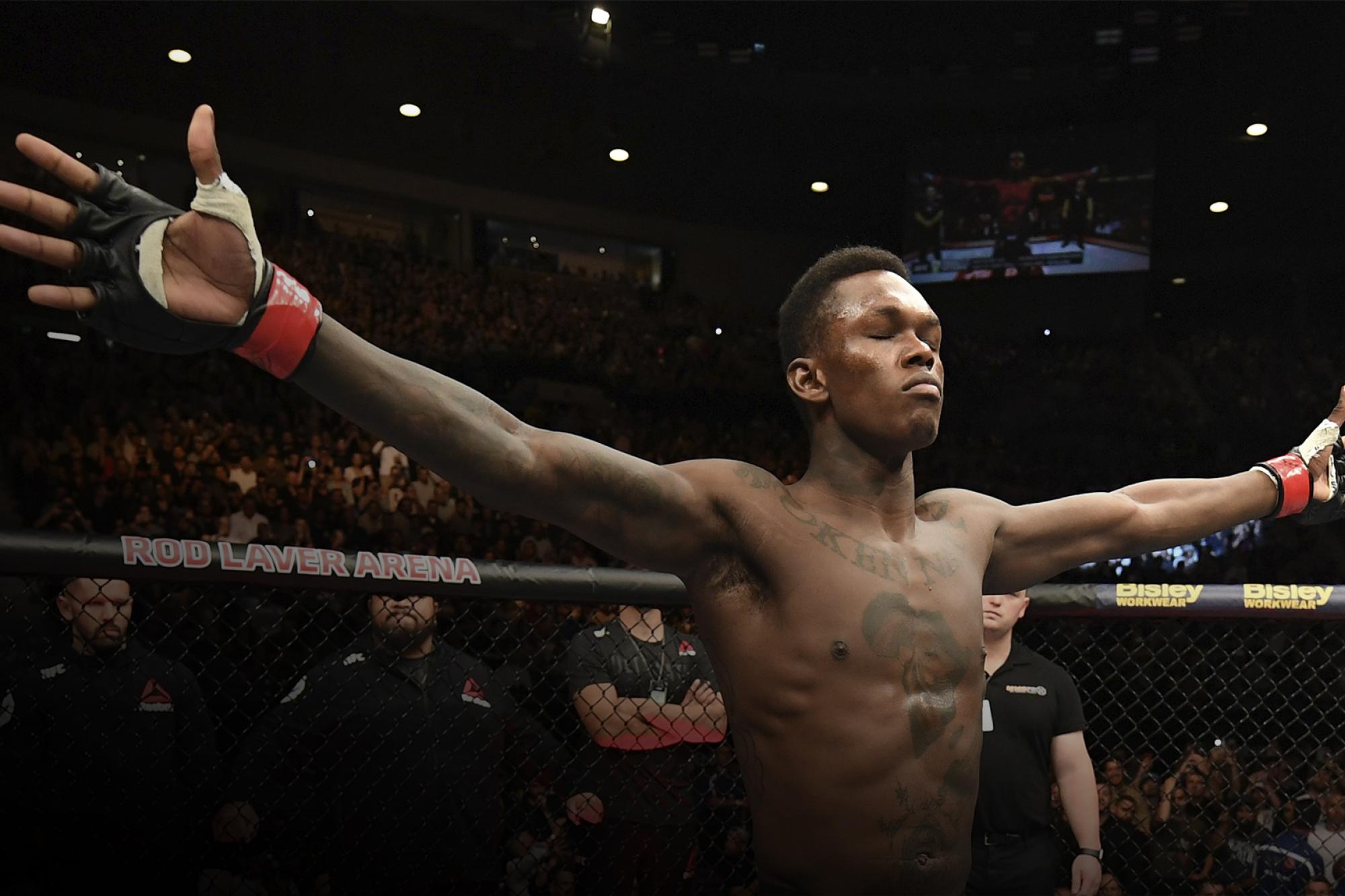 Israel Adesanya gears up for action before a fight in 2019. Adesanya is now 20-0 in mixed martial arts fights in his career and is the reigning middleweight champion Photo by UFC.

Ever since the UFC has returned to speed following the pandemic-induced global shutdown, interest in the sport has increased both nationally and internationally. With almost no other sports to watch, people are tuning in to the UFC.

The past three months have perhaps been the best in the 27-year history of the UFC. Since the restart, the UFC has hosted five pay-per-view events, most recently UFC 253 on Sept. 26. The fight was capped off by middleweight champion Israel “The Last Stylebender” Adesanya defending his belt in dominant fashion against the undefeated Paulo “Borrachinha” Costa.

Adesanya himself is undefeated, now with a record of 20-0 as an MMA professional. The former kickboxer is one of just two undefeated ranked fighters in the UFC, the other being the lightweight champion Khabib Nurmagomedov.

Adesanya debuted in the UFC in December of 2017, became the middleweight champion in under two years and already ranks No. 3 in the UFC’s pound-for-pound rankings behind only Nurmagomedov and the top-ranked Jon “Bones” Jones.

The middleweight king has defeated seven currently-ranked middleweight contenders — and that doesn’t include his unanimous decision victory over Anderson Silva, who is widely considered the best middleweight fighter of all time. But despite his overly impressive resume, most fans did not start giving Adesanya serious recognition as the best pound-for-pound fighter in the world until he defeated Costa.

To many casual fans, Costa was going to dominate Adesanya. Costa, formerly known as Paulo Borrachinha, outweighs Adesanya by a notable margin. While both fighters compete at the middleweight limit of 185 pounds, Costa cuts significantly more weight to get there.

Costa’s power is undeniable, as he has 11 knockouts to his name and only won one fight by decision, an exciting brawl against the ever-dangerous Yoel Romero. Looking at the size difference between Costa and Adesanya, most people immediately wrote off “Izzy,” claiming that Costa would wipe him out easily.

But to most pundits and die-hard MMA fans, it was clear there were only two ways the fight could play out. Costa, using his strength and aggression, could have forced the fight into close quarters and made it an all-out brawl, or Adesanya would dominate Borrachinha by keeping his distance and utilizing his length.

It turned out that the latter was the end result — Adesanya never let Costa get close to him at any moment and brutalized Costa’s legs with the same leg kicks that hurt Romero, whom he fought in his first title defense. After controlling the tempo and distance for round one, Adesanya landed a clean head kick to Costa’s temple, causing him to bleed badly near his right eyebrow and eventually finish the fight.

What people seemed to forget is how often he has to prove people wrong. He has heard the skinny comments his entire life and continues to dominate every MMA fight he enters.

“I think people really don’t understand my game when they look at me,” Adesanya said in a pre-fight press conference for UFC 253. “All the casuals, man, they’re going to watch the fight and be like ‘what?’ when I defeat Costa. They’ll be like ‘how did the skinny guy do that to the big dude?’, especially in the way I plan on defeating him.”

Disregarding the nonstop criticism about his size, Adesanya has proven doubters wrong since the beginning of his career. He defeated Brad Tavares when many said Tavares was too powerful for him, and did the same to Derek Brunson, Robert Whittaker — and now Costa. It is hard to not notice how small Adesanya looks in the octagon at middleweight as he looks like a welterweight, but his track record is impossible to overlook.

To compensate for his lack of power at 185 pounds, the champion’s cat-like reflexes, unbelievable finesse and ability to anticipate and react puts him far and away as the best middleweight on Earth. It becomes almost impossible to beat him. His length keeps opponents too far to make an impact, and his ability to seemingly land every hit he throws on the chin makes people hesitate to charge at him.

It is a lose-lose for opponents. Romero and Costa kept their distance and succumbed to Adesanya’s leg kicks and reach. Whittaker tried to force the action by closing the gap and got knocked out by Adesanya’s underrated punching power. Make no mistake, Adesanya may not be the most powerful fighter in the division, but his power remains vastly underrated. And when it comes to fighting IQ, nobody in the current fighting world can outsmart Adesanya.

Adesanya’s movement is unlike any other fighter in the sport. That, along with his love for anime, gave him the nickname, The Last Stylebender.

“Stylebender is based on freestyle,” Adesanya said. “I tried to bend my way through each martial art and master each one like what they did with the elements in Avatar. It’s uniquely me. Some people have the same fight names, no one else can ever have this.”

Fans hope for an eventual superfight between Jones and Adesanya, which would only be possible if both fighters agree to fight at the light heavyweight limit of 205 pounds. Both fighters seemed inclined to make it happen. The trash talk has already begun, and Adesanya is already calling himself “the light heavyweight champion of the world.” Should Adesanya defeat Jones, there would be no doubt in labeling him the best mixed martial artist right now.

Jones vacated his light heavyweight belt last month to pursue a career in the heavyweight division, but remains the top-ranked pound-for-pound fighter in the world. Many experts and analysts consider Jones to be the most skilled fighter of all time.

Should they fight, their contrasting styles would be intriguing, as Adesanya — the more skilled striker — would have to hold off Jones with his length and leg kicks as he does every time out. Adesanya has never attempted a takedown in his career and would have to keep the fight standing against Jones, an experienced grappler.

Though Jones has never lost a fight aside from the one disqualification in his career, Adesanya matches up with him as well as anyone he has ever faced. The two fighters who gave Jones the most trouble were talented and lengthy strikers. Both Alexander Gustafsson and Dominick Reyes had a case to have won their fights against Jones in their narrow defeats and found success in using their length to close the gap that Jones likes to keep from his opponents.

While all three fighters in Gustafsson, Reyes, and Adesanya possess similar skill sets, Adesanya is a much more talented boxer than both Reyes and Gustafsson, suggesting he would give Bones the toughest fight of his decorated career.

Amazingly, Adesanya has accomplished everything he has done in the fight game at just 31 years old. After winning his 100th career fight, the Stylebender has just submitted a claim for the top pound-for-pound fighter in the game right now and continues his chase to be the best combat athlete of all time.