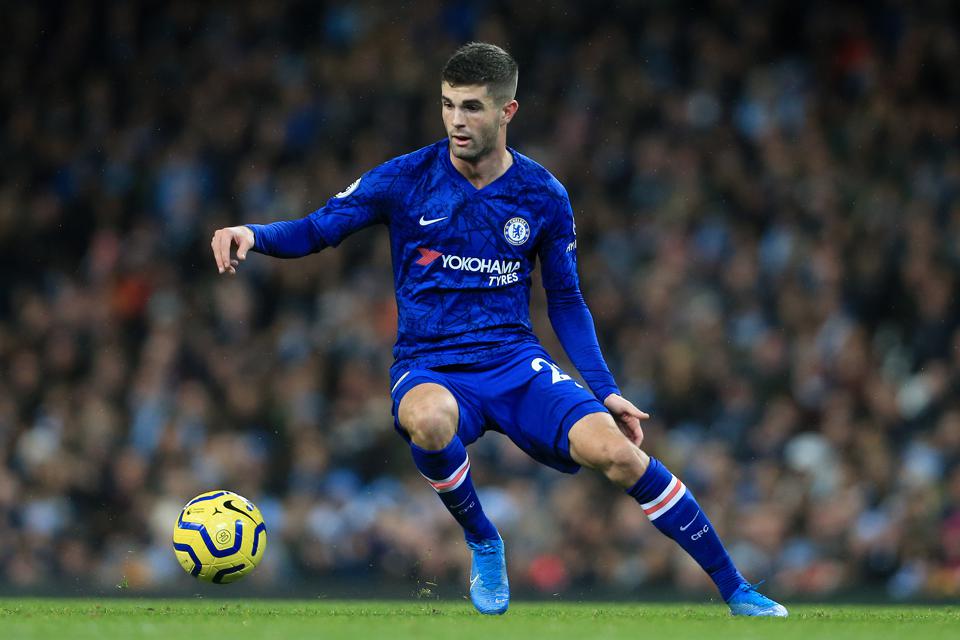 Christian Pulisic makes a move in a match for Chelsea this season. Pulisic and other young American players should make for an improved U.S. Men’s National Team soon. Photo by Forbes.

In October 2017, soccer fans around the world were left shocked after the United States Men’s National team was defeated by Trinidad and Tobago. The defeat meant not qualifying for the World Cup for the first time since 1986.

Ever since that defeat, the future for the USMNT has continued to get brighter and brighter. There have never been more Americans spread across Europe’s biggest clubs, with 10 making this season’s Champions League rosters. The expansion of young American players on top European teams has resulted in what will most certainly be the golden age for U.S. men’s soccer.

It all started with midfielder Christian Pulisic. His 2015 move to Borussia Dortmund, a German powerhouse, paved the way for other young players. After his success on the Dortmund’s first team, Pulisic became the most expensive North American player with a move to Chelsea in 2019 for around $73 million. He now wears the number 10 jersey on the U.S. team, a number that represents a team’s most prolific playmaker.

Pulisic’s development since 2017, when he was still at Dortmund, makes him the most important piece to the future of the USMNT. Not only is Pulisic the most talented player on the roster, but he will be expected to be a leader for those following in his footsteps.

Next, players like Weston McKennie, Tyler Adams and Giovanni Reyna are crucial to the team’s midfield presence and ability to control the game.

Adams is coming off recent success with RB Leipzig. Adams scored the game-winning goal to propel Leipzig to the Champions League semifinal in August. He became the only American player to score in a Champions League quaterfinal or later.

McKennie most recently completed a loan move from Schalke to the Italian powerhouse Juventus. McKennie gets to play with the best in the world — namely, Cristiano Ronaldo — and learn from one of the best midfielders ever in his manager, Andrea Pirlo.

The most electrifying player is 17-year-old Gio Reyna. The teenager has taken a similar path to Pulisic by coming through the Dortmund academy, making a huge impact at such a young age. In early October, Reyna was the first American to record a three-assist match since 2008 in Dortmund’s 4-0 win against Freiburg on Oct. 3. Reyna has received high praise from his teammates and has a special ability to pick out a pass, which will be crucial if the USMNT is to be successful in the 2022 World Cup.

“I call him the American Dream. That’s true. He is 17 years old and what he’s doing on the pitch today is amazing. He has a huge future in front of him,” Reyna’s teammate, Erling Haaland, said in an interview with BT Sport.

The presence of three midfielders who are playing with and against world-class European talent is unprecedented for U.S. soccer. McKennie and Adams play dynamic roles in that they need to both support the defense as well as control the tempo and keep the ball. On the other hand, Reyna has the responsibility of providing the final ball and creating chances for attackers.

In the back, outside back Sergiño Dest and goalkeeper Zac Steffen are starting to get some first-team minutes at their respective clubs.

Dest just completed a move from Ajax to Barcelona, where, like McKennie, he gets to play with one of the best in the world in Lionel Messi. Dest, at just 19 years old, made his debut earlier this month against Sevilla and was the first American to play in a Spanish league match for Barcelona. Dest serves as more of an attacking option to the outside back position, rather than a lockdown defender. The young defender has been vocal about his excitement for U.S. soccer.

“Everyone is hungry, everyone wants to achieve something with the U.S. That’s a good sign. We all want to win a World Cup, achieve great things, not only personally, but also as a team for the U.S.” Dest said in a recent press conference.

Steffen made his debut for Manchester City last month and will gain experience through the Carabao Cup and FA cup this year, as he’ll be the backup to Brazilian goalkeeper Ederson Santa de Moraes, known commonly as Ederson. Steffen takes up a majority of the goal, standing at 6’3”. To add to his height, his athletic ability earns him the right to be compared to the great Tim Howard.

In addition to the players already mentioned, youngsters like Josh Sargent, Chris Richards and Timothy Weah mixed in with veterans like DeAndre Yedlin, John Brooks and Jozy Altidore make for a very strong squad.

There’s no denying that the team has talent, which means a lot of the pressure inevitably falls onto manager Gregg Berhalter to make the most out of the opportunity. Berhalter was previously manager for Columbus Crew SC and made the MLS playoffs in 2014, 2015, 2017 and 2018.

If Berhalter draws the best out of the young talent, results will come. The starting lineup has the ability to use their pace to counter attack teams that are possession-based and keep the ball against teams that like to sit back and defend.

There’s still two years to go, a qualifying format to navigate and the strange realities of today’s COVID world to deal with before the next World Cup. Despite all that still has to happen, this is the most talent any USMNT has ever had — and it’s not naive to say that this is indeed the golden age for men’s soccer in the U.S.