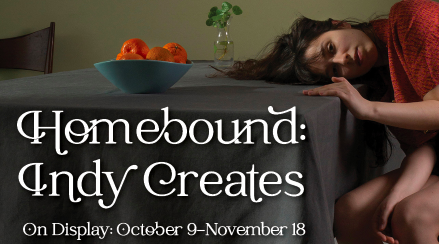 While in quarantine, artists from all over the world have been challenged to continue creating art. Some are confined to their homes instead of working in a studio, while others are stuck using unconventional materials that they would normally shy away from. This is especially true for the artists in the Indianapolis community, which the Indianapolis Art Center has taken notice of through the opening of their latest exhibition: “Homebound: Indy Creates.”

The exhibition, which is centered around various works created while living in unprecedented and unpredictable times, opened on Oct. 6. It features over 60 works from 25 Indianapolis-based artists, all of which were created in the midst of the COVID-19 pandemic. The bodies of work range anywhere from traditional paintings to quilts, lighting fixtures and other uncommon mediums. All these artworks have one thing in common: they are all takes on what an artist’s home environment, daily lifestyles or mental states look like during a pandemic.

Jo Banister, the exhibition and galleries manager at the Indianapolis Art Center, played a large role in curating and installing the art found in “Homebound.” She said that while the theme or mood of different works of art might vary from artist to artist, they all relate to the current events of the world.

“Going through the art, it seemed like there were a couple of routes [artists] were taking,” Banister said. “Whether they were making art that was very literal, like ‘these are things that are around the house that I’m going to paint’ or other works from people who had to change their processes. The murder of George Floyd took place, the massive protests of racial inequality took place, so there’s also a lot of artwork that references that.”

Bamgbose, a painter who works mostly in portraiture, developed a gallery known as “Verses: A Poetry-Inspired Collection.” Her gallery uses a mixture of paintings and poetry to tell a story of external human experiences and internal consciousness. Both solo exhibitions were created primarily during the COVID-19 pandemic, thus tying to the central idea of the “Homebound” exhibition.

One of the paintings from Taylor Bamgbose’s “Verses: A Poetry-Inspired Collection.” Photo by Andrew Krivksy

Howell and Bamgboses’ art represent only the tips of the iceberg when it comes to works of art found at the “Homebound” exhibition. According to Banister, every artist was forced to think outside the box in some way, specifically with the actual material and inspiration that they use to create the art.

“There’s three pieces where an artist used her own menstrual blood to create, which is really getting off-the-walls with your materials,” Banister said. “There are also a lot of really great self-portraits from an artist that I have seen around. She was probably just hanging out in her house making weird faces and decided to draw herself.”

“At Home Freedom” — the work containing menstrual blood by Elizabeth Elich — as well as the self-portraits by Chanya Ruby are two examples of works by artists who were working with resources they had available while stuck at home. Another work of art, titled “Okara as Flora,” was created using embroidery thread, acrylic and graphite on fabric.

The idea of artists being forced to work in unusual conditions with limited resources hits close to home for Butler students like Madelin Snider, a sophomore art and design major. Snider said that most art students have been required to adapt to a virtual learning environment, as they are stuck at home or in a dorm with no in-person classes. She shared how virtual learning has affected her process of creating art.

Jamie Tarman, a junior arts administration major, is taking a completely remote semester. She said she too feels separated from the rest of her classmates, and misses the collaborative nature of the busy studio she once was able to create art in.

“I miss being in the classroom and the studio and being with other artists,” Tarman said. “I think there’s a lot of value to that, being able to be with your peers and bouncing ideas off of each other. I really miss that element. It’s nice to work independently, but I’ve been doing that for so long that it would be nice to get back in the studio.”

There are some positives to the situation, though. When asked if she enjoyed anything about taking art classes online, Tarman said she loves how much creative freedom she has.

“I’m really able to challenge myself where I want to be challenged,” Tarman said. “I like the timing of things too. My graphic design class has mostly been an assignment every week, so I’ve liked the pace. I don’t feel bored or like I’m being held back. It’s nice that we don’t have to meet synchronously as well.”

Snider said she also felt that there were some positives to creating art remotely during quarantine. While discussing the art she’s working on, she related an experience she had creating art over the summer to how the artists in the “Homebound” exhibition are forced to experiment with materials they might not normally use.

“I had a bunch of painting supplies that I never use because I mostly work with digital and colored pencil stuff,” Snider said. “I don’t usually use paint, but I’ve done a bunch of that over quarantine considering that’s what I had…I hadn’t used [the painting supplies] so I figured ‘why not?’”

“Homebound: Indy Creates” at the Indianapolis Art Center captures local artists’ persistent creativity by allowing each featured artist to showcase the work they have created in isolation. When asked if there was a specific piece of art in the exhibition that she felt was her favorite, Banister said she could not decide.

“This is such a cop-out answer, but I feel like the show is so varied that it’s hard to say that there’s just one piece that’s a must-see,” Banister said. “I think that you have to take it all in as a whole.”

Cop-out or not, the exhibition features plenty of unique artwork that will give patrons a lot to admire, in a time where support for the arts is needed most. To make the exhibition more accessible during the pandemic, the Art Center is installing 360-degree cameras that will allow people to view the gallery virtually via their website. “Homebound: Indy Creates” will be available until Nov. 18.