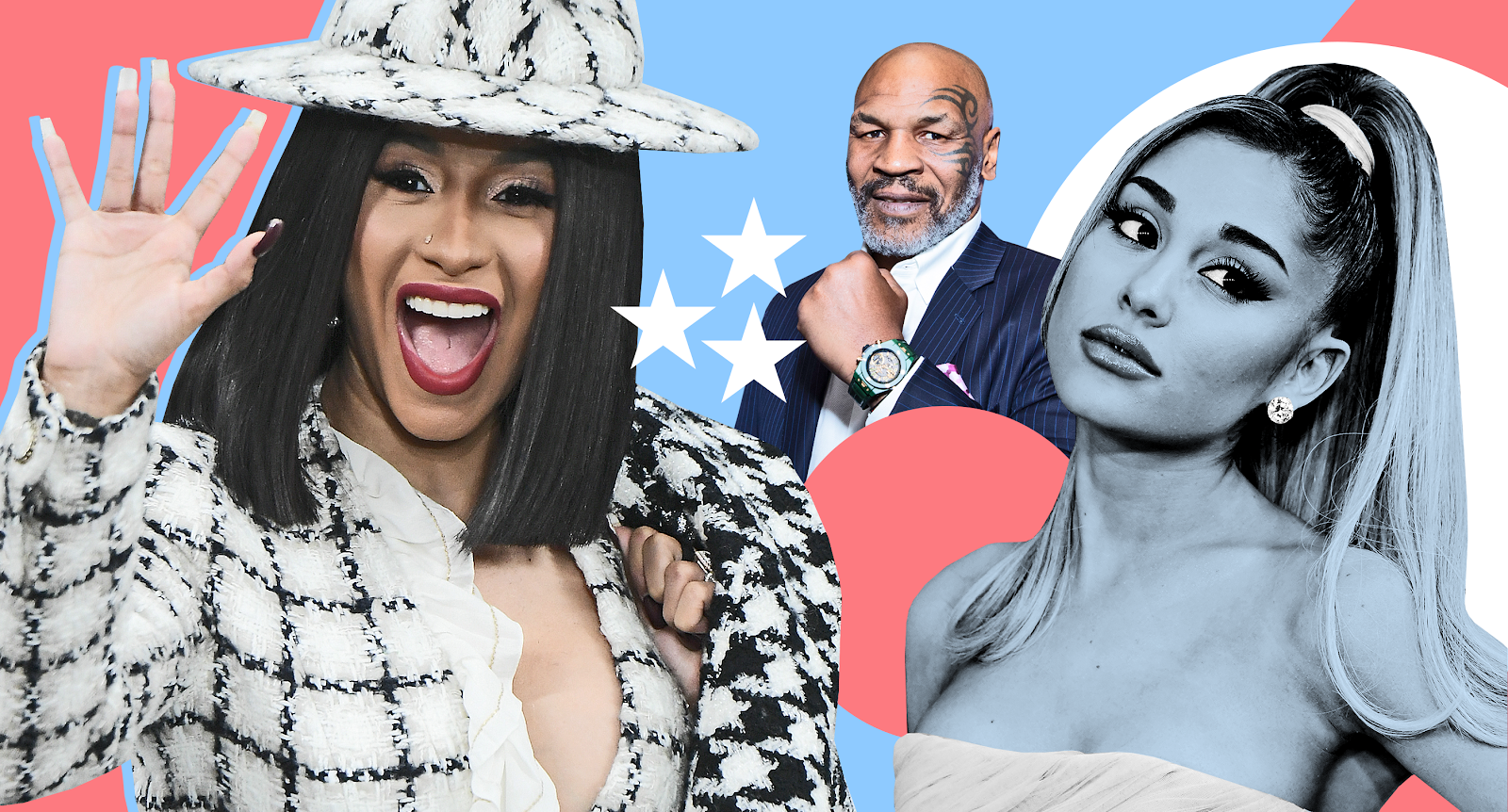 From Cardi B to Mike Tyson, many celebrities have announced who they will be voting for in the 2020 presidential election. Photo courtesy of Yahoo.

When it comes to celebrities’ endorsements of presidential candidates, some students see endorsements as a way for celebrities to use their platform to promote political participation. In the perspectives of other students, celebrities have no place sharing their political views due to the potential political-brainwashing and lack of personal research from followers. Many celebrities have spoken out about the candidate they are voting for the 2020 election, but the real question is: do endorsements belong in popular culture?

Some students, like Charlotte Hilker, a senior philosophy and communication sciences and disorders major, affirm that celebrities most definitely should voice their endorsements, thus proclaiming that pop culture and politics are undoubtedly connected — and should stay that way.

“I think that celebrities ought to have a place in politics because they have so much power with what they say and they have a duty and need to use the voice that they have to lift others up and make sure that their followers are doing things that are positive in the world — and politics is a very large contributor to that,” Hilker said.

Senior psychology major Katie Tisdale agrees that political participation should be mandatory for celebrities, or anybody with a large following.

“With how much influence [celebrities] have in terms of social media following, it’s their obligation not just to endorse candidates but to educate people,” Tisdale said.

A shallow endorsement is counterintuitive, however, according to junior criminology major Will Gigerich. Gigerich believes that celebrities must educate their followers in addition to announcing their endorsements since unsupported decisions could lead to followers making uninformed decisions that in turn, impact the entire country.

“It’s not an inherently negative thing when celebrities endorse candidates or share their opinions, but I think it has the potential to be negative once viewers of that content decide that that’s how they’re going to base their opinion without doing anything further research on their own,” Gigerich said.

Another issue that lies in the gray space between popular culture and politics occurs when celebrities support candidates that their followers do not endorse. While some students denounce these celebrities, others believe that it is possible to separate the celebrity from their endorsement.

On the one hand, for Hilker, it would be difficult to look past a celebrity who endorses a candidate she is not in favor of, especially because listening, watching or subscribing to celebrities contributes to their bank accounts — the same bank accounts are often used to donate to presidential campaigns.

No, politics do not belong in popular culture.

Unlike Hilker and Tisdale, Samm Totten, a junior criminology and psychology major, finds celebrity endorsements to be unnecessary and problematic, breeding issues like voters who do not educate themselves before heading to the polls.

“I think people should be able to think for themselves,” Totten said. “When celebrities endorse candidates it kind of puts pressure and influences people to [vote for] those candidates because people are kind of infatuated with celebrities, so they’re just going to do what they see other people doing,” Totten said.

“I feel as a whole, [endorsements from celebrities] are relatively ridiculous,” Hight said. “Do I think you should care that Mike Tyson endorsed Donald Trump? No. Do I think that you should care that Cardi B at one point endorsed Bernie Sanders? No. You shouldn’t care… By and large, most [celebrities] are not in the position to be telling people who they should vote for,” Hight said.

Furthermore, endorsements can become a severe problem when celebrities publicly bash the opposing candidate and that candidate’s followers, according to Gigerich. In the United States’ current, polarized political climate, more animosity only increases tensions between the Democratic and Republican parties.

“I think if [a celebrity] endorsed a candidate and decided to attack the opposing side of their supporters, I think that’s more of an issue than saying ‘well here’s where I stand and why,’” Gigerich said.

Sophomore biology major Chad Chezem said that separating celebrities from their endorsements is a simple and acceptable action.

“I have friends who don’t believe the same, [politically] as me but that doesn’t change our friendship,” Chezem said. “Just like my favorite actor or professional athlete endorses the candidate I’m not supporting, it doesn’t mean I can’t like them.”

Tisdale, like Chezem, has learned to separate celebrities from their endorsements, most recently with Kanye West’s 2016 presidential endorsement of Trump. Despite wanting celebrities to use their platform for educating their followers, Tisdale believes personal research is imperative when it comes to formulating decisions on candidates.

“I’m still a Kanye fan, I still love the music, but I am more questioning about him as a person,” Tisdale said. “[Endorsements] definitely start a conversation, which I think is the goal, to have conversations about politics, so we can better educate ourselves.”

As a fervent sports fan, James Harris, a junior risk management and insurance major, agrees with Tisdale and Chezem, affirming that people should be able to have different political beliefs than the celebrities they follow.

“Most celebrities or athletes are democrats and honestly, I don’t care; I like them,” Harris said. “For example, I’m a huge NFL and NBA fan. It doesn’t bother me. If I can choose who I like, then they can too. I don’t think people should consider who they like by the way that person votes,” Harris said.

While some students like Totten and Hight disagree with explicit celebrity endorsements and others, like Hilker and Tisdale are all for them, the students interviewed unanimously believe that celebrities should use their popularity to encourage followers to participate in politics, do their own research, and vote.