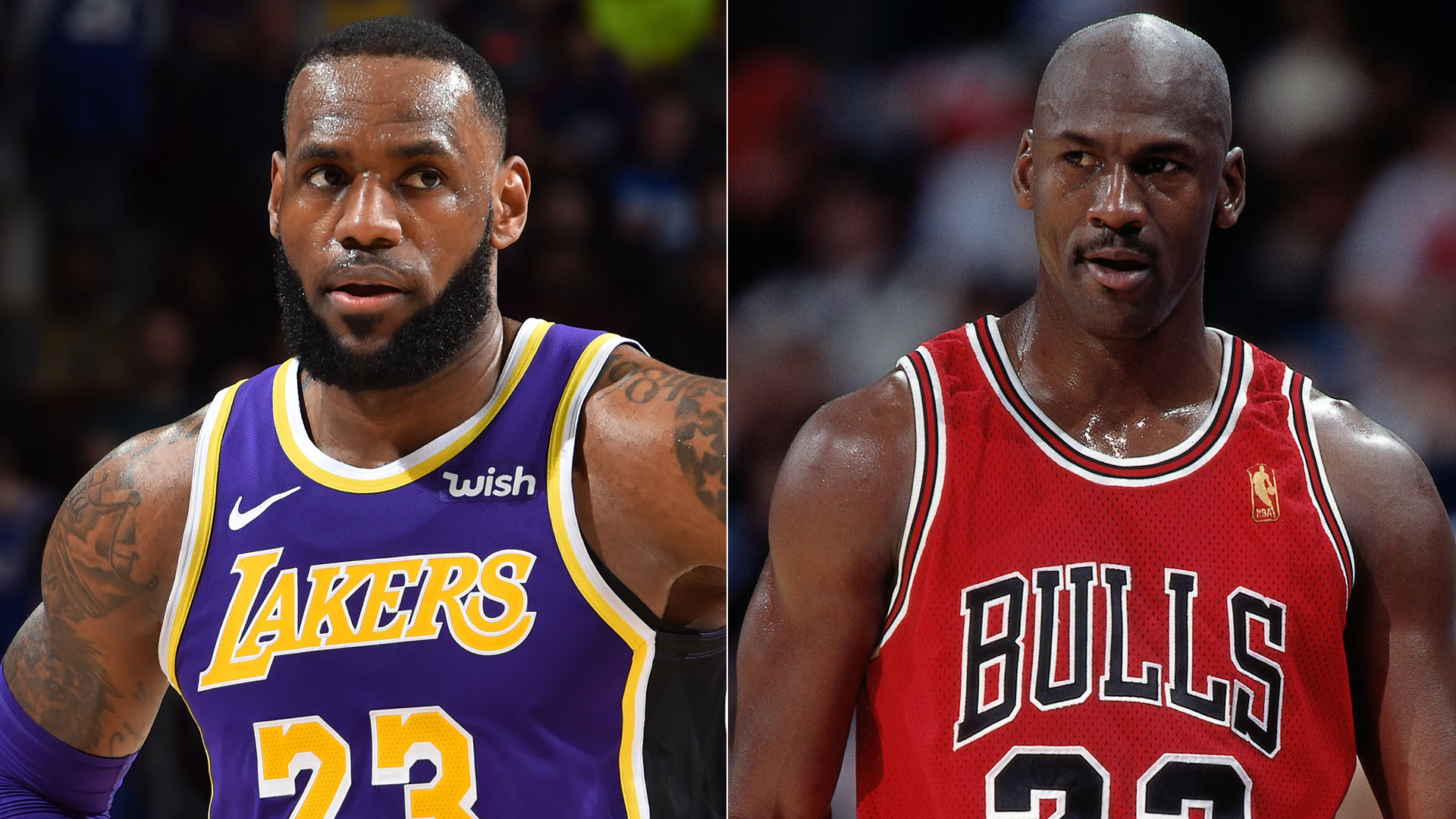 LeBron James and Michael Jordan are largely considered to be the two greatest basketball players of all-time. Who is number one you may ask? Our sports reporters duke it out debate-style. Photo courtesy of nba.com.

Similar to politics, sports can be an environment for loud and berating arguments that often do not leave either side’s mind unchanged. While they are not arguments about healthcare or Constitutional rights, they sometimes seem to mean just as much to those in the conversation. Who is the greatest player in this sport? Era? Region? The Butler Collegian sports section members state their claim and make their case as to why they are right and any other opinion is wrong.

The argument for: Michael Jordan

Air Jordan did things on a basketball floor that no one has ever done nor will ever do again. Jordan was the scoring champion of the league for 10 years, but he was also named to nine All-Defensive first teams. Did we mention yet that he is 6-0 in the Finals? He has more rings than LeBron with players like Luc Longley starting alongside him. He revolutionized the NBA and is the main reason it is a global league today and is the only former player to have majority ownership in an NBA team. His Airness deserves your respect.

The argument for: LeBron James

LeBron will undoubtedly become the league’s all-time leading scorer by the time his playing days are over, not to mention his sizable lead over Jordan in rebounds and assists. Never in sports have we seen an amateur with more hype around them and yet still exceed expectations. Laugh all you want at the Finals record, but LeBron has transcended sport and is squarely entrenched in American culture. He has gone to ten NBA Finals in his career and already has the most NBA All-First team selections in NBA history. He’s just 35 years old. Give the King his crown.

The argument for: DH everywhere

Baseball fans want to see three things nowadays: homeruns, homeruns and more homeruns. Baseball needs to evolve to avoid becoming a sport that only old men enjoy watching on their black-and-white television. Get rid of the free out that pitchers get when their opposing arm comes up to the plate wanting no business being up there. Why not just replace him with a slugger who actually has some batting skill who could hit the ball 400 feet into the bleachers?

The argument for: Pitchers hit in National League

Remember an all-time moment like Bartolo Colon hitting a homerun? That would be all but gone if the MLB adopts the new universal DH rule for all of baseball. Having your pitcher bat in the lineup creates a whole new level of strategy for baseball managers that makes the game more interesting and more connected to its traditional roots as America’s pastime. Bring back the art of the sac bunt and the double switch. Baseball is a chess match, not a track meet.

The argument for: Kelan Martin

The Butler Way emphasizes team success over anything else and Kelan Martin did just that. Martin and Tyler Wideman appeared in and won at least one NCAA Tournament game in each of their four years at Butler, something no other Butler class did. Martin has the second-most points in Butler program history and is currently playing for the Minnesota Timberwolves in the NBA. While Kamar has more highlights of the two, Martin deserves recognition for his consistency and the expectation of winning on the nation’s biggest stages.

The argument for: Kamar Baldwin

Can you think of a more clutch player in possibly the history of college basketball than Kamar Baldwin? Think of the end of the Northwestern game in 2016 or the Villanova and Xavier games in 2020. A four-year starter at Butler, Baldwin was named to the All-Freshman team, second team All-Big East as a junior and a first team All-Big East selection as a senior. In poetic fashion, the final shot of his career was to sink the Bulldogs’ biggest rival. Had he had a chance to go to the Big Dance his senior year, this wouldn’t be a question.

The argument for: Serena Williams

Serena Williams is an idealistic example of perfecting one’s craft and dominating a sport. Williams has been winning Grand Slams since before most of the current Butler students were even born yet, and at 39 years old, she is still among the top tennis players in the world. She is one Grand Slam away from tying the all-time record for any tennis player, male or female. Her legacy is only heightened by the fact that she almost died while giving birth to her daughter and is still picking up wins at the highest stage of tennis.

The argument for: Simone Biles

What makes Simone Biles’ legacy so great is that she is just getting started with it all. Biles was just 15 years old when she first appeared on the U.S. Gymnastics national team and has dominated in the eight years since. Look at her 19 World Championship gold medals to get a glimpse at how insanely great she has been in her career. Gymnastics is arguably the United States’ most recognized team at the epicenter of sport in the world at the Olympics. Biles was the leader of that group as a 19-year-old. Her greatness yet untold will be worth watching for the next few years.

The prompt: Greatest coach of all-time

The argument for: Bill Belichick

It would be said tongue-and-cheek for someone to call Tom Brady a world-class athlete. Nevertheless, the Patriots have built one of the most dominant dynasties in the NFL, which has a history of having the most parity of any of the major professional sports leagues. That is all not to mention a football’s team’s success is much less attributed directly to one player like it is in basketball. Aside from an aging Randy Moss, New England has had very few superstars alongside Brady. That is a credit to phenomenal coaching and play calling.

The argument for: Phil Jackson

Sports fans recognize great coaches from their spearheading of one dynasty. Very few coaches are able to be the catalyst of two of the most dominant dynasties in that sport’s history. Phil Jackson was able to do this with both the Bulls and the Lakers. We will never know if Michael Jordan and Kobe Bryant would have achieved their greatness without Phil, but we can certainly say that it didn’t hurt. With patented offenses that were tailored to his stars, Phil Jackson has more rings than fingers to wear them.

The prompt: The greatest playoffs in sports

The argument for: NCAA March Madness

When the words “Cinderella story” or “underdog” come to mind, the first sports tournament that comes to mind is March Madness. These playoffs are not only the most thrilling but also are unique in their own way. The tournament allows 68 teams to make the playoffs compared to the usual 16 teams in the other major sports leagues. With that many teams making it to the tournament, there is a greater chance for an upset. The non-stop action filled with plenty of surprises each year proves why the popularity of the “Big Dance” is above any other playoff.

The argument for: NFL Playoffs

Once a year, people from all around the world come together with their families and friends to celebrate, enjoy fantastic food and company…and that holiday is the Super Bowl. The single elimination format of the NFL Playoffs forces teams to put it all on the line for each playoff game making every game intense. The playoffs reach their peak when over 100 million fans tune in to watch the Super Bowl. When the entire world comes to a complete stop to watch, it deserves to be considered one of the best playoffs in sports.

The argument for: #16 UMBC beats #1 Virginia

No. 16 seeds in the NCAA Tournament are supposed to just show up, get blown out against the top seed and become forgotten until next season. They were 0-139 from 1939-2017. UMBC had different plans in 2018 when they smacked Virginia, 74-54. The cherry on top was Virginia was the number one overall seed in the entire tournament. The words “UMBC shocks the world” will live on forever as this upset has secured a spot in history as one of the greatest in sports history.

The argument for: U.S. beats Soviets in Olympic Ice Hockey

In a time where Cold War conflicts between America and the Soviet Union were at its peak, the last group of heroes anyone would expect were a group of American college kids that play hockey. In 1980, one of the biggest David vs Goliath moments in sports history was the Olympic semifinal game between the U.S. and the Soviet Union. The Soviets came into this game winning the last four gold medals in Olympic hockey and were looking to make that five against a team whose average age was just 21 years old, the youngest such team in Winter Games history. The Americans went on to win 4-3 and move on to defeat Finland to bring home their first Olympic gold medal for hockey since 1960. This victory helped spread a huge amount of patriotism towards the U.S. during a time of conflict. The “Miracle on Ice” will go down as one of the biggest upset stories to ever happen.