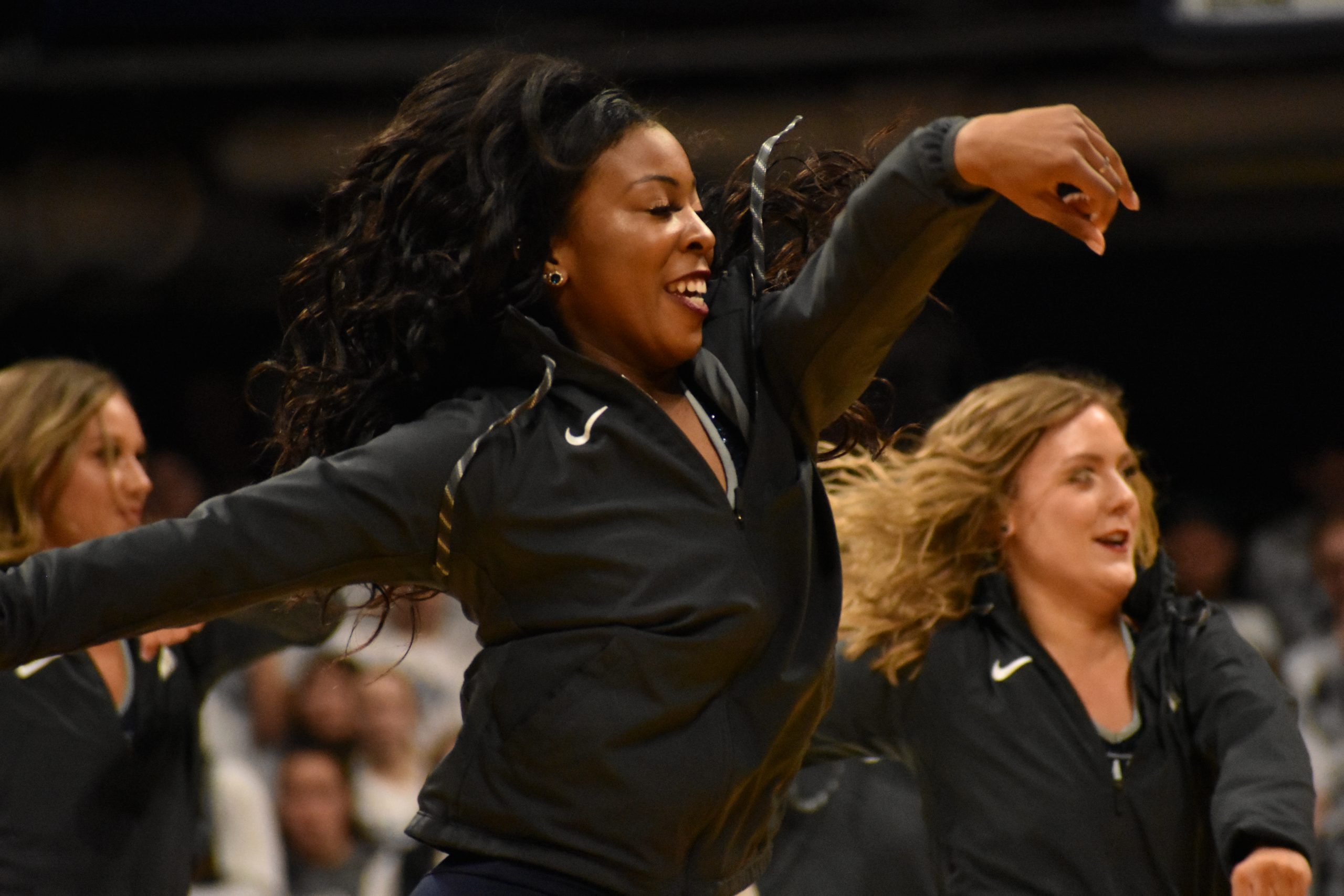 Junior dancer Kayla Hayes performs at halftime of a Butler basketball game this season. Hayes has been dancing since she can remember and is eager to get back on to the court this season. Collegian file photo.

If you have seen a performance by the Butler dance team in the past two seasons, then you’ve seen Kayla Hayes.

She’s hard to miss. More times than not, she’s at the center of the floor. Her movements match her facial expressions: radiant, happy and purposeful.

The way she performs takes months, maybe years to master. Hayes, an exploratory studies major, began dancing at DK Dance Productions in her hometown of St. Louis when she was three years old. But even when she was too little to sign up for dance classes, she was eager to fulfill her love for dance.

“Before I was the age to enroll, I would always be in the lobby and try and sneak in and dance after the other kids were done,” Hayes said.

Darci Ward, Hayes’ former dance coach and the CEO of DK Dance Productions, said that she was a natural performer from day one.

“There are certain kids who are just performers and have a natural light inside of them where they just have fun on stage and engage their audience,” Ward said. “We saw that in Kayla when she was very little and it just grew and grew as she technically developed her dance skills.”

At age 7, she began to dance competitively. With every practice, every new routine, every competition, Hayes was adding new things to her repertoire. The stage became a playground, a place where she could just let go and have fun. It was clear that this young dancer was something special.

“You just couldn’t take your eyes off of her,” Ward said. “She was a captivating performer.”

Hayes’s relationship with Ward really took off when she was 12 years old. Hayes was learning at an incredible pace, and her desire to be proficient at all things dance led her to pursue one-on-one training with Ward. It was a perfect fit.

“Teachers gravitate towards kids that want to learn and are thirsty for knowledge,” Ward said. “Kayla was one of those kids.”

Simultaneously, this gave the two a chance to connect on a personal level, creating a relationship that remains strong years later. Their bond is more “mother-daughter” than “teacher-student,” and they frequently talk on the phone.

Most of their conservations together include the state of the Butler dance team. Hayes has been on the team since her first year at Butler, and similar to when she was at DK Dance Productions, she made an early impact. Hayes won “Rookie of the Year,” an award given to the most outstanding first-year dancer on the dance team.

Hayes said she knew that she stood out on her team. Regardless, she remained humble as one could be, while at the same time realizing the important role she had at an early stage of her athletic career at Butler.

Now, as a junior, Hayes has continued her role as a leader on the team, setting the bar high and representing what it means to be a Bulldog. Paige Camp, the head coach of the Butler dance team, appreciates having that type of person on the team.

“We’re very lucky to have somebody so talented and also so kind as a member of this team,” Camp said.

Hayes’s impact on people extends far from the hardwood of Hinkle. One of Hayes’s closest friends, Renee Scott, a junior entrepreneurship and innovation major at Butler, said owes her willingness to try new things and get involved to their friendship.

“She’s pushed me to get involved because my freshman year I wasn’t really doing too many things,” Scott said. “I’m still not everywhere on campus, but she’s encouraged me to try this and that.”

Jenna Moore, a junior strategic communications major, has been a teammate and friend of Hayes for the past three years. The two live together this year, and Moore agrees that Hayes is a great friend on and off the court.

“Kayla is the best listener out of all my friends,” Moore said. “She doesn’t always give advice, but she always gives that extra ear, extra head nod or extra smile.

Those close to Hayes use many words to describe her personality, a recurrent trait being supportive. Whether it’s Kayla Hayes the teammate, or Kayla Hayes the friend, Hayes is supportive of those around her in any situation.

“She’s my go-to girl and whenever I have something going on, it’s not even a question,” Moore said. “I definitely go to her.”

Hayes credits her parents for the supportive attitude she brings to her relationships. They always insisted that she follow the golden rule.

“I’ve always grown up being taught to treat others how you want to be treated,” Hayes said. “I guess I’ve always associated that with kindness, listening to others and just being there for people.”

This ‘golden rule’ attitude, fused with a natural gift for dance and hunger for learning, has made Hayes into one of the most impactful athletes at Butler.

It’s safe to say that she’s just getting heated up.