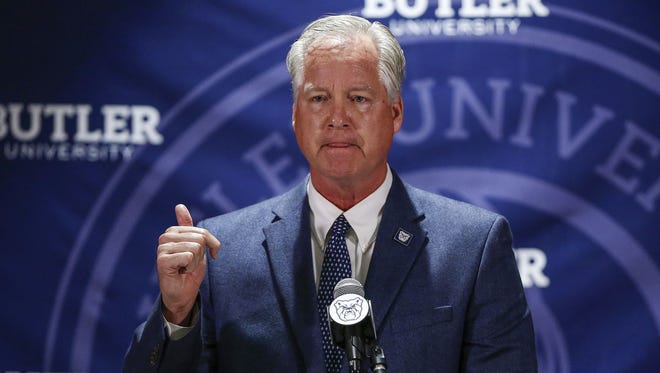 Barry Collier addresses the press last year. The Athletics department has stated their positive case rate was less than 1 percent. Photo by IndyStar.

Certain teams at Butler University are being tested for COVID-19 more often than others, depending on the sports’ inherent contact risk level.

Jack Haywood, a junior midfielder from Nottingham, England, was one of multiple men’s soccer players to test positive for COVID-19. Haywood said that he personally has been tested “six to seven times” since he returned to campus.

In contrast, sophomore swimmer Alexa Vota said she and her team have not been tested since the beginning of the year, when all students were required to be tested upon entry. Most non-student-athletes have only been tested once by the university, unless they were chosen for random asymptomatic testing, or if they have experienced second-hand exposure.

Ralph Reiff works as the senior associate athletic director for student athlete health, performance and well-being. Since March, Reiff has spearheaded Butler Athletics’ COVID-19 plan. Although the testing disparity seems unfair at surface level, Reiff said he is comfortable with where the university is currently.

“We have been very true to the NCAA’s guidance, and the NCAA has been very true to science,” Reiff said. “So, if science and the NCAA say that swimming is a low-risk sport, of having close contact with teammates and others, especially while wearing a mask, socially distancing and keeping your space clean. We also know that there is a very small risk of transmitting the virus in a chlorine pool. So, we put sports like swimming, tennis and golf into the university portal for surveillance testing.”

After speaking with different professional organizations, Reiff found a lab called Vault Health, located in New Jersey, and purchased saliva-based Polymerase Chain Reaction, or PCR tests, which at the time were the only tests approved by the NCAA. After purchasing these tests and receiving permission from the University Health and Safety committee, local student-athletes were allowed to voluntarily come back to campus in late June. Since then, the Athletics department has conducted over a thousand tests of over 400 unique student-athletes, and have found nine positive cases — a 0.008% positivity rate.

“They were trying to put together a return-to-school plan, and Athletics was a little bit ahead because we were bringing back athletes before the general student population,” Reiff said. “So, our testing process got out ahead of the university, but we just sort of stayed on separate but parallel paths, really until two weeks ago.”

Reiff said this decision was made primarily because the NCAA changed their stance on antigen tests. Before, the NCAA, who Reiff said are basing their decisions on science, regarded the PCR tests as a better test by the smallest of margins, because they gave out fewer false-positives and false-negatives. After the NCAA softened their stance on the antigen test, Reiff talked to director of Health Services Rhonda Jackson, and they decided that it would be best if Butler Athletics joined into the university testing process.

Shortly after this merger, an outbreak was detected. Multiple tests came back positive on the men’s soccer team, and the entire team and staff had to quarantine. No staff tested positive, but multiple players did, and subsequently had to quarantine in Ross Hall for two weeks.

When he contracted COVID-19, Haywood felt typical symptoms, such as congestion, a sore throat and fatigue.

“We live in a world at the minute, that everything that you do has a consequence,” Haywood said. “This is not to say that anyone was being irresponsible, but at this time it’s a crazy world we’re living in. Obviously it was disappointing, but we have to follow the rules. We knew what we were coming into this semester.”

Although he was “slightly frustrated” by the situation, Haywood tried to make the most of it by studying for a few upcoming exams, and talking to his friends and his family back home.

“Funny enough, my mom tested positive I think a day after I did,” Haywood said. “So we were in quarantine at the same time, 3,000 miles away. They’re all healthy now, so that’s good.”

Those on the men’s soccer team who didn’t test positive were allowed to return to practice last Thursday, but even though Haywood is out of quarantine, he still has to wait to practice.

“There’s a process for those who test positive that we have to go through,” Haywood explained. “We have to get our heart scanned and make sure that we haven’t suffered any problems because of COVID-19. So we have another week period before we’re allowed to practice.”

Haywood said that this experience is a wake-up call for the team if they want to continue to practice and eventually play.

“Something like this was going to happen, there was a very high probability,” Haywood said. “But we just have to be extra careful about who we’re hanging out with, and knowing whatever you do does have a consequence.”