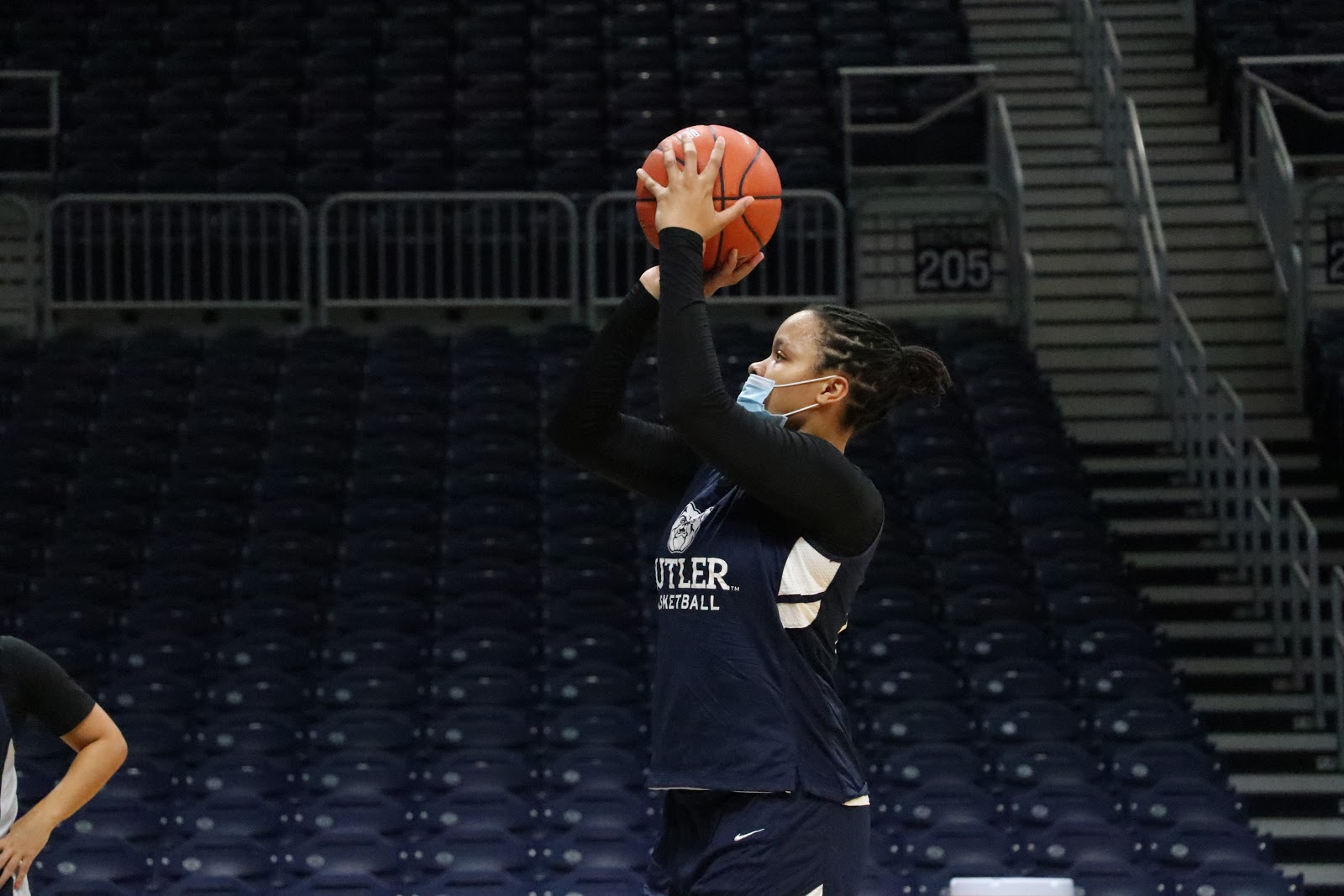 Butler Women’s Basketball guard Jaia Alexander attempts a jumpshot in practice this year. Alexander is returning this season from a leg injury that kept her out of play last season. Photo by Blake von der Lippe.

Jaia Alexander went up for a rebound during practice in mid-July of 2019. After Alexander came down hard on her knee, she continued playing on her injury for the next two to three weeks, not realizing how drastic the injury was.

Then, she found her knee swelling up. She described the aftermath of the injury as a “pothole” in her femur bone. After this realization, she underwent microfracture surgery.

Alexander went through a rehab process with Kelly Luse, the Butler women’s basketball associate athletic trainer. Every day for the first three months, she worked to regain her range of motion, mainly through stability exercises.

Alexander has yet to see any playing time in Hinkle, as she redshirted her first year at Butler and was injured during all of the 2019-2020 season.

“It is hard not playing the game you love for that long,” Luse said.

After two years of playing at Clemson University, Alexander transferred to Butler. At Clemson, she averaged 9.3 points in 16 games her sophomore season. Alexander came to Butler because she fell in love with the feel and location of Indianapolis — where she quickly connected with Butler women’s basketball head coach Kurt Godlevske. Godlevske has become one of Alexander’s main mentors.

Last summer’s trip to Italy marked Alexander’s favorite moment on the team, as she and her teammates toured the colosseum, ate gelato and rode in a gondola.

Then came her injury — ending the elation she felt on the trip, but making her determined to rehabilitate and get back on the court.

“I want to push myself to a different level this year,” Alexander said.

Then came the COVID-19 pandemic. Eight months of work to get back on her feet allowed Alexander to start playing fully in team practice in March of last season — only weeks before the college basketball season was cancelled. By this time, she was healed and started more intense agility exercises.

Standing at 5-foot-11, Alexander leverages her height to her advantage —  grabbing nearly five rebounds a game at Clemson. For the same reason, Alexander is also a deft finisher.

For his part, Godlevske hopes Alexander, as well as other Bulldogs, can help fill the void of Kristen Spolyar, the leading scorer for the Bulldogs last season who recently graduated and currently plays overseas.

“She is a tremendous talent, [and] has a unique knack to score the basketball,” Godlevske said.

Although Alexander was named a team captain before the season, she realizes being a leader means more than dishing the ball to her teammates.

Alexander aims to share her experience — suffering through a major injury and transferring schools — with her teammates, specifically the three freshmen and two transfers.

“I want to be a leader for my teammates, especially when they need help,” Alexander said.

For Alexander, being sidelined for two years has left her craving to get back on the court.

“I can’t even put into words how excited I am to play,” Alexander said.