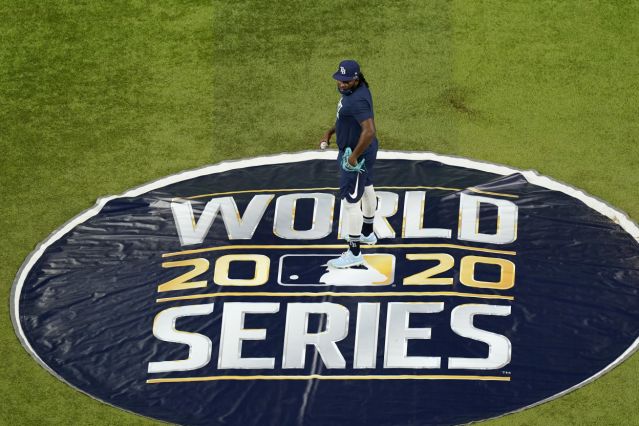 Tampa Bay Rays’ pitcher Diego Castillo warms up at Globe Life Field in Arlington Tex. in preparation for the World Series. The Rays will face the Dodgers in the Fall Classic. Photo by Yahoo! Sports.

The 2020 MLB season took the form of a shortened 60-game season in an experiment that saw MLB teams dodging COVID-19 throughout the late summer. In a year like no other, experts predicted crazy upsets and surprise teams in the Fall Classic. Instead, the two teams with the best records in baseball compete for the chance to be called World Champions.

These teams have found themselves in the World Series in the most opposite of ways. The Dodgers have the second-highest payroll while the Rays are third-lowest. Cody Bellinger and Clayton Kershaw make more money than the entire Rays roster combined. And yet, it will be the unsung heroes for the Dodgers that lead them to their first World Series since 1988. Down 2-1, Dustin May will pitch a two-hit gem through 7 innings to help the Dodgers tie up the series. Then, in a tight Game 7, May comes in relief and shuts down the Rays’ chance of finishing off their magical postseason run with a championship. The Dodgers have had too many opportunities to get the big one and the addition of Mookie Betts gets L.A. over the hump in 2020.

The Rays and Dodgers took two very different paths to reach the World Series. The Dodgers were on the verge of elimination, trailing the Atlanta Braves 3-1 in the NLCS. But the Dodgers rallied — winning three straight — including a decisive Game 7. The Rays found themselves up 3-0 in the ALCS and appeared to be set on making the second World Series appearance in franchise history. However, the Houston Astros won three straight games — tying the series 3-3. It seemed inevitable that Houston would win Game 7. Then the Rays rallied to a 4-2 victory behind a dominant performance from pitcher Charlie Morton to avoid blowing a 3-0 lead. In the World Series, the Dodgers will be seeking their seventh title in franchise history, while the Rays will be looking for their first. With stellar pitching from both teams, the series will go to seven games. Game 7 will be a pitcher’s duel, and the Rays will narrowly prevail over the Dodgers, winning the first title in franchise history while adding another chapter to the Dodgers’ recent postseason heartbreak.

This year, the World Series welcomes two teams with the best records in the regular season to face off for the Commissioner’s Trophy. The Rays are a small-market team looking to prove that enormous payrolls don’t necessarily win championships. These Rays are filled with an extremely underrated hitting core and an elite pitching staff, but their most valuable player has been rookie sensation Randy Arozarena. Similarly to the Rays, the Dodgers have had plenty of success recently, with this being their third World Series appearance in the last four years. This is due in part to Mookie Betts playing a key role in their stacked hitting core. If there’s any year for the Dodgers to end their championship drought since 1988, it will be this year. As for the World Series, the Dodgers will likely take Game 1, but the Rays will respond by winning the next two, thanks to their outstanding pitching performances. The Dodgers will return and tie the series at two. However, this will be the last win for the Dodgers, as the Rays will then take the next last two games and win their first title in franchise history.

The Los Angeles Dodgers take on the World Series for the third time in the past four years, and are hoping to finally bring it home to LA. They are playing the Tampa Bay Rays, and both teams went on very different paths to get to the series. The Dodgers held on by a thread and struggled a bit at the beginning of the NLCS, but kept fighting to make it to Game 7 and eliminate the Atlanta Braves. The Rays, on the other hand, were up 3-0 against the Houston Astros, but the Astros showed up to tie up the ALCS 3-3. The Rays came back and won Game 7 making it to their second World Series appearance. I think this will be a tough matchup since both teams are strong, but I do not think Tampa Bay will be able to outsmart Los Angeles with Cory Seager and Mookie Betts dominating on offense. The Dodgers seem to always find a way to make it to the World Series, and I think this will be the year that they will bring it home and win it all.

The Los Angeles Dodgers come into this series red hot after winning three straight elimination games against the Atlanta Braves. The Rays lost three straight elimination games to close out the ALCS before winning the series. The Dodgers are finally due to win a world championship. They’ve had great teams in the past play well in the playoffs, but this might be their best chance to take home a title. Mookie Betts, Corey Seager and Cody Bellinger look to carry the load on offense, but I think pitching is going to make or break them this series. Walker Buehler is the Dodgers’ ace and he has pitched gems this postseason. He has started four games in these playoffs with a 1.89 ERA. The Dodgers also have Dustin May, who has also been dealing this postseason with a 2.35 ERA over 5 games pitched. Last season, the Washington Nationals won the World Series relying on pitching, so that’s what I expect to happen again. If Walker Buehler pitches two games, expect him to win the World Series MVP.