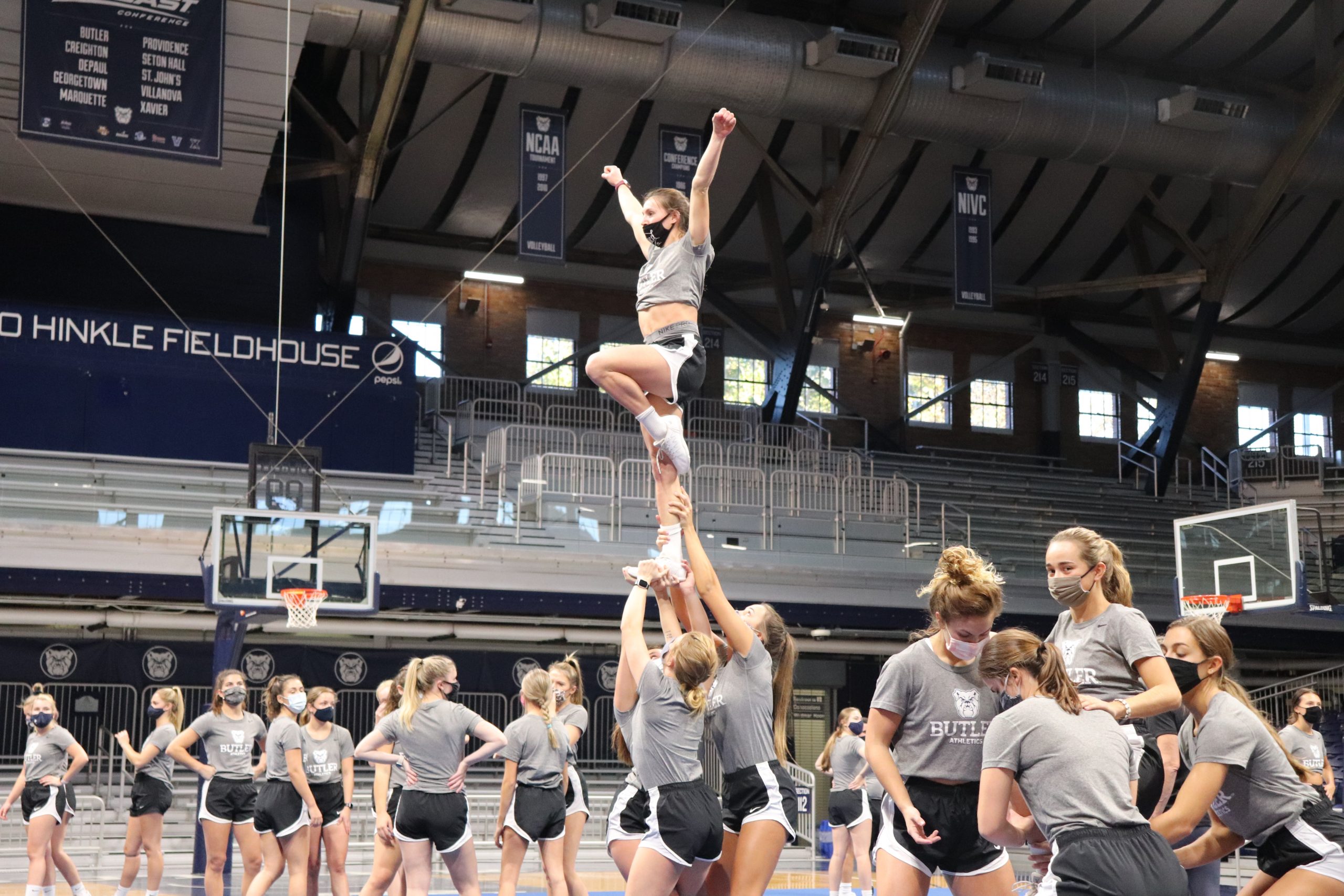 Butler Cheer team practices in masks while preparing for the uncertain sports seasons ahead. No sports have scheduled their returns as of Oct. 14. Photo by Ben Caylor.

With the college basketball season quickly approaching, the Butler cheer team has been hard at work getting ready for what will surely be an unusual season. Although the season is still up in the air, members of the team have remained committed to the program and prepared as if they’ll be ready to perform come the end of October.

Even with the team’s full dedication to getting through these strange times, it has not come without hurdles.

The new cheer season begins every year with tryouts in April, which give returning and new members — including incoming first-years — a chance to earn their spot on the team. Cheerleading head coach Brenda Jamerson said this year’s tryouts were different from past years, as the threat COVID-19 prevented students from staying on campus during tryouts.

“We had tryouts over Zoom in April and we weren’t able to meet any of our new members,”  Jamerson said. “There were about 14 people we didn’t meet until we got back to school in August.”

Due to the ongoing pandemic, the team was not able to hold its usual summer camp. In a normal year, the team spends a week in July at Eastern Tennessee State University — where they train in a cheerleading boot camp alongside other collegiate cheer programs — but this year, the camp was canceled.

On top of difficulties acclimating before the fall semester, several returning members found it somewhat challenging to get acquainted with their new teammates.

Addie Mann, a senior health sciences major, said there was an adjustment meeting everyone so late into the year.

“We tried to get to know people over GroupMe and virtually, but it’s not the same compared to when you’re in person putting names and faces together,” Mann said.

After months of delay and a two week shelter-in-place mandate from the university, the team was finally able to begin practicing routinely in September.

Jordan Bonenberger, a junior risk management and finance major, said the team is grateful to have the opportunity to practice — it’s been a big help in preparation for the season.

“We’re just enjoying being able to do throws and stunts and being together as a team safely,” Bonenberger said. “We’re getting a lot out of these practices and it’s made us better just over the last few weeks.”

The ability to practice, however, is a double-edged sword — the team has a strict time frame alongside newly-implemented COVID-19 guidelines.

Senior biochemistry major Rieser Wells said that in addition to the university’s policy on masks, the team has mandatory hand sanitizing between every break. Contact is also minimized during practice, which can lead to complications in performing routines and stunts.

“We’re really limited during practice, you can’t do any of the big group stunts and basket tosses,” Wells said. “We try to limit ourselves to our own groups. Co-ed groups consist of two people and all-girl groups are four. You can’t switch out partners too much due to [COVID-19].”

Bonenberger said if a member of the team were to get infected and brought it to the team in a full-scale practice, it would jeopardize the whole team’s ability to practice together. Working with partners enables the team to minimize the amount of members that need quarantined.

While the team will have to make do with the current circumstances, Mann said if COVID-19 cases decrease over time, they can expect to go back to unrestricted full stunts like in prior seasons.

As of now, the cheerleading team is still waiting on the university and the Big East to release its plans for the 2020-21 basketball season. Mann said the team is as in the dark about the decision as the general populace. The question remains whether the cheer team will be even allowed in Hinkle Fieldhouse on game days.

“We don’t have any idea what the fall is going to look like regarding fans, spectators, cheerleaders,” Mann said. “We just hope we’re in the gym in the fall for basketball and as well as other sports come the spring semester.”

The team also faces the loss of their yearly Thanksgiving weekend tournament. The tournament usually occurs in an exotic location — like the Bahamas or Maui — and is viewed as a reward for seniors for years of hard work and dedication to the program. Mann considers it to be a necessary sacrifice, however unsavory.

On Oct. 6, IndyStar confirmed the Bulldogs are pulling out of the Fort Myers Tip-Off, which was also originally going to feature Colorado, South Florida and Wisconsin.

In addition to the lost Thanksgiving tournament, the question of whether or not the team will be able to travel to events like the Crossroads Classic in December or the Big East Tournament in March remains unanswered.

On top of all of the challenges this program might face this season, the difficulty may lie most in balancing basketball with spring sports. With football now being played in the spring season, this could create conflict on when the team is available to cheer at games.

In the fall, the team would be able to cheer for both programs’ home games on the same day. Now with football running right through the Big East and March Madness tournaments, this could ensue scheduling conflicts for the cheer program.

Mann said that this is an unprecedented issue and is something that the team and the athletic department will have to play by ear when the time comes.

The football season being moved to spring also throws a wrench into the team’s natural progression of fine-tuning. The team uses the season to prepare for basketball season, where the most eyes are upon them.

While the program will have to work double time to perfect their performances, Wells sees it as a challenge that will benefit the team in the long run.

“The most pressure is always on us during basketball season when we’re on live TV,” Wells said. “So it’ll be nice by the time we get to football season we’re gonna be in great shape and at our best.”

Both Mann and Wells said they’re just grateful for the opportunity to be able to have the one last go-around with the program they’ve been a part of since arriving at Butler.

As seniors and respected leaders of the team, it goes without saying that their leadership will be counted on by the younger members of the squad. Wells said at the end of the day their biggest job is helping the program continue to develop towards a prosperous future.

“Even if we don’t get to do all our stuff, our goal is to make the team better than when we got here,” Wells said. “So as long as we can help the younger members learn something, that is our biggest goal.”