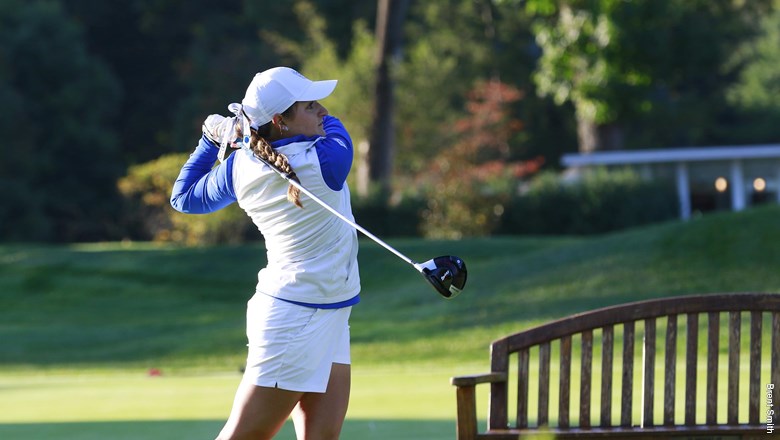 Ally Ross hits a shot during a tournament last season. Ross was in the hunt for tournament titles in the fall season before COVID-19. Collegian file photo.

On Mar. 13, 2020, the Butler women’s golf team finished up competing in the Ladycat Invitational over its annual Spring Break trip. The team finished eighth out of a 12-team field. The tournament is noteworthy because 215 days later, there still have been no games, matches or meets for Butler athletics teams due to the COVID-19 pandemic.

With all of that time off, Butler fans are missing watching their favorite Bulldogs compete in high-level competition. Here are 10 student-athletes to watch for when play resumes.

While all team activity has been cancelled due to the global pandemic, Butler cross country’s Simon Bedard has been keeping busy by competing overseas in the French National Championships. Bedard finished sixth at the meet and was half a second away from breaking the 14-minute mark for a 5K. In 2019, the French native qualified for the NCAA Championships in his first season with Butler since transferring from California Baptist.

In 2019, Wilmer Cabrera Jr. was named the Big East Freshman of the Year and All-Big East second team. Cabrera, whose father is head coach of the Montreal Impact of Major League Soccer, scored six game-winning goals for the Bulldogs, good for most in the Big East and fourth-most nationally. If the men’s soccer team is hoping to make it back to the NCAA Tournament when their season resumes, they are going to look to Cabrera yet again in the big moments.

As a redshirt sophomore in 2019, Melody Davidson led the Big East in 134 blocks to go along with 215 kills. As consistent as she could be for the Bulldogs, Davidson played in all 115 sets for the team as an underclasswoman. After being named to an All-Big East team at the end of 2019, Davidson is poised to be the leader of the Butler volleyball team for the next two years.

As a freshman in 2018, Lauren Fey stepped into the Butler softball lineup and immediately made an impact for the Bulldogs. Fey finished with a .308 batting average and was selected to an All-Big East second team. While it may be hard to believe, Fey was even better in her sophomore campaign. Fey led the team by batting .421 while scoring 18 runs for a Butler team that to an impressive 15-8 record before the cancellation of the season.

As Kamar Baldwin and Sean McDermott have left the Butler men’s basketball program, the team will look to upperclassmen to lead the young Bulldogs roster in 2020-2021. Along with fellow senior Aaron Thompson, the play of Bryce Nze will go a long way to determine Butler’s success this year, as the Bulldogs are losing over 50 percent of their scoring from a season ago. With more opportunities to be had, fans should look forward to what Nze can do in an expanded role.

The Butler football team has a host of quarterbacks it could go to as their starter when the season resumes, but Nick Orlando will be a player Bulldog fans will want to watch for regardless if he is the No. 1 QB or not. Orlando does it all — throwing, running and he even caught a pass this year. In his last game against Dayton, Orlando exploded for 158 yards and five touchdowns. Even if Orlando isn’t under center for the Bulldogs this year, his play will prove vital for Butler.

As a junior in the 2020 season before COVID-19, Ally Ross led the Bulldogs with a scoring average of just over 77. That was over a four-stroke improvement from her scoring average as a sophomore. Ross also had three straight top-3 finishes in the fall, proving she should be able to be in the thick of things to find an individual win in her upcoming senior campaign. With Ross as their leader when play resumes, Butler women’s golf should be a team to watch.

Connor Schultz broke out for head coach Dave Schrage and Butler baseball in his 2019 sophomore campaign with a 2.29 ERA across 78.2 innings, good for second-best in the Big East. His performance earned him All-Big East honors. Schultz largely backed up his breakout second season with 26 strikeouts and a 3.04 ERA in 2020 before the shutdown due to COVID-19. Schultz should continue his impressive play as the Friday starter when Butler baseball aims to resume in the spring.

Another Butler athlete that saw breakout success in their sophomore season was Katie Soderstom of Butler women’s soccer. The Carmel native co-led the Bulldogs with eight goals — three of which were game-winning — to go along with a team-high seven assists. Soderstom returns with experience as she started in all 19 games for the Bulldogs and was named to the All-Big East team. Look for Soderstom to continue her outstanding play when Butler resumes.

Of all of the newcomers to the Butler women’s basketball team, none could be argued to have more of an impact than Oumou Toure in her freshman season. Toure was named to the Big East All-Freshman Team after finishing second on the team with 9.1 points per game and 6.1 rebounds per game, while leading the Big East leader in steals with 2.3 per game. Look for Toure to play a big part in helping to replace Kristen Spolyar’s production in 2020.