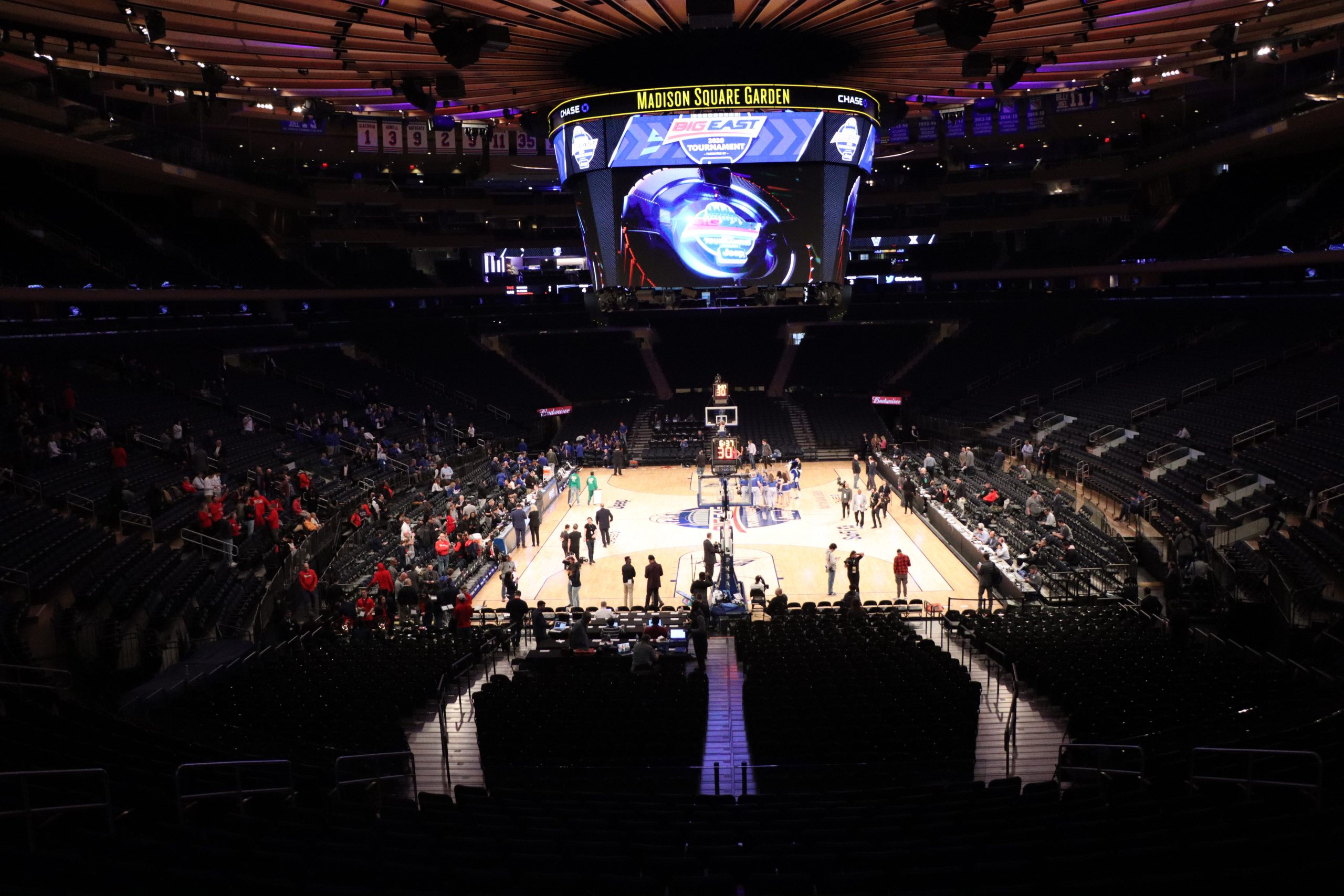 The last game of the Big East Tournament between Creighton and St. John’s was cancelled at halftime due to COVID-19. Photo by Xan Korman.

Just six months ago, I was in the heart of what many would consider the epicenter of the world — New York City — at the dawn of the “new normal” we continue to experience to this day. While my purpose for the trip was a journalism conference and basketball tournament, my memories from that trip will be much more significant than a game. These are my accounts.

I’ve seen the stereotypical American sights to see before you kick the bucket. I’ve peeped over the Grand Canyon, seen the Gateway Arch, been to a handful of Major League stadiums and more than my fair share of rest-stops in Florida.

But I will always be an Indy kid. I was born here, grew up no farther than a 30-minute drive from downtown, went to high school where you can hear the revving of the cars at the track, and finished the circuit by choosing to spend the first four years of my life away from mom and dad in — you guessed it — Indianapolis.

Hell, I have to grab onto the armrest in my plane seat because I’m still not used to that kind of travel. So, going on a trip to Manhattan was going to be a big experience for me.

After the first half of my spring break — visiting my grandparents who live in south Florida — my attention and excitement turned to the Big Apple. We’ve all seen it in movies a million times, but the thought of walking down the bustling city streets got me talking just a little bit faster.

As I landed in Newark, I bought my own train ticket to put me in the heart of the city, feeling like I already lived here and knew the ins and outs. As I walked up the steps out of Penn Station, the magnitude of the moment literally made me stop walking and look around.

The neck-bending skyscrapers, the honking yellow cabs, the fast-walking New Yorkers with a cup of coffee in one hand and a cell phone up to their ear in the other — it really was a scene from a movie.

As I headed toward my hotel, I wandered through Times Square with my suitcase in tow. The City that Never Sleeps seemed pretty spot-on. How could you, with the millions of LEDs and moving pictures?

I even got stopped to be asked if I wanted some guy’s “free” mixtape, just for him just to sign it in my name and hound me for donations. Ah, I really was in New York!

The battles between Ewing and Mullen, “Cardiac Kemba! UConn wins at the buzzer!” and so many more moments that will forever live in college basketball lore all took place in the World’s Most Famous Arena. And little old me was about to see it with my own eyes.

This year’s tournament was going to feature a plethora of talent and action — Villanova was the defending national champion, Creighton was arguably the hottest team in the country, Butler was at one point a top-five ranked team in the country.

That doesn’t even begin to mention two teams — Marquette and Seton Hall — that were led by first team AP All-Americans Markus Howard and Myles Powell, respectively.

As my group of college media journalists from the conference made our way over to the Garden, I was struck with awe for the entire 10-minute walk. As we entered the arena, we picked up our press passes, grabbed every media guide to every team in the Big East — because why not? — and made it up to the nosebleed press section.

While starting up my laptop and getting notebooks out for pre-game notes, I thought to myself, “I could get used to this.”

The opening game was between No. 8 Georgetown and No. 9 St. John’s. Normally, these play-in games are the most boring of the tournament, but I was eating this up.

St. John’s is less than 15 miles away from Madison Square Garden and is a historic rival with Georgetown, so the seats were filled with Red Storm fans cheering on their team.

It was a great game as St. John’s rattled off an unreal 23-0 run to turn a 10-point deficit into a seemingly-comfortable 13-point win. And there it was, my first Big East tournament game in the books. Just eight more in this glorious week and my heart would be satisfied.

What could go wrong?

COVID-19 has its first mention this far into the story because it had little impact in my mind about going on the trip or my safety along it. At this point in the year, COVID was seen as a looming threat, but nothing that seemed life-threatening or hostile to me personally.

As Xavier and DePaul made their way onto the court for game number two, I noticed that the atmosphere in the arena had changed drastically. For one, the New Yorkers had very little interest in staying for a game between two schools that were over nine hours away by car.

As the game progressed, I noticed an influx of Twitter notifications on my phone. What I saw on that phone would change that trip forever. Rudy Gobert had begun showing symptoms for COVID-19. The virus had penetrated the sports world.

As the news began spreading across the arena, a hush came over the crowd in waves. The impact this outbreak would have on both sports and American life as we knew it was beginning to set in for the thousands of fans in the stadium.

Later in the second half, I saw a video of Nebraska head coach Fred Hoiberg falling visibly ill on the sideline. While it was later determined his sickness was not COVID-related, I suddenly felt like I was starring in a supporting role in Matt Damon’s “Contagion.”

As I went to bed that night, I had very little idea what the next day would hold. I didn’t know if there would be college basketball again.

Upon waking, I did not see any news about the tournament being cancelled other than the fact that no fans would be allowed. There was a slate of four games to be played in The Garden that day, including my school’s team: the Butler Bulldogs.

As I arrived at the arena, MSG’s sheer size was only magnified by the lack of fans in the stands. St. John’s and Creighton took the floor as normal, but the attitude was definitely off.

As I walked down to the media break room to get some breakfast, I learned from the rolling TV that all other major conferences had cancelled their tournaments. As a matter of fact, by tipoff, St. John’s-Creighton was the only college basketball game in the country at the time.

Seeing the news of all the other conferences, I knew it would only be a matter of time before the Big East would fold too. Holding my breath for the inevitable, the public address announcer boomed over the cavernous Garden that the rest of the tournament was cancelled.

I had to take a moment to soak in the bizarreness of the moment. The only game in the country — one with no fans at all — just called it quits in the middle of the game. I wouldn’t see Butler play in the World’s Most Famous Arena. And I still had three more days in America’s biggest city at the dawn of a global pandemic.

While it has been six months since that experience, it seems both so recent and so far removed from the life we are forced to live today.

There have been no sold-out sports since then. None without masks or with players shaking hands after the game. The entire sports world shut down for over three months with the last memory being St. John’s and Creighton running into the halftime locker room.

In the weeks following the Big East tournament experience, I was given condolences by those I knew for missing out on the rest of that trip, for having to stay inside the hotel room instead of watching some of the best college basketball players in the country compete in the most recognizable arena in sports and entertainment.

However, my response is quite the opposite. As a small town kid with limited major sports experience, I was looking for memories of coming to New York for the first time that I would remember for the rest of my life.

While I thought it might be seeing a player hit a game-winning shot to win the title, it instead was seeing a completely-empty Madison Square Garden usher out its aisles at halftime.

At the beginning of the week, I was in a restaurant in Times Square where no open table could be found. By the end of the week, my group was one of two tables in the entire restaurant being used.

What happened around the world that week sent the country into a national lockdown for months. The sports world is just now getting back to some semblance of normalcy six months later. Our generation’s calling card will be how we made it through this pandemic, and stories like this one will leave future generations wondering what it was like. What could be more memorable?