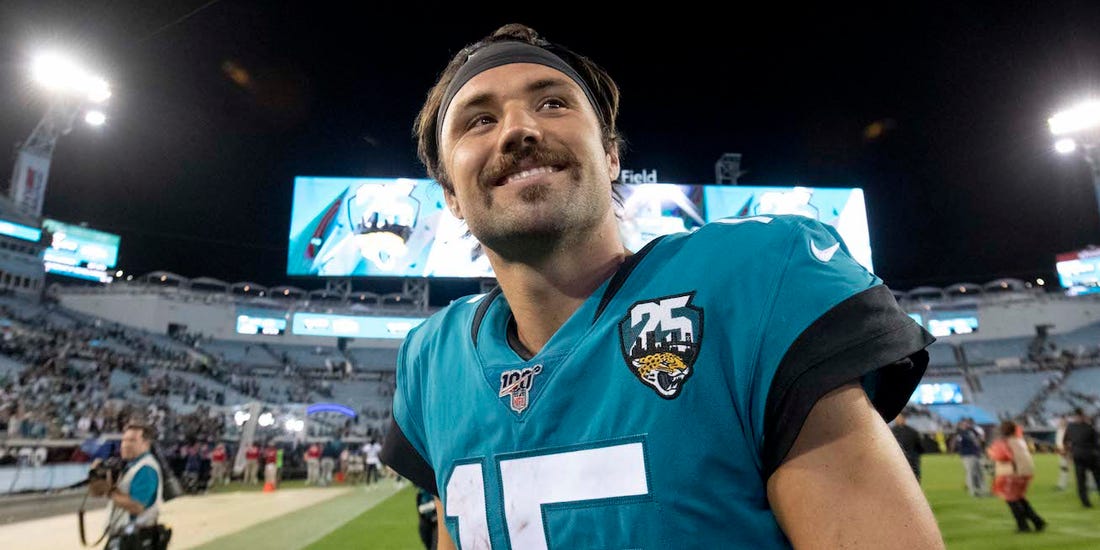 Gardner Minshew after a game last season. After a solid performance during week one, sports reporter Ethan Polak believes the Tennessee Titans defense will be able to slow down MInshew. Photo courtesy of Douglas DeFelice-USA TODAY Sports/Reuters.

Usually Week 1 is one of the hardest weeks in fantasy football because nobody knows how each player will look and how much they will be playing. This year, the pandemic didn’t help make picks any easier. Players had less time to practice, meaning it was harder for fantasy football participants to make decisions on which players to start and sit.

Now moving on to Week 2, we have a better idea on how each team’s lineup will include which direction certain teams are trending. This week consists of players with new injuries, new sleepers and more interesting matchups for each team. Those who had a rough start to their fantasy football season now have a chance to bounce back on track using this week’s fantasy football guide.

Here is a look into the key players for Week 2 that you should think about starting and sitting.

Jimmy Garoppolo, San Francisco 49ers. After a very disappointing performance against a young Arizona Cardinals team, Garoppolo will look to redeem himself against the New York Jets defense that got dusted by Buffalo Bills quarterback Josh Allen. The 49ers’ offense has been riddled with injuries to start the season with big names like Deebo Samuel and George Kittle being out. Although their status is not yet certain, head coach Kyle Shannahan is very creative with his gameplans which should mean that Garoppolo will have a better game. Keep an eye out for Garoppolo this Sunday.

Gardner Minshew, Jacksonville Jaguars. The Minshew Mania hype is back; however, it is about to come to a screeching halt. Last week, Minshew was able to defy all odds and not only beat the Colts, but have a record setting day with a 95% completion rate and three touchdown passes. While his performance was outstanding, fantasy players should be warned from jumping on the bandwagon too soon. The Jags now are going up against a Tennessee Titans defense that was able to hold the Denver Broncos new and upcoming offense to just 13 points. Minshew is a great quarterback to store in deeper fantasy leagues, but for this week, fantasy owners should stay away from him.

Jonathan Taylor, Indianapolis Colts. In Taylor’s first career game in the NFL, he put up promising numbers after starting running back Marlon Mack went down with a torn achilles. This is huge news for fantasy owners who have Taylor as he will likely see a major spike in snaps. Nykeem Hines will see more touches, but he will be mostly used in the passing game. Even though the Colts are going up against the Minnesota Vikings this week, Taylor is a must-start for this week.

David Johnson, Houston Texans. The other part of the DeAndre Hopkins trade had himself a decent day against the Kansas City Chiefs. After the Texans other running back Duke Johnson went down with an injury in the first half, David Johnson took advantage of the opportunity to run for 77 yards and a touchdown. However, this week, the Texans will be facing the other beast in the AFC in the Baltimore Ravens who have arguably one of the best defensive fronts in the league. It is Johnson’s goal to help prove why losing Hopkins wasn’t a mistake, but this week I would steer clear from Johnson.

Marquez Valdes-Scantling, Green Bay Packers. Last week, Aaron Rodgers looked like prime Rodgers as he lit up the Vikings secondary while Valdes-Scantling had 96 receiving yards and a touchdown on four receptions. Valdes-Scantling’s great game proves that the Packers are looking to get other receivers other than Davante Adams involved in the offense. This is huge news for the sleeper wide receiver who is destined for another breakout this week against the Detroit Lions and their weak secondary that let Mitchell Trubisky throw for 242 yards and three touchdowns. As long as Rodgers plays like he did last week, Valdes-Scantling will be a sleeper pick for fantasy lineups this week.

Robby Anderson, Carolina Panthers. After his four-year stay with the New York Jets, Anderson decided to sign with the Panthers. This week, Anderson made his debut where he stole the spotlight as the Panthers’ number one wide receiver putting up 116 yards and a touchdown on six receptions. While these stats are great, 75 yards and the touchdown came from one play. Anderson is a boom-or-bust player and since they are up against the Buccaneers stacked defense this week, Anderson is looking like he will be a bust.

Jared Cook, New Orleans Saints. Coming off a quality performance as the Saints’ leading receiver with five catches for 80 yards, Cook is looking to repeat that performance again on Monday. Cook had such a great game because star wide receiver Michael Thomas left the game with a high ankle sprain. Thomas is supposed to be out for the next few weeks meaning Cook will now receive even more targets. With the increase in targets and more favorable matchup against the Las Vegas Raiders, Cooks is a must-start this week.

Logan Thomas, Washington Football Team. The team without a mascot had arguably the biggest upset last week as they surprised everyone after coming back from being 17-0 to win the game 27-17 against the Philadelphia Eagles. This was due in part to the offense controlling the time of possession in the second half. This allowed players like Thomas to be able to step up and catch the only receiving touchdown for Washington that game. Despite Thomas looking like the next touchdown machine for Washington, they are going up against an Arizona Cardinals team that was able to slow 49ers All-Pro tight end George Kittle. Thomas has potential, but this week there are better matchups for other tight ends around the league.

Jason Myers, Seattle Seahawks. The Seahawks were scoring left and right against Atlanta this week allowing Myers to rack up five extra points and a 42-yard field goal. The Seahawks now go up against a New England Patriots team that held the Miami Dolphins to just 11 points. As long as quarterback Russell Wilson and crew continue to power through defenses, keep Myers in the starting lineup.

Chris Boswell, Pittsburgh Steelers. Last week, Boswell made two field goals as well as two of three extra points. This a satisfying performance for any kicker although this week the matchup is going to be a little bit tougher. The Steelers this week will be up against the Denver Broncos that held Derrick Henry and the Titans offense to just 16 points. Boswell is a great kicker, but there are plenty of other kickers this week that are destined for a better game.

Los Angeles Rams Defense. The Rams had an outstanding defensive performance as they were able to keep the high-flying Dallas Cowboys offense to only 17 points. Now, the Rams are going to be greeted by the Philadelphia Eagles offense who, in their first game, let up eight sacks to a young Washtington defensive line. Aaron Donald and company are going to have a field day this week against the Eagles banged up offensive line.

Los Angeles Chargers Defense. Compared to Los Angeles’s other team, the Chargers will have a tough task this week as they go up against reigning Super Bowl MVP Patrick Mahomes and the Kansas City Chiefs. The Chargers are coming off a game where they dodged a bullet against rookie Joe Burrow, who put up a fight against a defense that has the talent to shut offenses down. The Chargers defense is great, but keep them on your bench this week.