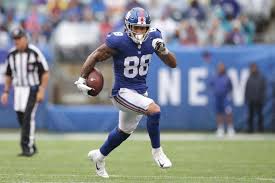 Evan Engram runs after a catch in a game last season. With the Steelers stingy defense this week, sports reporter Ethan Polak does not like starting Engram this week. Photo courtesy of Empire Sprots.

The last 221 football-less days are now behind us and it’s finally September. That can only mean one thing – football is back! It was a roller coaster ride of an offseason, but we have finally made it to the start of a new and very different season.

With fans stuck at home this year, more football fans will have no other choice other than to get more involved in a fantasy football league. Those still looking for last-minute fantasy football tips for their teams each week can use this weekly guide for tips to win their week.

Starting off with Week 1 where the drafts are finished, and ready or not, football will be here by this Sunday. Welcome to the 2020 NFL season.

Cam Newton, New England Patriots. Newton is joining a new team after being released by the Carolina Panthers and picked up two months later by head coach Bill Belichick and the Patriots. The former regular season MVP has so far fit into the offense very well and has already supplanted Jarret Stidham as the starting quarterback. Newton and Belichick seem to have sparked an early connection, which only means bad news for their opponents — especially given Miami’s young and unproven defense.

Baker Mayfield, Cleveland Browns. Cleveland continues to add more weapons and pieces to their offense like adding tight end Austin Hooper and other experienced offensive linemen to protect Mayfield. However, their success will have to wait at least a week as they are pitted against one of the top defenses in the Baltimore Ravens, with new additions like Calais Campbell from the Jacksonville Jaguars and Derek Wolfe from the Denver Broncos. The Ravens defense will prove too much for Cleveland’s high powered offense to handle this week, so make sure to stay away from Mayfield.

Raheem Mostert, San Francisco 49ers. After a devastating loss to the Kansas City Chiefs in Super Bowl LIV, head coach Kyle Shanahan and company are ready to make another push for the Lombardi trophy. Shannahan’s three-headed monster backfield is back, but with a new face in Jerrick McKinnon after Matt Brieda left for South Beach. Despite the new addition, Shanahan trusts the proven Mostert to be the main running back in their three-man system. The 49ers love to run the ball, so watch for Mostert to get plenty of touches and looks in the open field against the Arizona Cardinals’ weak defensive front.

Cam Akers, Los Angeles Rams. After a stellar season with Florida State University, the Rams decided to pick Akers with the 52nd overall pick in the 2020 NFL Draft. This decision comes after the Rams released Todd Gurley due to his lingering knee injury. Akers will be joined by Darrell Henderson Jr. and Malcom Brown in the backfield. On Monday, head coach Sean McVay said he had not chosen a starting running back for Week 1. This means Akers’s touches will be limited against a great Dallas Cowboys defense. Akers has promise, but this week he should stay on the bench.

Brandin Cooks, Houston Texans. Head coach Bill O’Brien has a plan for this season after trading away star wide receiver DeAndre Hopkins to the Arizona Cardinals, and then trading for Brandin Cooks from the Los Angeles Rams. Cooks now joins a team that has a major void in the receiving core and is looking for someone to step up. Cooks could very well be that guy as they go up against a Kansas City Chiefs team on Sept. 10 that is looking like it will be a shootout. Cooks could be a great Flex or even a WR2 this week.

Tyler Boyd, Cincinnati Bengals. With the first overall pick of Joe Burrow came a new era in Cincinnati. However, the Bengals are up against a Los Angeles Chargers team that has a loaded secondary. Plus, the Bengals have plenty of mouths to feed on offense as A.J. Green makes his return and John Ross is finally healthy. Be careful with starting Boyd this week.

Noah Fant, Denver Broncos. Denver has added plenty of new weapons to the offense that are poised for a breakout year. Given more opportunity — a full season instead of five games —  Drew Lock is destined for a breakout season. Lock and Fant had amazing chemistry last season, a trend that will continue in this season. Expect Fant to get plenty of receptions, as he will test the Tennessee Titans’ cornerbacks over the middle of the field.

Evan Engram, New York Giants. After an injury-riddled season, Engram returns to looking to prove himself once again as one of the top tight ends in the league. Engram, who recently had foot surgery, said he will be ready for the start of the 2020 season. However, we will see how he does against one of the top defenses in the league this year in the Pittsburgh Steelers. As long as safety Minkah Fitzpatrick is looming in the Steelers secondary, Engram is someone to stay clear of this week.

Joey Slye, Carolina Panthers. Slye is ready for another quality season. After setting the franchise record with eight 50+ yard field goals, Slye looks to hit more long field goals which means more points for fantasy owners. In a matchup against the Las Vegas Raiders this week, there will be plenty of opportunities for Slye to score some points as long as McCaffery gets going,

Mason Crosby, Green Bay Packers. The Packers visit the Minnesota Vikings this week in a game that is looking like it will be a low-scoring game. Minnesota lost many key pieces to their defense in free agency like Everson Griffen and Xavier Rhodes; however they were able to replace these pieces with young and upcoming talents in Yannick Ngakoue and Jeff Gladney With the new look in the Vikings defense it could mean trouble for the Packers. Less opportunities to move the ball then means less chances for Crosby to get involved in the offense. This week is not looking bright for the 36 year-old kicker.

Indianapolis Colts Defense. The Colts defense is loaded and ready to fire after new offseason additions like defensive tackle DeForest Buckner only make them stronger. Former Defensive Rookie of the Year, Darius Leonard, is also ready to try to repeat his outstanding season in his third year in the league. This defense has plenty of upside this week against a depleted offense in the Jacksonville Jaguars.

New Orleans Saints Defense. The Saints have an extremely challenging matchup this week as they go up against the Tampa Bay Buccaneers’ never-ending offensive talent. The Saints may have added new pieces to their defense like Malcolm Jenkins, but Tom Brady has too much talent around him that will wreak havoc. This is not the right week to be starting the Saints defense.