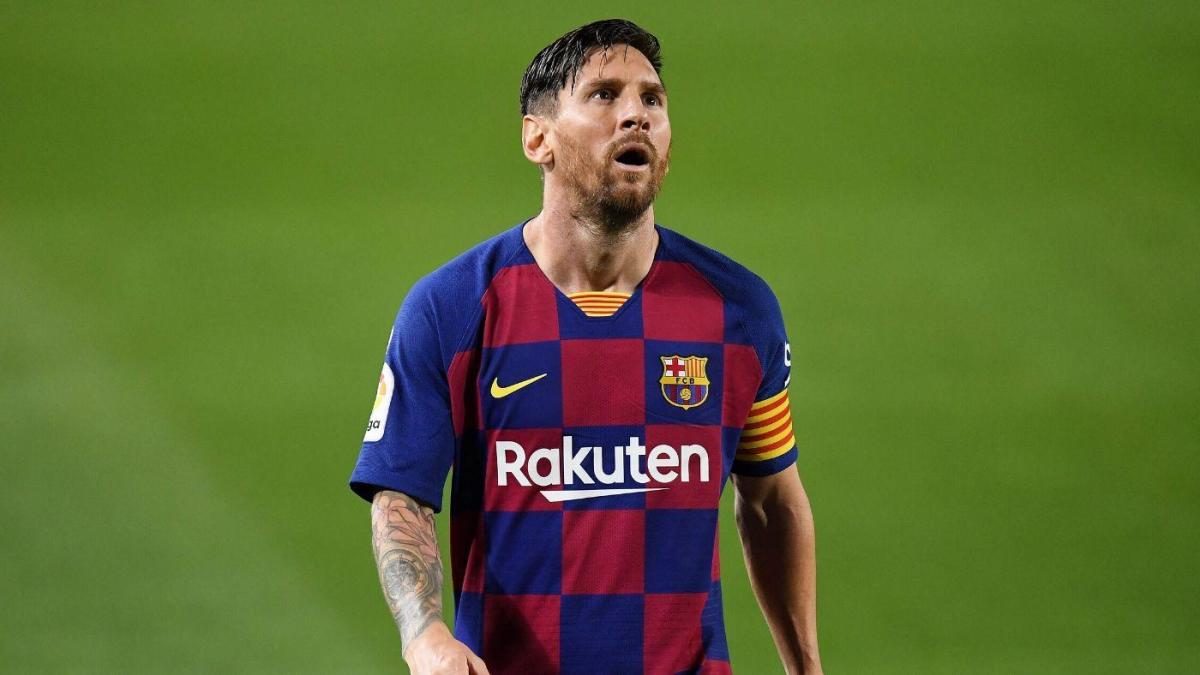 Lionel Messi plays in a game earlier this year for Barcelona. Messi’s contract situation with his club has been a major storyline in the soccer and sports world. Photo courtesy of CBS Sports.

FC Barcelona and their star forward Lionel Messi have one of the longest and most special relationships in the world of sports. At the age of 13, Messi moved from Argentina to attend Barcelona’s famous youth academy, La Masia.

Fast forward 20 years and 731 career goals, Messi is still at his boyhood club — and is arguably the best player in the world.

But, as glamorous as this partnership may seem, the past few years have been a roller coaster. It all came to a head when German champions Bayern Munich defeated Barcelona 8-2 in the Champions League semi-final on Aug. 14.

About a week after the most embarrassing loss of his career, Messi notified Barcelona that he wanted to forego the last season on his contract and move clubs on a free transfer.

Then, all hell broke loose.

Messi is not your average soccer player, or even just another superstar. Despite his small stature, Messi is undoubtedly one of the sports world’s largest icons.

The 33-year-old has the eighth most followed account on Instagram, and has not slowed down at breaking records during his two decade career. Since 2008, Messi has won the Ballon d’Or — an annual award given to the best player in Europe — a record six times and has finished second five times. In addition to his 731 career goals for club and country, he also has the most recorded assists in world football history with 306.

So, it is understandable that Barcelona wouldn’t want their greatest and most popular player of all time to leave — especially for free. And even though Messi asked to leave, Barcelona does not legally have to do that because he is still under contract.

Now, this is the part that gets ugly.

In 2017, Messi signed a four-year contract with Barcelona with an astronomical €700 million release clause — or $825 million. This means that any club that wanted to sign Messi before his contract expired would have to pay Barcelona €700 million.

It is not uncommon for huge clubs like Barcelona and Real Madrid to tag these unaffordable release clauses on contracts to hoard the best players and make it extremely difficult for them to leave. Although world soccer is an incredibly rich place, with oil tycoons, Middle Eastern princes and businessmen alike, no club has the ability to pay such an absurd fee.

Technically, Messi could have opted out of his contract’s final year, but the deadline to do so was June 10, after the season would have ended pre-pandemic.

In fact, La Liga, the Spanish league Barcelona plays in, didn’t return until after that date had passed, making it difficult for Messi to know if he wanted to leave without playing the season out.

Fabrizio Romano, the Adrian Wojnarowski of world soccer, has reported that Barcelona is holding strong onto the $700 million release clause and will not let Messi go for anything less. La Liga sided with the club, likely understanding how financially detrimental it would be if Messi left Spain.

This left Messi in quite the predicament. He told the entire world that he wanted to leave his club, and now the only way out would be through a nasty legal battle with the club he has loved for two decades.

That was too much for Messi, and on Sept. 4, in an exclusive interview with goal.com, he announced his decision to play out his final year at Barcelona. And he didn’t hold back when describing his feelings about the club.

“I told the club, to the president in particular, that I wanted to leave,” Messi said in the interview. “They knew this since the start of the past season. I told them during the last 12 months. But I will stay here because I don’t want a legal war.”

Messi also explained that Barcelona president Josep Bartomeu, didn’t keep his promise in regard to letting Messi leave, but, Messi’s problems with the club go beyond just the problems off the field. He did not hesitate to describe how he feels about the direction of the club.

“It does not come from the Bayern result, it comes from many things that have happened,” Messi said. “I always said I wanted to end here, and I always said I wanted to stay here. But also, that I wanted a winning project and to win titles with the club, to continue expanding the legend of Barcelona at the title level. And the truth is that there has not been any project or anything for a long time, they juggle and cover holes as things go by.”

Although Messi is speaking freely about Barcelona and the people who run it, he will still play at least one more season in his Barcelona shirt.

The question is, can Barcelona salvage its relationship with the world’s best player in the next nine months or will Messi take his talents to a new club to further expand his own legend? From Messi’s interview, it seems that his departure from the club is inevitable. And why shouldn’t it be?

Messi is taking the high road in this situation by not suing Barcelona to void his contract, and if everything he says is true, he would have a good chance of winning the case. But instead, Barcelona and La Liga saw an opportunity to profit off of one of the most marketable people in the world for one more year, so doing what is right was not in the playbook. Messi has given everything to this club, adding likely billions of dollars to Barcelona from his popularity and dominance both in Europe and in La Liga.

It is not Messi’s fault the season was postponed past the June 10 date because of COVID-19, and he should have been given the opportunity to leave at the end of the 2020 just like he would have if there was no pandemic.

Due to Barcelona’s selfish decision to not grant the transfer request of their greatest player ever, Messi shouldn’t even give them a chance for redemption. If I were Messi — that would be awesome — I would play the season out, score an obscene amount of goals like I always do, and then leave.

Messi deserves the opportunity to try a new challenge, to choose the situation that he feels he can best succeed in, rather than wasting the end of the prime years of one of the greatest athletes to ever live on an incompetent club. He deserves a club that won’t rely on his talent, but surround him with players who can match his brilliance, like Barcelona did a decade ago when they were truly great.

He deserves the opportunity to reunite with his former manager Pep Guardiola at Manchester City, or his friend and former teammate Neymar at PSG, or even his rival Christiano Ronaldo at Juventus. In short, he deserves the chance to choose where he plays, and I can’t wait to watch him wherever he goes.