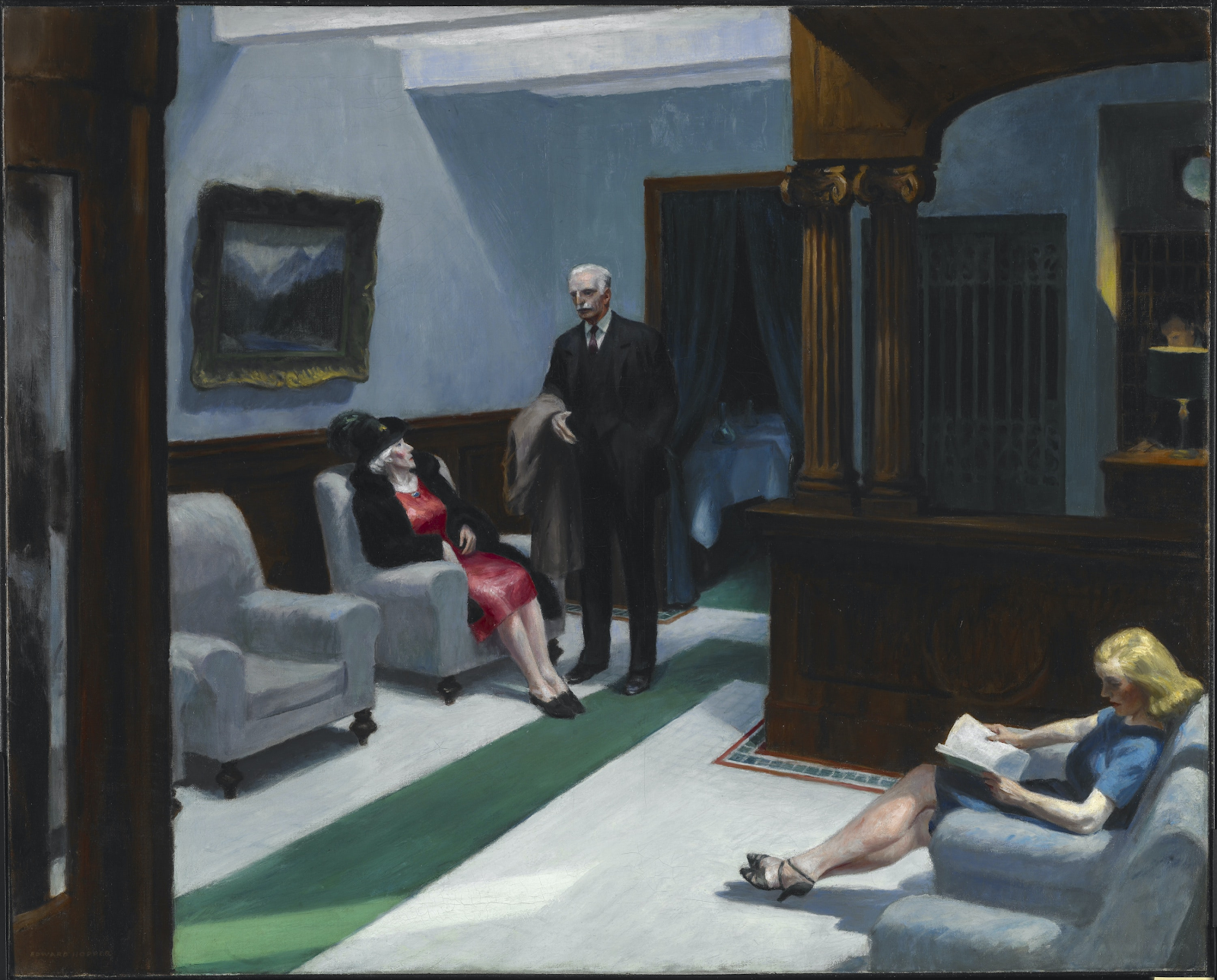 A special exhibit at Newfields titled “Edward Hopper and the American Hotel” that opened to the public on July 17, 2020 is currently available for Butler students to visit. The exhibit explores the culture surrounding American travel in the early to mid-20th century, a time period between the Great Depression and the 1950s in which automobile manufacturing was taking off and more people were taking trips across the country. “American Hotel” mainly focuses on the works of famed American painter Edward Hopper that depict hotels and lodgings he stayed at during his frequent cross-country travels.

The exhibit takes the viewer through sections with a variety of themes, from seaside lodgings to depictions of urban Mexico in the 1940s. The centerpiece of the exhibit is “Hotel Lobby”, a 1943 Hopper painting in Newfields’ permanent collection, but “American Hotel” also showcases pieces from other artists who either influenced Hopper’s style, depicted scenes of American travel or later drew on Hopper as an inspiration. Postcards, magazine covers and photography from the time period are displayed as well.

A large part of the exhibit focuses on Edward’s wife, Jo Hopper, with whom he went on all of his road trips. Jo gave up her own art career in order to manage her husband’s, even landing him his first exhibit, and was therefore unable to ever really gain relevance in the art world. However, the exhibit houses many of her letters and postcards from her and Edward’s travels, which shed light on the broader American travel art movement occurring at the time.

Art history professor Peter Wang is teaching a course that requires students to visit the exhibit and write a review. He points out that the exhibit is “about travel, but also about privilege” too.

“So thinking about African Americans, what about their travel experience?” Wang said. “It was segregated so that they have to check the green book so that they can actually find a safe place to check into a hotel. Something is missing, a different kind of road trip experience, and maybe we can be a little bit critical but also more inclusive about others’ experiences.”

It is important to note that Edward Hopper was not creating the work found in the exhibit in a vacuum. Anna Stein, assistant curator of works on paper at Newfields and the head curator of this exhibit, said that the thing she wanted most for people to take away from the exhibit was that Hopper “was working in his own cultural moment and making things that were just a product of the culture around him.”

There are also multiple interactive sections of the exhibit, including a postcard writing station that had to be adapted to make the experience cleaner and safer during the COVID-19 pandemic.

“We have space now where a sensor picks up when you’re there and you hear… the personal story that we originally wanted to be on a vintage phone that you picked up,” Stein said. “But we were like, ‘Nobody wants to pick up some phone and hold it up to their face right now.’”

Newfields faced similar challenges when it came to getting the pieces from Virginia — the first site of the traveling exhibit — to Indianapolis in the first place.

“There was a travel ban from Virginia, so we couldn’t even physically move the stuff from them to us across state lines,” Stein said.

Despite all these challenges, the exhibit manages to take on an unexpected degree of relevance during the pandemic. Wang pointed out that many Hopper paintings “depict that alienation, that kind of emptiness” that people can feel during times of quarantine and social distancing, along with the deep irony that comes with an exhibit centered around traveling at a time in which few people are taking trips.

Stein points out that some might find it offensive to compare a Hopper painting of a “person who was probably having a normal life” to our current, more serious situation. However, she argues that Hopper paintings are so subjective that the viewer is able to project their own feelings onto them.

“The thing with a Hopper painting is, he gives you an image that feels like a single scene in a larger story, but you don’t know what that larger story is, so you’re allowed to kind of fill in the narrative for yourself,” Stein said.

Some Butler students have been taking advantage of their free admission to Newfields and have visited the exhibit. Kynnedy Masheck, a junior anthropology and Spanish double major, enjoyed her time at “American Hotel.”

“It had the perfect amount of historical background and artwork. It wasn’t too much learning and reading and it had enough balance,” Masheck said.

“Edward Hopper and the American Hotel” is open until Oct. 25. Butler students get free membership to the museum but must register for a ticket before visiting, due to the pandemic. The membership also comes with perks such as discounted gift shop and café items. For those who do not feel comfortable visiting in person, a virtual tour is available on the Newfields website.