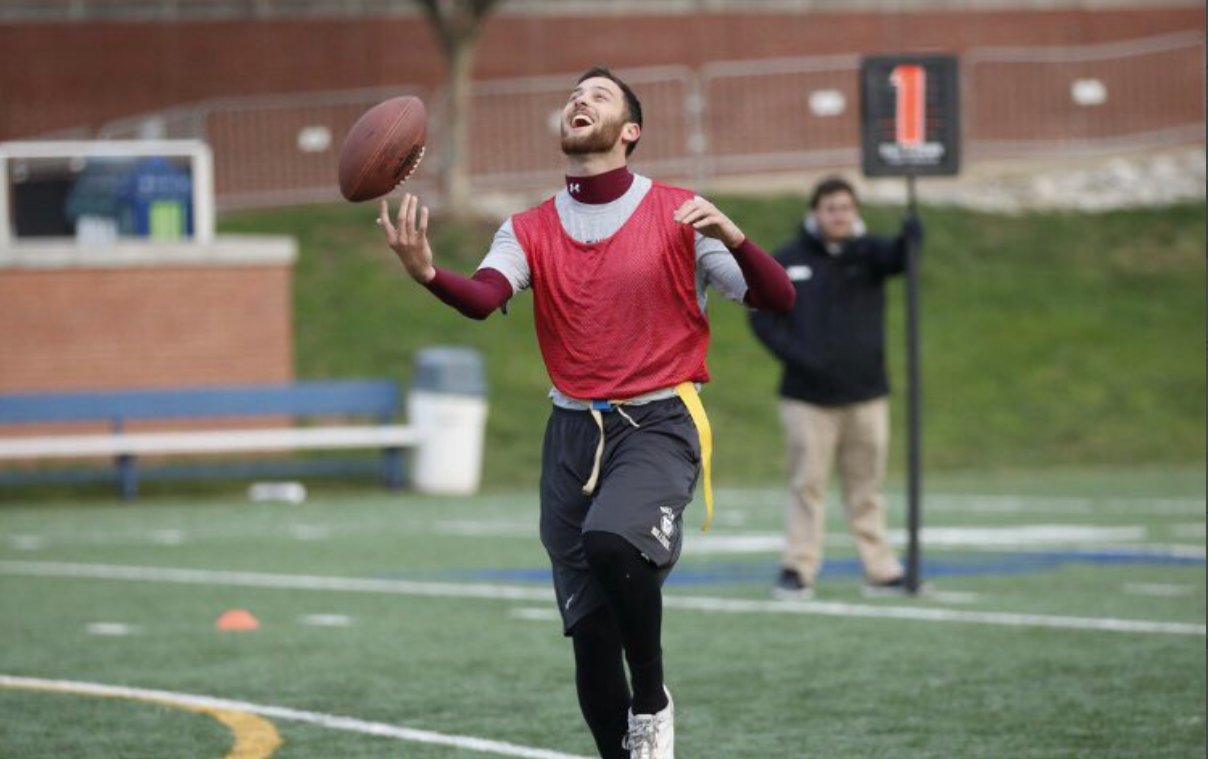 Student tosses up a ball in an intramural flag football game. BU Intramurals have had to make many changes in the face of COVID-19. Collegian file photo.

Year after year, intramurals at Butler University are one of the most popular activities for students to get involved in. From basketball to pool volleyball, the Health and Recreation Complex offers students an abundance of competitions that students can get involved in.

The decision to shut down all fall sports meant in-person intramurals were also shut down.

For Ryan Heumann, a junior mathematics and chemistry double major, his experience on the intramural football team was a formative part of his freshman year experience.

“The football team that I made with all my people in my dorm unit freshman year — most of those guys are still my friends today,” Heumann said. “It’s a great way to get out, meet new people and just have fun.”

As a direct result of the transition, events involving students coming within close contact of each other cannot continue until it is safe enough to do so. Bailey Finocchio, assistant director of recreation, wellness and club sports at the HRC, was prepared for the switch from in-person to virtual intramurals.

“When classes went virtual, it really propelled and boosted us to go virtual with some of our programming,” Finocchio said. “COVID-19 was what really got us to where we needed to be, but it was something we had wanted to do for a few months.”

Last spring, Butler experimented with virtual intramurals, but to no avail. While FIFA 20 and NBA 2K leagues were some of the first programs that were offered, and the most popular was Rocket League.

This year, however, the HRC thought creatively by organizing new intramurals for students and even faculty to get involved in. For their first half of the fall intramurals, the HRC will be offering Madden20 and Fortnite leagues. These leagues, though, require students to have access to a gaming console.

For anyone who does not have access to any of the games, the HRC is also hosting a NFL Pick ‘Em League. In this league, students will compete to see who can predict which NFL teams will win each week. Ryan Kaiser, a first-year computer science major, was glad to join this league.

“I can’t wait to compete against other students that never miss a Sunday just like I do,” Kaiser said. “If I try hard enough to, I might even win!”

The deadline for signing up for the leagues is Sept. 9. The HRC has more leagues in store for this semester: starting Sept. 23, students can sign up for Rocket League and FIFA 20 tournaments.

They are even offering virtual 5K races for anyone who is looking to stay fit while socially distancing. Each 5K will have its own separate league. The “Competitive” league is for experienced runners, the “Walking” league is for people in no rush and the “Casual” league is for everyone else. There is even a “K9” league for those who wanted to bring their dog along.

There are plenty of options that fit all interests for students to get involved and meet fellow students during this semester. As for the intramurals in the spring, there has been no update whether the university will be able to do in-person activities or not.

“We are planning for in-person as well as virtual intramurals, and what happens next depends on the state of Butler,” Finocchio said.