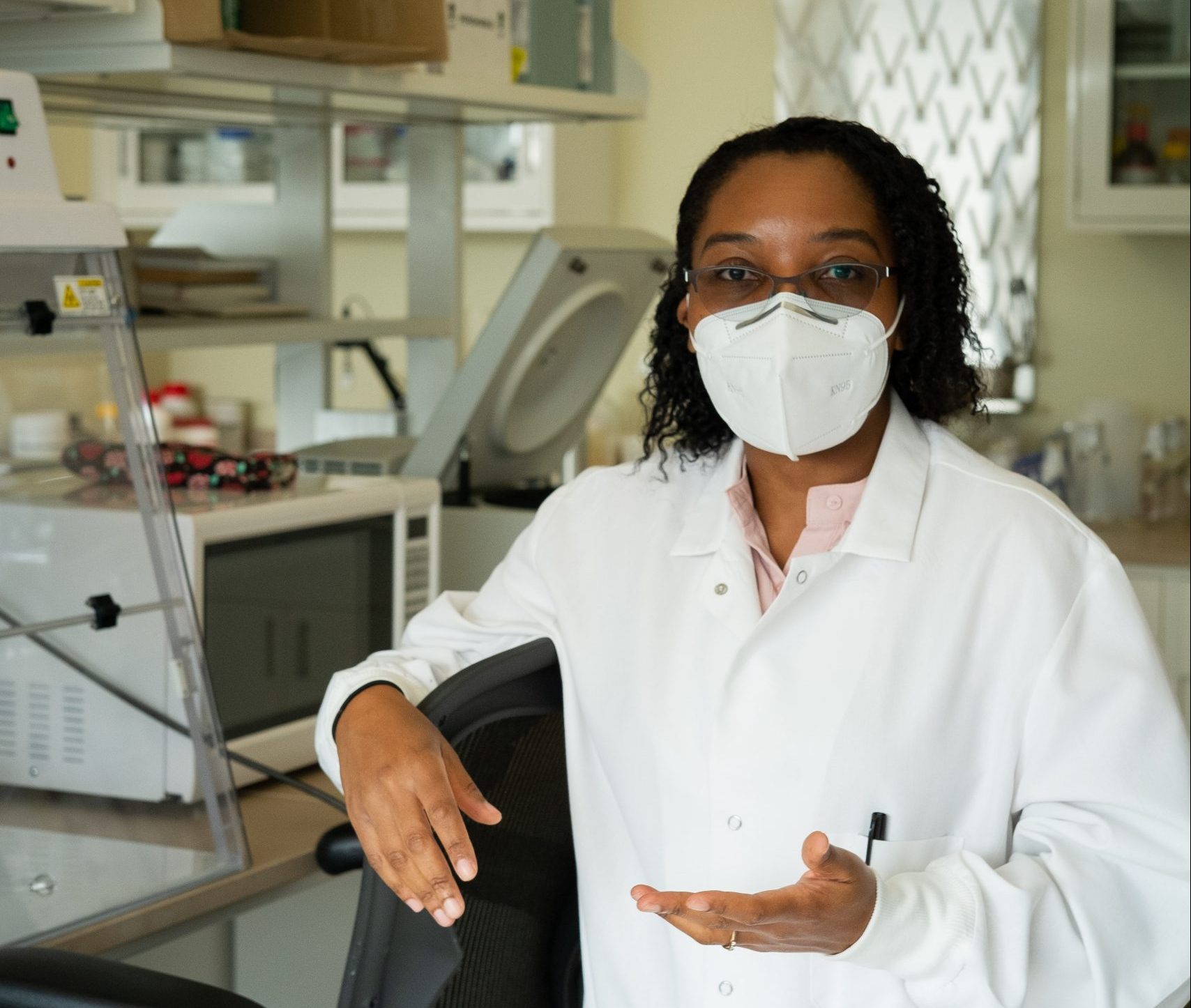 C. Patience Masamha will continue teaching as she conducts research on an aggressive form of cancer. Photo by Julian Cirnigliaro.

Chioniso Patience Masamha, an assistant professor of pharmacy, has a personal connection with Mantle Cell Lymphoma, or MCL. It was this very type of cancer that she suspects her own grandfather might have died from. Now, years later, she is preparing to commence her own research on MCL, with the help of a $1.39 million grant from the National Institutes of Health.

Masamha has been doing research since she was a student herself. While doing post-doctoral work, she read about the symptoms of MCL and noticed the similarities between it and the symptoms her grandfather experienced, which largely went ignored by doctors.

“I am originally from Zimbabwe, and I was a kid when my grandfather got sick,” Masamha said. “So he would go to the doctors and they would just be like, ‘Oh, this old man just wants attention.’”

Meanwhile, he was experiencing tiredness and pain in his bones, which Masamha suspects could have originated from his bone marrow.

“They didn’t really quite take him seriously, but it was really obvious to all of us that he was in a lot of pain,” Masamha said.

This sparked Masamha’s interest in finding out how MCL actually develops. Cyclin D1, a gene that initiates cell division, can sometimes be expressed for too long. When this happens, cell division can continue uncontrollably and cause some types of cancer, including MCL.

This process can result in the creation of fusion genes, which are hybrid genes formed when two previously independent genes fuse together. In her research, Masamha wants to use next-generation sequencing and bioinformatics to identify these fusion genes because they can sometimes be found before the disease develops. If identified, these fusion genes would essentially act as biomarkers, signaling that the person could soon develop the disease.

“So they would act as an early warning system of some sort so we could keep an eye on that person,” Masamha said.

For patients with MCL, this early warning could make a significant difference in their treatment. This cancer is often not diagnosed until it is in the later stages of development. However, the ability to identify signs of the disease sooner could allow doctors to intervene before the cancer spreads throughout the body.

Despite the potential impact of her research on the lives of MCL patients and their families, Masamha said she was surprised when she found out she got the grant.

“It was a very nice surprise, considering how the year has gone so far with COVID-19,” Masamha said.

It was less of a surprise to those who knew Masamha as a child. Even when she was young, Masamha was always interested in biology. Her high school did not offer a class dedicated specifically to biology. Nonetheless, she signed up for the biology exams and bought her own textbook. She ended up getting an “A”, despite being self-taught.

After coming to the United States, Masamha developed an interest in molecular biology. She ended up studying cancer while she was working on her master’s degree at Indiana University of Pennsylvania before eventually getting her doctorate at the University of Oklahoma.

Masamha attributes her academic success, as well as the success of her cousins, to their grandfather.

“I think he managed to nurture our dreams so we ended up fulfilling our potential,” Masamha said.

Masamha added that her grandfather left an impact on the people he met and made people believe that they could do anything in life. She recalled that people walked for miles in rural Zimbabwe just to attend his funeral and recount stories of him from decades earlier.

“He was just one of those people,” Masamha said. “I mean, he was not perfect, but he was kind of bigger than life so people remembered him. I don’t think I would be where I am now without his encouraging.”

Masamha is currently working on hiring a postdoctoral student to assist in the research, and she will eventually hire two Butler students to help as well.

Sophomore biochemistry major DeTonyeá Dickson said having opportunities for students to do research like this allows them to get hands-on experience in their fields of study.

“It’s a great opportunity to apply what you’re learning or what you know,” Dickson said.

Emma Lutes, a senior health science major, said that this particular research is especially interesting to her because it is an area that is at the forefront of medical research currently. Having learned about gene sequencing in her own classes, Lutes appreciated that the developing technology of gene sequencing could possibly have some practical and ethical applications for actual patients.

Lutes also said she believes navigating new technologies like this — which may have profound implications for society — could probably be done better at a multidisciplinary liberal arts school like Butler.