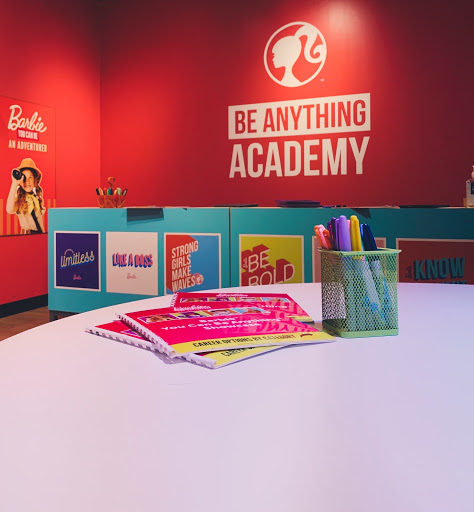 The “Barbie™ You Can Be Anything™: The Experience” Exhibit at the Indianapolis Children’s Museum encourages children to dream big.

2020 has proven that despite constant struggles, showing children their true potential is of the essence. Luckily, the exhibit “Barbie™ You Can Be Anything™: The Experience” at The Children’s Museum of Indianapolis does just that.

The exhibit, which opened on Aug. 1, will be showcased at the world’s largest children’s museum until spring 2021. Featuring 200 of Barbie’s™ careers through the decades, the exhibit allows young children to explore various professional paths through play.

From a remarkably young age, kids begin to idolize their parental figures, hoping to be like them one day. While this sense of admiration is certainly heartwarming, it can also be limiting in certain situations. When visiting “Barbie’s™ You Can Be Anything™: The Experience,” children are introduced to an array of female leaders ranging from pilots and mathematicians to jazz singers and gymnasts. With role models dating back to the 1960s, there are over 60 dolls of strong women on display.

Walking into the exhibit, viewers are greeted by the boss-lady behind it all: Ruth Handler. With female empowerment in mind, the creator of Barbie™ designed her brand to portray the endless possibilities within every young girl. Directly beneath Handler’s biography, the original Barbie™ doll is on display. The visualization of her first product is a testament to the entire exhibit: she believed she could, so she did.

Ruth Handler, the creator of Barbie, and the original Barbie doll are the first exhibits on display at the Barbie™ You Can Be Anything™: The Experience. Photo courtesy of Lea Jaffe.

“My whole philosophy of Barbie was that through the doll, the little girl could be anything she wanted to be,” Handler’s quote on the exhibit walls said. “Barbie always represented the fact that a woman has choices.”

As kids explore the exhibit, they are encouraged to investigate the five role types: a leader, a problem solver, a nurturer, a creator and an adventurer. Following a brief quiz within the exhibit, they are able to check out various professions tailored to their personal results. From harvesting honey as a beekeeper to completing code as a robotic engineer, the entire exhibit is designed as an interactive hands-on experience.

Speaking of a changed world, the museum has implemented a variety of safety precautions due to COVID-19. The exhibit will be closed for a 30-minute cleaning period at 12 and 2 p.m., as well as frequent sanitation of touchable elements. Sanitation stations scattered throughout the exhibit are available to visitors at all times. Both social distancing and mask-wearing are required at all times.

The exhibit, which is partnered with Mattel — the owner of Barbie™ — brings another important issue to light: “The Dream Gap.” According to Mattel, “The Dream Gap is what comes between girls and their full potential.”

According to The Dream Gap video, by the age of five, girls stop believing they can turn their dreams into a reality. To put an end to this statistic, “Barbie™ You Can Be Anything™: The Experience” has featured multiple strong female role models. The exhibit showcases the stories of women like Laurie Hernandez, Katherine Johnson, Ella Fitzgerald, Amelia Earhart and Florence Nightingale. The exhibit affirms the belief that the sooner we begin to highlight strong women doing great things, the sooner young girls will start believing in their true potential.

Micah Horne, owner of ASYM Clothing and a first-year strategic communication major at Butler University, was pleasantly surprised with how Barbie™ is utilizing their platform.

“It is a great opportunity for young girls to learn about their own hobbies, and see if they could turn them into a career,” Horne said.

Back in eighth grade, Horne herself decided to pursue a passion that eventually turned into much more.

“I had the idea that I wanted to create logos and put them on my own clothes,” Horne said.

At a young age, the CEO knew what she wanted. Although very difficult at times, she did not let anything get in her way.

While Barbie™ is currently putting in effort to inspire children, the company has also received their fair share of criticism in the past. Whether the house was too big or the doll was too skinny, the brand has been accused of depicting a false reality.

Sarah Myers, the traveling exhibits program manager for the museum, encourages people to focus on the message Barbie is trying to convey.

“We want people to focus on the future of Barbie, rather than the past” Myers said.

As shown throughout the exhibit, Handler wanted Barbie™ to inspire young girls from the very beginning. Whether it was using the dolls as a creative outlet or sparking imagination, the 11-inch plastic figures have truly changed our world.

Toward the back of the exhibit, the “Be Anything Academy” is open to children and their role models. Enclosed within the glass dome, visitors are invited to attend various showcases and workshops hosted by museum staff. With motivational quotes on the walls and career-oriented dolls placed upon shelves, kids are encouraged to think big and dream even bigger.

Christa Grimmer, an activity interpreter for the museum, has spent the past 11 years inspiring children’s imagination through immersive experiences. Passionate about the “You Can Be Anything™” exhibit, Grimmer explains the beauty that lies within the exhibit’s name.

“Encouraging people to discover who they were created to be and supporting them in that discovery, that’s what this exhibit is all about,” Grimmer said.

Open Tuesday through Sunday from 10 a.m. to 5 p.m., the exhibit is free with museum admission. Regardless of age, ethnicity, background or gender, “Barbie™ You Can Be Anything™: The Experience” wants visitors to acknowledge the limitless potential within each individual, and the generations of young women to come.