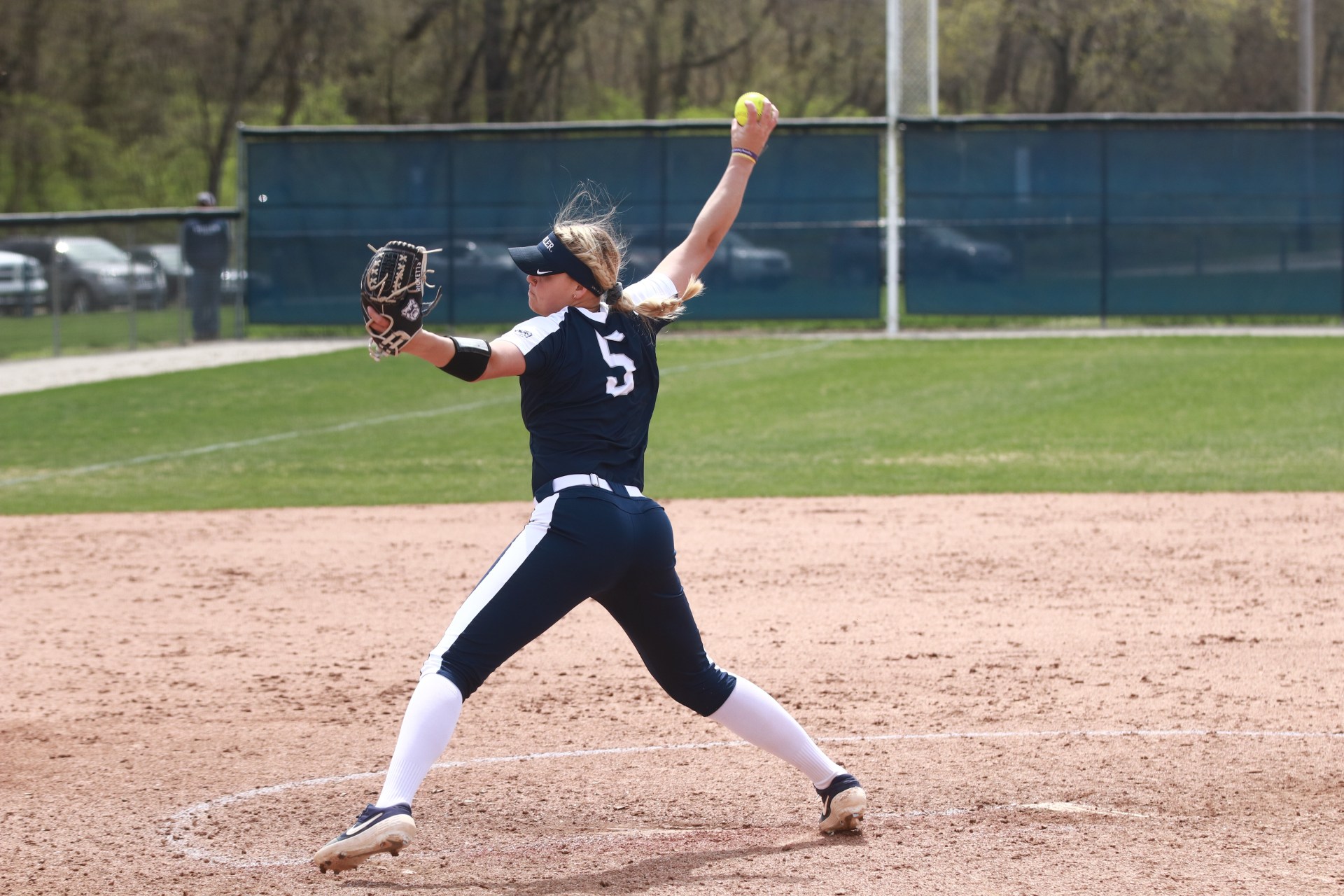 Karli Ricketts throws a pitch in a game last season. Butler softball saw their season cut short in the middle of the historic start to the season. Collegian file photo.

After a 16-32 overall record in 2019, the Butler softball team was ready to start with a clean slate. Throughout the offseason, head coach Scott Hall said the team challenged themselves to find a purpose and hit the “reset button.” And they succeeded.

“I think the leadership and the team as a whole just said ‘we’re willing to start over, put the team first and do whatever it takes to win,”’ Hall said.

All of the women on the team came to an agreement to put in the extra time and work to build a team bond. Average wasn’t good enough anymore. The team was ready to show who Butler softball really is, this time with the mindset of competing as “one.”

Senior infielder Claire Gilliland hit two homeruns — including a grand slam against Princeton — and recorded 11 runs batted in during the 2019 season.

“The team does a really good job on understanding why someone else may be playing over them,” Gilliland said. “As long as the team is succeeding, then I’m happy with my role.”

The team mantra became “ten toes,” which meant they will always be behind one another, just like the ten toes of someone standing right behind you.

The new team mindset was flourishing as they kicked off the 2020 spring season 4-1 in their first tournament. Things seemed to be paying off — just before the abrupt, COVID-induced ending of the season, that is. They finished 15-8 overall, just one win away from their total wins the previous season. They still had at least 35 games left on their schedule.

Over spring break, the team traveled to Florida and had played in two out of the 10 games scheduled on their trip. The next day was an off day spent at the beach. As they began to scroll through their Twitter feeds, a relaxing day off at the beach quickly devolved into the day their promising season skidded to an immediate halt.

The cancellation of the Ivy League’s seasons followed by other large conferences foreshadowed Butler’s fate. Gilliland realized that it wasn’t a matter of if their season would be cancelled anymore — it was a matter of when and how the team would find out.

“We actually found out by the Butler Athletics or Big East Twitter, when they put out a general statement that our championships were cancelled,” Gilliland said.

Madi Christiansen, a fifth-year first baseman, showed optimism even when her coach did not see how the NCAA could pull off allowing athletes to return for another season.

“The team was definitely really, really sad,” Christiansen said. “I would say for me, especially it being my senior year, that I was kind of overwhelmed and just didn’t know what to think of it because everything ended so quickly. I was obviously disappointed, but I was like ‘there has to be something else, this is not the end.’”

Soon enough, Christiansen realized this was not the end. Once she found out she could return for her final season — as other seniors were — her decision was made.

“I think my biggest driving factor was the chemistry of our team,” Christiansen said. “Even with the unknown of this year, if we don’t get to play, I don’t regret coming back. I would do anything with this team and I get to spend time with everyone still.”

Four of the six seniors have chosen to return for their final season, as the other two were ready to move on to the next chapter in their lives after both getting engaged. With four returning graduates and four incoming first-years, the team’s roster may be larger than last season, but it also has more depth.

“You know [this season’s success] started a snowball,” Hall said. “Winning creates a fun culture. When things aren’t going well, you are always trying to figure out why. But when things are winning you want to keep winning, so you keep doing what is working.”

Despite the pandemic, the biggest takeaway of the 2020 season was how well the team was playing and the chemistry of the new and improved team.

“At the time, we were ranked first in conference.” Christiansen said. “Granted, that was before we played a single conference game, but we were meshing really well and playing really well. We always joke around and say ‘oh, Big East Champions 2020,’ even though no one actually was.”

While Butler’s campus was closed for two weeks, the team was barred from in-person activities, which prevented them from practicing at Hinkle Fieldhouse and other facilities. Now, since the team is allowed to practice, they have anywhere from eight to 20 hour practice weeks, depending on the week.

“It is really easy, especially in our 20 hour weeks with softball, to say ‘I’m tired of this’ and ‘I don’t want to go,’” Christiansen said. “But after this, I will definitely have a different outlook and may say I don’t want to go, but at least I’m not stuck in the house right now.”

Christiansen pointed out that their coaches are very adamant on following campus procedures to make sure the team can get back to practices and workouts as soon as possible.

“As athletes, as coaches, we just want to be competing, practicing and working towards something and it is just hard not to,” Hall said. “Everything we have been doing is to make sure we get the chance to again.”