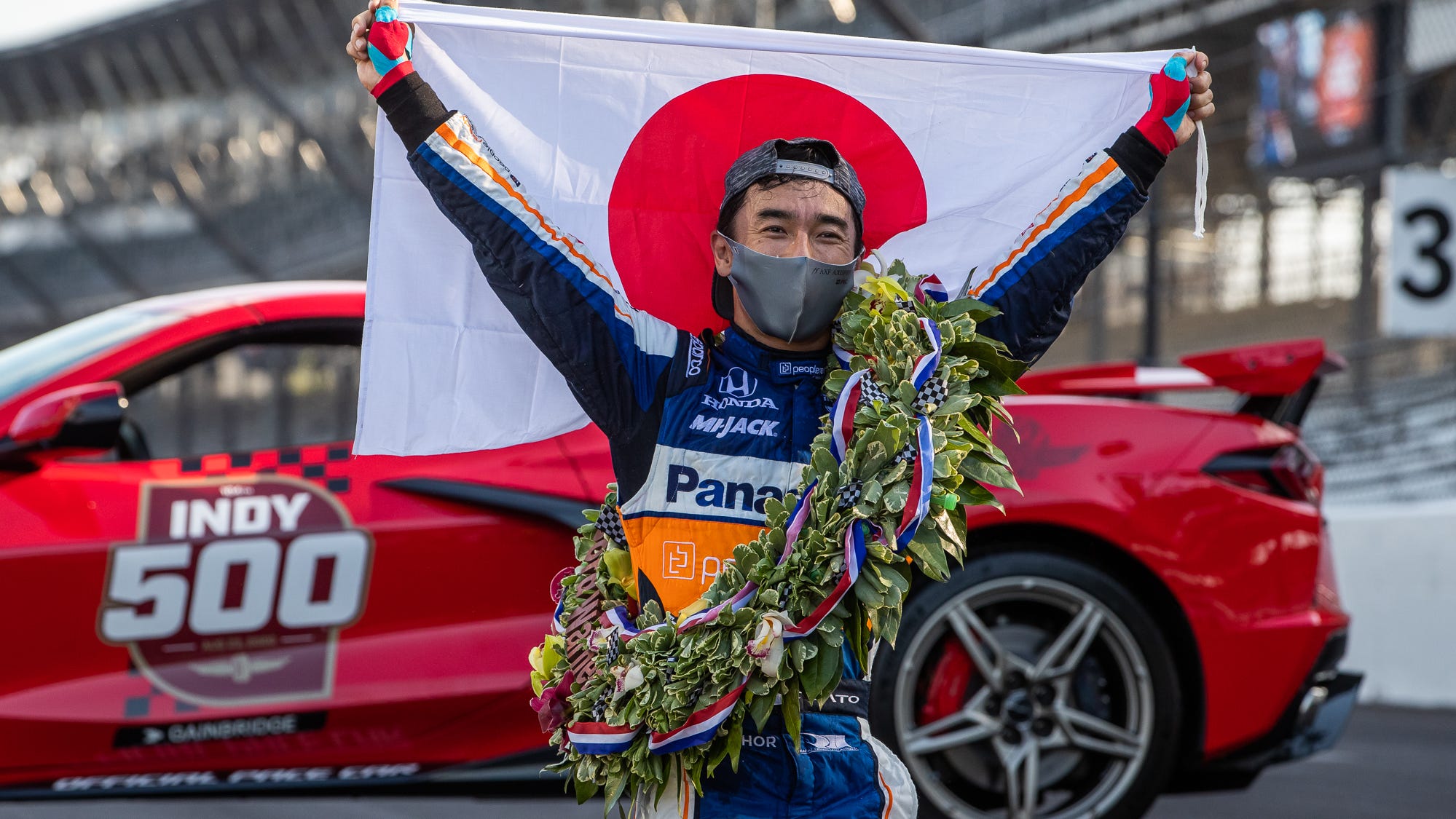 Japansese-born Takuma Soto celebrates after winning the 104th running of the Indianapolis 500 on Sunday. The race was without fans for the first time in its illustrious history. Photo courtesy of IndyStar.

Just as the sun peeks over the horizon, racing fans from around the state and beyond have already begun to gather outside the famed Indianapolis Motor Speedway. In a blink of an eye, the parking lots fill as fans line up along the streets outside to watch their favorite racers drive by in brand new turbo cars.

Soon enough, it is time to head into the 300,000-seat venue to get ready for the race. The words “Back Home Again In Indiana” echo around the stadium as jets come surging by. The 33 turbo cars line up three-wide as they drive at a steady pace until the green flag begins to wave — and they’re off.

Cars zoom in and out, going up to 240 miles per hour until the white flag waves, signalling the final lap. The crowd drowns out the noise of the cars once the car in the lead crosses the long, checkered brick finish line. The champion and their crew then head to the trophy presentation to lift the trophy and drench themselves in ice-cold milk.

For the first time ever, the Indy 500 was fanless.

The decision to proceed without fans was met with mixed emotions throughout the Indianapolis community. Phil Riley, season ticket holder at the Indy 500 since 1982, took a positive approach to the race being held online.

“This year, it was actually okay for me to take a year off,” Riley, a Westfield resident, said. “I’ve had 50 years dealing with traffic, so this year in a way was kind of a little respite.”

This was only the third time Riley had missed a race in person since he began attending the race since 1969.

Riley wasn’t the only fan to actually enjoy the online experience, because this year, organizers introduced a new trend called the “Message in a Milk Bottle.” The 33 drivers and thousands of fans around the world joined together before the race to fill out a message with what the Indy 500 meant to them and put them into milk bottles.

The bottles will remain unopened until next year’s Indy 500. The racing community took this by storm by filling out thousands of letters. Drew Westland, a first-year sports media major, was thrilled by the time capsule idea.

“I think this is a great way to bring the whole racing community together,” Westland said. “Who knows, this just might become a new tradition.”

Despite all the love for this year’s Indy 500, there were also some drawbacks. Michael Kaltenmark, public relations and marketing coordinator for teams in the Indy 500 since 2005, was excited to see that race would still go on. At the same time, he was worried about how the Indianapolis community would fare.

“[The Indy 500] is the crown jewel of central Indiana,” Kaltenmark said. “Although, the economic and civic engagement is significantly lower than it normally would be for this race, so that hurts.”

According to a study done by the Indianapolis Motor Speedway, the city’s economy will lose out on up to $336 million. With no fans eating food and buying all the souvenirs they can afford, the Indianapolis economy is going to take a major hit.

Nonetheless, the race was completed with Takuma Sato taking home his second Indy 500 win over favorite Scott Dixon while in a caution lap. While the finish wasn’t as entertaining as some hoped, the Indy 500 hopes to have the race back in person next year so the fans can continue their traditions at the “Greatest Spectacle of Racing.”