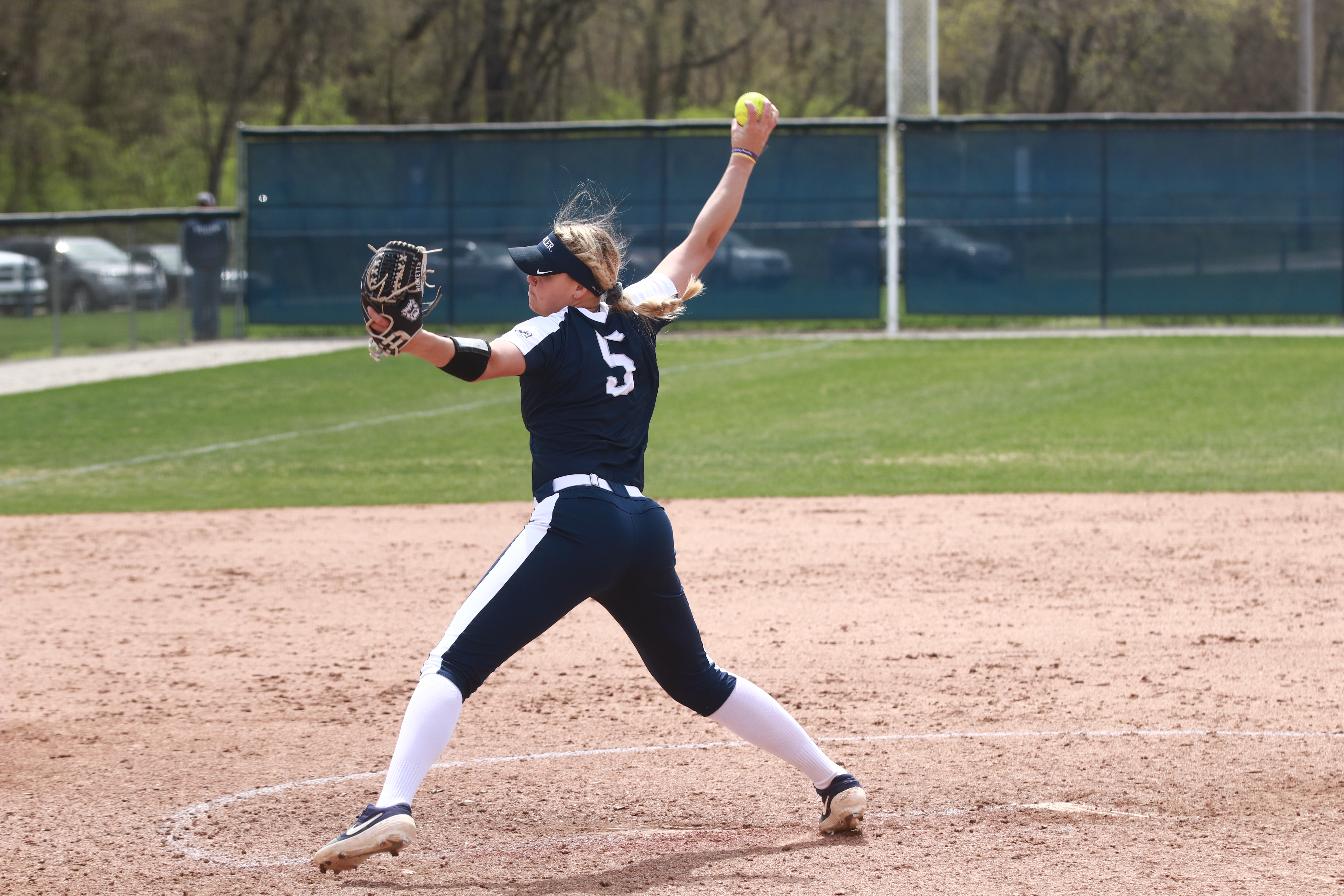 Karli Ricketts throws a pitch during a game last season. Ricketts hit her fifth and sixth home runs of the season at the Liberty Classic. Collegian file photo.

The Butler softball team posted its third consecutive winning weekend after a 4-1 stretch at the Liberty Classic. Butler picked up wins over Hofstra, Yale, East Carolina and Fairfield to improve to 12-4 on the year. Here’s what we learned:

Butler’s pitching staff was nothing short of dominant this weekend in Virginia. The Bulldog’s four pitchers combined for a 0.82 ERA across 34.0 innings of work. Butler allowed just four earned runs and struck out 46 batters.

The Bulldogs’ pitching depth reared its head yet again this weekend as Alyssa Graves, Karli Ricketts, Mack Griman and Madison Seigworth all stood tall in the circle. Even in Butler’s lone loss of the weekend their pitching was stellar. Ricketts threw a 2-hit, 11 strikeout performance as Butler fell 1-0 to Penn on Friday.

Graves struck out a combined 21 batters in her two complete-game performances. Ricketts allowed just one earned run across 9 innings.

Lost in the shuffle is Griman, who’s 1.14 ERA coming into the weekend led the Big East. The freshman had only pitched 12 innings before she got the nod against Yale on Saturday. She stepped up and threw a complete-game shutout for Butler in a 4-0 win. It was the longest outing of Griman’s career so far.

Butler’s team ERA of 2.37 was the 57th lowest in DI softball heading into this weekend. That mark has since been trimmed to 1.91 after the completion of this weekend. A 1.91 ERA would have ranked 33rd according to last week’s NCAA statistics — the NCAA will update their stats on Monday.

2. Maddie Moore may have found her rhythm at the plate

Butler had jumped out to an 8-3 record without huge production at the plate from Maddie Moore, arguably it’s second best hitter. Moore was hitting just .156 heading into the Liberty Classic this weekend. The shortstop still had started every game and has been a key cog in Butler’s .984 fielding percentage, which ranked 6th in DI softball before the weekend.

But Moore was potent at the plate this weekend for Butler as she hit .600 and totaled 6 hits across the five games. Moore hit her first home run of the season in a 7-2 win over East Carolina on Saturday. It was just the second home run of her Butler career.

She had yet to post a multi-hit game this season until she did it twice against East Carolina and Fairfield.

Even last year it took Moore some time to get going for Butler, though that may have had more to do with finding her footing after an ACL-tear as a freshman. She was hitting .225 heading into the second half of the 2019 season then was an All-Big East selection after hitting .441 against conference foes.

3. Ricketts and the Big East Player of the Year race

It’s way too early to be talking about the race for Big East Player of the Year. After all, we still have two more weekends of play before Big East play even starts. But Karli Ricketts would have to at least be in the early discussion for the award.

Ricketts hit her fifth and sixth home runs this weekend to move into second in the conference in the home run category. She trimmed her season ERA down to 1.82 after nine innings of work in the circle.

Ricketts currently ranks among the top-five in Home Runs, RBI, Innings pitched, Strikeouts, and ERA. The only part of her game that is lacking at the moment is her batting average but it’s been on a steady rise throughout the season. She was only hitting .188 after the first weekend of play and now she’s hitting .245

Another player in the conversation is last year’s POY, Paige Rauch from Villanova, who is off to a great start as well. She’s hitting .426 and has 10 home runs and 25 RBI. Rauch also has a 2.29 ERA and no-hitter to her resume this year.

Again, it’s way too early for Player of the Year chatter, but something to keep an eye on nonetheless. Follow Keelen on Twitter @KeelenBarlow