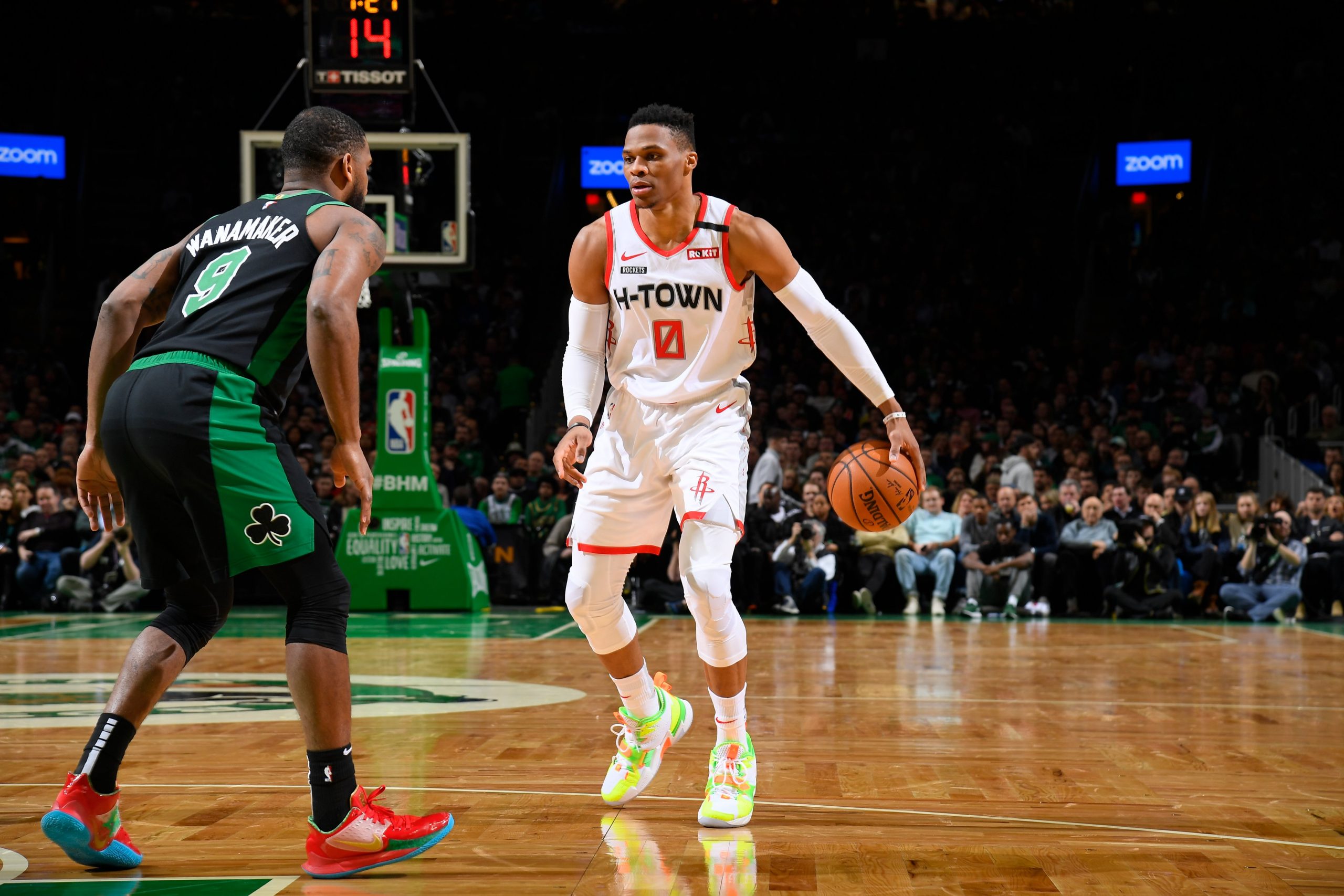 Russell Westbrook dribbles the ball against the Celtics in a game this season. Westbrook has improved from 23.5% to 38% from beyond the arc since the Rockets switched to small ball. Photo courtesy of Houston Rockets on Twitter.

The Houston Rockets are in the middle of an experiment that is unlike anything the NBA has seen in years — they have abandoned the center position and have unleashed the ultimate small ball lineup.

When they shipped off the NBA’s fourth-leading rebounder, Clint Capela, at the trade deadline to Atlanta for Robert Covington, it sent shock waves through the league. How are they going to rebound? Who’s going to guard Anthony Davis or Rudy Gobert? Most importantly, who’s going to take the jump ball?

All these questions came to the forefront in their first game after the trade, against the Western Conference-leading Los Angeles Lakers. The NBA’s scoring leader James Harden lined up for the tip off against the half-foot-taller JaVale McGee and off the game went.

The Rockets were only outrebounded by three against the huge Lakers lineup, and they won the game by 11. Although they didn’t have an answer for Davis in the paint, the Lakers looked lost trying to defend two MVP guards with loads of space.

After this game, it became clear that there was something special about the small ball lineup. This season, the Rockets are 22-17 with Capela starting and 17-4 without him in the lineup, including 7-3 since the trade. As good of a center as Capela is, he didn’t fit with the newly-acquired Russell Westbrook. Just three seasons removed from winning the MVP, Westbrook was struggling early in the season. Before the switch to the small ball lineup, Westbrook was shooting an abysmal 23.5% from three.

As a result, defenders are leaving Westbrook open on the 3-point line, more worried about him driving to the rim in open space than as a shooter. Since the switch, he is shooting a much improved 38% from 3-point range.

Offensively, the change for the Rockets makes a lot of sense. The switch allows all five Rockets to stand outside the 3-point line, making it much more difficult for opposing teams to guard the paint. Harden and Westbrook are two of the best in the league at getting to the rim and drawing fouls, and the small ball lineup makes that even easier for them. Harden is often double-teamed because of opponents’ fear of his isolation game, opening up the floor that much more for Westbrook and company.

The Rockets team is stacked with shooters, including Eric Gordon, who had a 50-point game earlier this year, and a plethora of three-and-d wings like Robert Covington and Danuel House Jr. It’s also hard to overlook the importance of 6’5” center PJ Tucker. Offensively, he acts as another wing, lining up in the corner and shooting above 40% on corner threes. On defense, Tucker punches above his weight every game and is a big reason why the Rockets remain competent on that side of the floor.

So far, rebounding hasn’t been as much of a problem for the Rockets as many thought it would be, in large part because Harden and Westbrook are two of the best rebounding guards in the league, ranking fourth and second among guards respectively.

Although they have secured wins versus both the smaller Celtics lineup and the Jazz with two-time Defensive Player of the Year, seven-footer Rudy Gobert, there are still major problems on defense, as they rank in the bottom third in points allowed and steals per game. These defensive deficiencies were on full display in Monday’s 125-123 loss to the lowly Knicks. However, many of these problems, like a lack of elite defenders, were already present before the trade.

At this point, it’s clear this move gives the Rockets their best chance to bring home a championship, but this move means more than that. This change is a symptom in a larger trend the NBA has experienced in recent years. The NBA has seen a consistent uptick in 3-point shots, and teams have been trying in recent years to have as many shooters on the floor as possible.

For example, the Rockets are chucking an absurd 44 threes per game this season, almost double the amount that the league-leading Boston Celtics shot in the 2001-2002 season. The Rockets small ball experiment is a logical conclusion to this trend, by only playing guys that can shoot effectively from three.

If this experiment brings Houston a championship, it would change the way that many general managers go about constructing their teams. It would likely accelerate the trend of exiling non-shooting big men and make big men who can shoot all the more valuable.

Unfortunately for the Rockets, a championship is unlikely. Although they are nearly unstoppable on offense now, everything gets more confined in the playoffs — which will not bode well for them. In addition, teams will have an entire half a season of film on this new-look Rockets, and playing in a seven-game series against one team is a completely different animal than a random Wednesday in February.

Ultimately, their lack of an elite defense will be their downfall in the playoffs, as they won’t be able to keep up with Kawhi’s Clippers or LeBron’s Lakers.

Or maybe, just maybe, these small ball Rockets will shock the world.