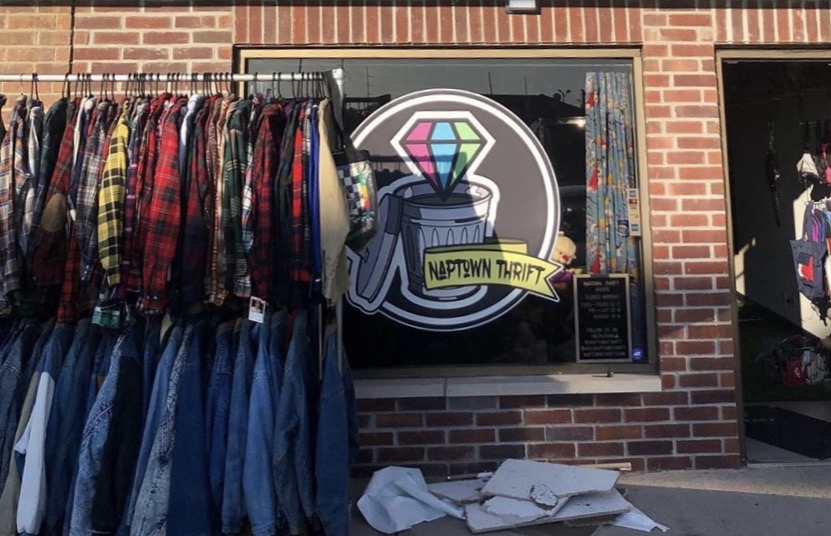 For fans of vintage store Naptown Thrift, waiting in clogged lines in cold, windy weather on Feb. 29 was worth it to experience its grand reopening. In October 2019, Naptown Thrift temporarily closed due to an electrical fire next door. Now, four months later, the store has reopened.

Less than three miles from campus, Naptown Thrift is a popular go-to store for many Butler students. The store came from humble beginnings, when Aaron Marshall and his parents rented a storage unit and stuffed it with products in 2015. At that time, Marshall was still in school and only saw customers by appointment. Now, the store boasts over 17,000 followers on Instagram.

The closure posed a challenge for Marshall, a 2018 Butler graduate and owner of Naptown Thrift.

“That’s just something you can never expect to happen, and it happened,” Marshall said.

In the four months that it was closed, Naptown Thrift looked ahead to a grand reopening. Marshall continued to post new products on social media — mostly their speciality of vintage 1980s and 1990s graphic t-shirts — that would be available at the grand reopening.

After keeping products in a storage unit, Naptown Thrift’s grand reopening had vintage connoisseurs rushing to snag the merchandise from their Instagram feeds.

“For there to be a line wrapping almost to the street for the first three and a half hours of us being open on Saturday was definitely exceeding our expectations,” Marshall said. “I think that’s a testament to our followers and customer base we’ve built up before the fire happened, and the hype that we built up while being closed.”

Rachael Nichols, a sophomore marketing and finance double major, planned to attend Naptown Thrift’s grand reopening since it was announced. The reminder on Nichols’ phone reflected her dedication to being the first one there. Before the fire, Nichols had been a frequent shopper at Naptown Thrift.

“They have a variety of everything, so it’s not just one type of vintage clothing,” Nichols said. “They have items that cater towards every personality, which I thought was super cool and interesting. I think I was going maybe once or twice every other week, it was like an addiction.”

Marshall said customers were steadily streaming throughout all eight hours the store was open. When they needed a break from scanning the aisles, customers could play Mario Kart on a Nintendo GameCube before heading out.

“It exceeded our expectations, and the amount of people that came out and showed love and told us how happy they were that we were back — you can’t describe that feeling.” Marshall said.

Ryan Gernady, a sophomore environmental studies major, is a store regular as well. Gernady visited Naptown Thrift just one day before the fire, and was upset when he saw an Instagram post breaking the news about the fire.

“I’m super happy that they’re reopening, and they have a bunch of new stuff too which is great,” Gernady said. “I didn’t know if they ever would, honestly.”