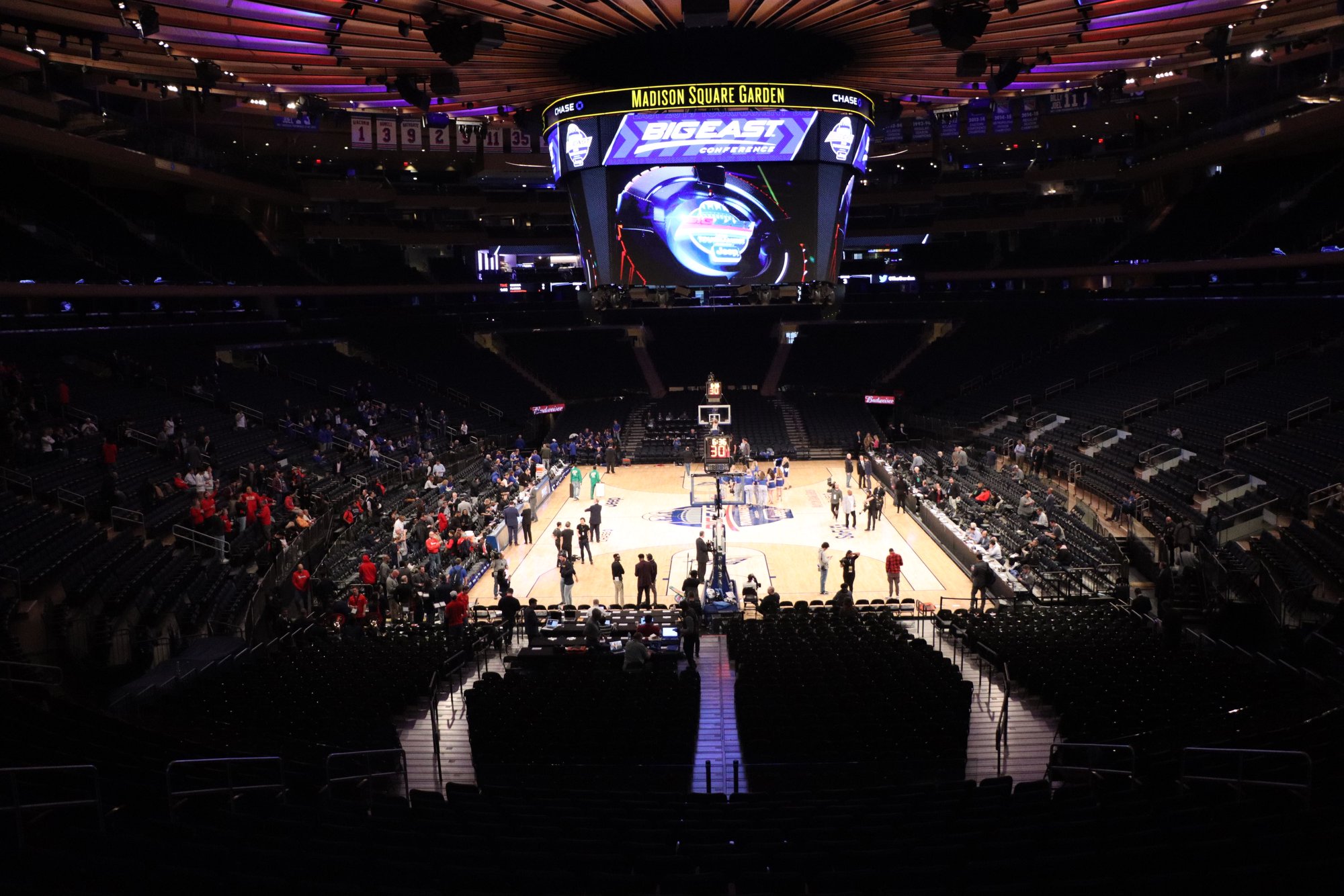 The Big East tournament was canceled on March 12 at halftime of the St. John’s and Creighton quarterfinal game. Photo by Xan Korman.

The Big East Men’s Basketball Tournament kicked off from Madison Square Garden in New York City the night of March 11. No one could have guessed what unfolded in the next 24 hours.

With fears surrounding the coronavirus pandemic rising as more and more confirmed cases were reported, college basketball tournaments around the country were closing their doors to the public.

The Big Ten announced its cancelation of its conference tournament the morning of March 12 and within mere hours, nearly every other conference followed suit. Later in the day, the NCAA announced it would cancel its basketball championships.

The Big East, however, was the only conference to begin its play on the 12th, a game in front of less than 500 fans between St. John’s and Creighton. However, the game was called at halftime leading to a bizarre series of events for all in attendance. The Big East tournament was canceled as quickly as it was started, along with the rest of the sports world.

Three members of The Butler Collegian were in Madison Square Garden to cover those games. Here are their stories from inside the arena on a historic day in the world of sports.

Being a native New Yorker in a Villanova family, the Big East Tournament has become a part of my family tradition.

I thought that the 2018 Big East tournament would be my craziest experience, when Butler’s famous live-mascot Trip and President Danko surprised me with my acceptance letter at the game. Well, this year definitely beat that on the craziness scale.

I attended the first two games on Wednesday night, where I learned that fan access to the following games would be restricted. Luckily, media was allowed and I would be able to watch Butler. On Thursday morning, I arrived at The Garden for the game between St. John’s and Creighton. I was eager to see what it would be like playing in front of an empty Madison Square Garden.

The game was close and exciting, kind of awkward during timeouts when there was nobody to put on the jumbo-tron and nobody to throw t-shirts out to, but it was nice because I could basically sit wherever I wanted to.

The first half was almost over, and there was no official word that the Big East canceled the tournament. Val Ackerman and New York was still going strong.

It was at the start of halftime, when the workers, who wipe down the court in green Libman tracksuits, picked up their mops and left. That was when I knew this game and the rest of the tournament would be over.

My eyes darted around the arena. I saw St. John’s families putting their red jackets on and team managers wheeling the Gatorade carts away from the bench. I was afraid to go on Twitter, but there it was. The Big East Tournament was cancelled.

It hurt my heart that I may never see Kamar Baldwin or Sean McDermott wear a Butler jersey again, especially knowing how competitive the Big East was this year and how exciting it would have been to see this week play out. I also felt bad for the Butler staff, fans, dance and cheer teams that traveled to New York and did not even enter the doors of Madison Square Garden.

I am thankful that I got to watch one of the last college basketball games this season, and while I would do anything for March Madness, I hope everyone stays healthy and we can look forward to next year.

Hearing the news that I was going to be able to cover the Big East Tournament in New York City at Madison Square Garden was one of the happiest days in recent memory.

I was so excited to cover the Butler men’s basketball team in this nationally televised event. I arrived in New York City excited to cover the game, and even went to the media event the day before Butler was scheduled to play. That night, it was announced that the games Thursday would go on without fans, and I was just glad to see that credentialed media would still be allowed entry.

As the players were warming up Thursday morning for the first game, Madison Square Garden was empty. Dead. I would’ve been able to hear a pin drop. It was almost surreal.

Just before tip, I heard that the ACC, SEC, and Big 10 conference championships were being canceled from another photographer. I also heard that the Big East staff was having a meeting to discuss whether or not to go on with the games.

I was really just hoping to see Butler play — at the very least. I was shooting the Creighton vs. St. John’s game, it was interesting because there were maybe three times as many Creighton fans as there were St. John’s fans.

I was walking towards the media room when I heard the tournament was canceled, so I ran to check that it really was. I then went back to the court and talked with a few people who were all as shocked and confused as I was. Nobody knew whether the game was going to finish or not, and what was going to happen overall.

I then heard there was a press conference and I was walking in that direction, when I ran into a St. John’s player. I looked at him and I said something along the lines of, “Isn’t this just crazy, man?” He responded by saying how disappointed he was because he was looking forward to finishing the game and how he felt bad for all the Creighton fans who traveled from Nebraska.

Later in the day, I met up with some of the Butler basketball players and their families, who were all disappointed and upset they wouldn’t be able to play. I was actually with them when the cancelation of the NCAA tournament was announced. I was in shock, along with all of them.

I was expecting a career-changing experience in New York in a beneficial way, but ended up with a negative experience.

For me, the craziest part of this week was just how quickly everything turned on its head. I started the week working in the media seats near the top of Madison Square Garden covering what turned out to be a great game between St. John’s and Georgetown.

I distinctly remember thinking how great this week was going to be considering how competitive the first game was — how energized the crowd got when St. John’s went on their run.

Keep in mind, I don’t think any of the power 5 conferences had even closed their tournaments to fans quite yet. The NCAA Tournament had, but that was seen as unnecessarily porgressive by many on social media. This is 9 p.m. the night of March 11.

Then, all hell started breaking loose on social media.

See, in the past, this issue had been one between fans and players. No fans meant preventing the spread between each other and players, the most important piece of this puzzle.

However, when it was revealed that Utah Jazz player Rudy Gobert had contracted COVID-19, it became an issue of players infecting other players. There was no safe space anymore.

It must’ve only been a few minutes from that announcement to when it was tweeted that the NBA season would be suspended. I could tell in that short amount of time that the energy level in the building had taken a massive dive south.

While the players had no idea what was going on outside of the walls of The World’s Most Famous Arena, fans certainly did. And they knew this was not a positive sign for things going forward. Despite a highly entertaining game between DePaul and Xavier, the energy had noticeably been sucked out of the building. Fans knew this story would not have a happy ending.

I left the building that night ecstatic about covering so many firsts in my young college basketball career, but I was pessimistic that it could also be my last.

Then, the next morning, my hope was renewed when the noon tip was minutes away and no new developments about the virus had come from any tournaments. No news was good news. I remember thinking to myself, “Considering the circumstances, this thing might actually see its way through.”

Then, I caught a glimpse of the TV in the media room in the depths of MSG that read, “Big Ten, AAC and SEC to cancel conference tournaments.”

My heart fell to my stomach. It was finally the beginning of the end for college basketball this season. I just waited for the Big East to announce the same.

However, as tip time neared, the players were still getting ready. Then, they tipped. It was probably the most shocking thing that I saw all week.

As the game went on, more tournaments canceled. I started with the attitude of “The Big East is awesome!”, but as the half went on, my attitude shifted to “What the hell are we doing?”

I got notifications that the Big East tournament had canceled almost as soon as the players entered the tunnels. A few minutes later, the PA announcer made the statement, and I left my new favorite arena feeling like I was in an alternate reality. As quickly I became enthralled with being in person for the Big East Tournament in MSG, it was all over.

And I began to think of the Big East seniors that had played their final game without knowing it — Myles Powell, Markus Howard, Kamar Baldwin, Alpha Diallo, Tyrique Jones.

It truly was March Sadness.