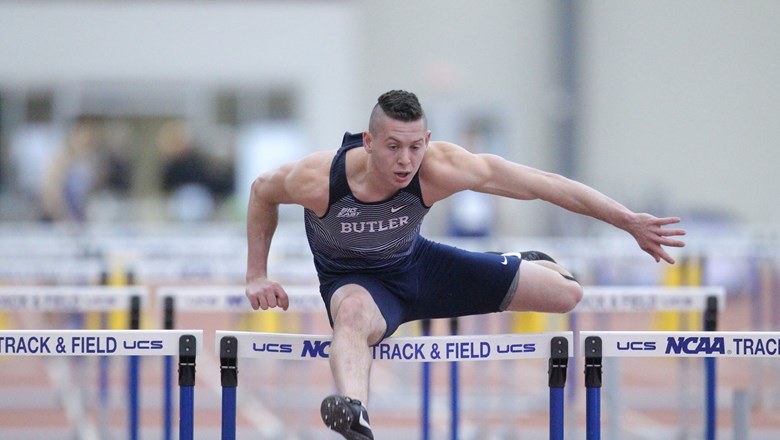 Wade Walder leaps over a hurdle during a meet this season. Walder defended his heptathlon championship at the Big East Indoor Championship. Photo courtesy of Butler Athletics.

The Butler Indoor Track and Field team completed their best performance in program history at the 2020 Big East Indoor Championships in Geneva, Ohio, on March 2.

The women’s team finished third overall with 99 points and the men finished fourth with 93 points, which is the best combined finish in the Big East Indoor Championships in program history. Villanova won both the men’s and women’s side for the third straight year.

Overall, four Bulldogs became Big East champions and 14 were medalists in their events.

Wade Walder was named the Men’s Most Outstanding Performer in Field Events for the second straight year after defending his title as the men’s heptathlon Big East champion with a score of 5,413. Walder was also the Men’s High Point Performer of the Meet with 25 points.

Euan Makepeace was unanimously chosen as the Men’s Most Outstanding Performer in track events as he became the Big East Champ in the 5,000-meter and defended his title in the 3,000-meter.

Sam Robinson won the long jump with a mark of 7.38 meters. Robinson also finished sixth in the high jump and achieved a new personal best in the triple jump. He had the fourth most men’s points scored with 19.5, just behind his teammate Makepeace with 20.

On the women’s side, Niki Ezeh was named the Women’s Most Outstanding Co-Performer in field events along with DePaul’s Jade Gates. Ezeh broke the school record with 3,678 points in her pentathlon win. She also finished fourth in the 60-meter hurdles with a time of 8.75.

The women’s relay teams anchored the teams’ third place finish, with two close finishes in both the 4×800 and the 4×400. Madi Provo, Morgan Walsh, Josephine Thestrup, and Camille Hines secured third in the 4×800, finishing third and just 0.1 seconds ahead of Providence. The 4×400 team of Rebecca Collester, Maddie Miller, Carson Fields, and Lily Hess finished just half a second ahead of fourth place finisher Marquette.

Butler will begin the outdoor track and field season on March 21 when they host the Stan Lyons Invitational.