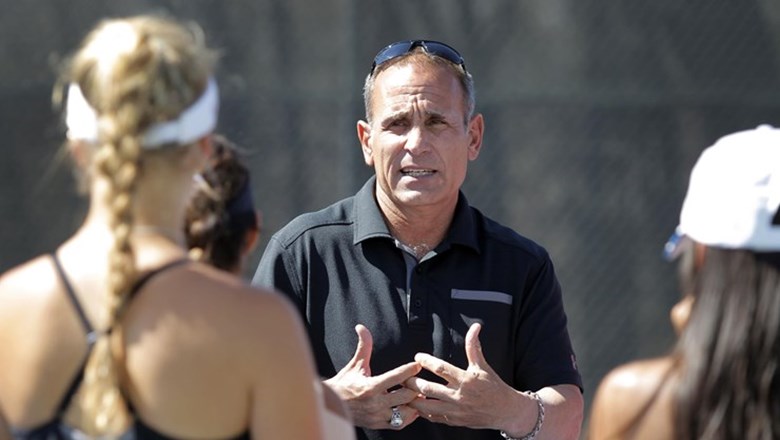 Mat Iandolo is in his first year as Butler women’s tennis head coach after serving as the head coach at Utah for the last 12 seasons. Photo courtesy of Butler athletics.

Before finding his way to becoming the head coach of the Butler women’s tennis team, Mat Iandolo has had a lifetime of experience to make him more than worthy of the position.

Iandolo began his career in coaching as a floating assistant coach in the 1980s. He coached at various universities throughout the country including Kentucky, UCLA, California and San Diego State.

After years of being an assistant coach, in 1991, Iandolo landed his first head coaching gig for the women’s tennis team at Purdue University. While the Boilermakers sat at the bottom of the Big Ten conference, Iandolo worked to turn the program around.

Iandolo led the Boilermakers to five NCAA Tournament appearances during his tenure, and the 2006 regional final. He was recognized with Big Ten Coach of the Year honors — 1998 and 2003 — while also mentoring 10 student-athletes to All-Big Ten First Team honors.

Even after 16 successful years of coaching at Purdue, Iandolo wanted a change — he wanted to move on to something bigger. That opportunity came when he was offered to take over as head coach for the women’s tennis at the University of Utah.

The Utes were a program that was in need of a rebuild. This made Iandolo a perfect match for the struggling program.

“I’ve made a career off of building teams from the ground up,” Iandolo said. “I’m able to develop players and get them to reach their potential.”

During his coaching tenure with the Utes, Iandolo produced eight All-Pac-12 selections and 13 All-Mountain West Conference selections. This included 2011 MWC Women’s Tennis Player of the Year, Anastasia Putilina, and 2008 MWC Freshman of the Year, Evgenia Kryuchkova. In addition, Iandolo received Utah’s 2009-10 Don B. Reddish Coach of the Year Award.

With the talent Iandolo acquired and developed, the Utes began to reach new heights on a national scale.

“I took them from an unranked team to being in the national polls every week,” Iandolo said. “I was able to put the program on the map and get our team into the power five conversation.”

Iandolo did just that. In six of his 12 seasons at Utah, the team earned a Top 50 finish in the final ITA national rankings while also earning bids to the NCAA Tournament in 2010, 2011 and 2012.

In his last season with the Utes, Iandolo led Utah to a top-50 finish in the ITA final poll finishing ranked at No. 44. Utah also posted a No. 2 ranking in the ITA Mountain Region poll.

Despite Iandolo’s track record of success, changes within Utah’s athletic department would lead  the women’s tennis program in a new direction.

In 2019, the university hired a new athletic director in Mark Harlan. Harlan issued a “comprehensive review of the program,” and wanted to make changes to further the success of the tennis program.

“We weren’t seeing eye-to-eye,” Iandolo said. “We had different ideas on where we wanted to take the program in the future.”

This led to a parting of ways between the university and Iandolo.

Following his release, Iandolo decided to explore what opportunities were out there for him at this stage in his career. Coincidentally, around the same time of departure, the position of head coach for the Butler women’s tennis opened up. Iandolo was interested in this opportunity.

“I was very familiar with Indiana and Indianapolis because of my days at Purdue,” Iandolo said. “I enjoy the city with the small school. It gives a seclusive vibe.”

What intrigued Iandolo the most about Butler was the university’s high standards of academics. At Utah, Iandolo was able to land three athletes on the 2019 Pac-12 All-Academic teams, and one player was named the 2019 Pac-12 Women’s Tennis Scholar-Athlete of the Year.

“I saw great potential at the possibilities,” Iandolo said. “Being able to link quality young women with my experience of building up programs.”

Iandolo applied and was offered the job in June 2019. Prior to Iandolo’s hire, the tennis team had gone through a gauntlet of head coaches over the last couple years — with Iandolo being the third head coach in the last three seasons.

“We’ve struggled a bit with coaches,” senior Caroline McCauley said. “It’s much easier when you have a coach that’s able to build everyone up as players, develop everyone’s games. That first meeting [with the team] was very reassuring for all of us knowing that he believes in our program and believes in us as players and wants to get us to that level we know we can be at.”

Although the women’s tennis team isn’t considered a prestigious program in the collegiate tennis world, Iandolo believes the team is not far off.

“Commitment has never been an issue with this team,” Iandolo said. “The girls are very well dedicated. We just need to level up the consistency and build confidence through work.”

Iandolo hopes to develop the talent within the roster, while working on bringing in new recruits. With Butler’s low status in the tennis realm, however, the university doesn’t garner the attention of high-rated recruits.

“The program doesn’t attract the highest rated players of our high school or the juniors,” Iandolo said. “But that doesn’t matter to me. I’ve built my career of finding diamonds in the rough.”

“With the amount of success he’s had as a coach in his past coaching jobs, it’s pretty easy to know that, as a player, it’s easy to see that he knows what he’s doing and easy to trust what he’s making us do,” McCauley said. “There’s a lot of purpose and thought that goes into it. “

While many may view this team as a “stepping stone job,” Iandolo sees it as a final destination in the twilight of his coaching career.

“I’m at the final chapter of my coaching career,” he said. “My goal is to build this program into a Big East title winner before I hang it up.”

Although Iandolo has only been at the helm for about eight months, he said the transition has been seamless and sees a bright future ahead for the program.“The move has been above and beyond what I thought it was going to be,” Iandolo said. “The challenge is going to be a lot, but we have it within the team to be a great program.”