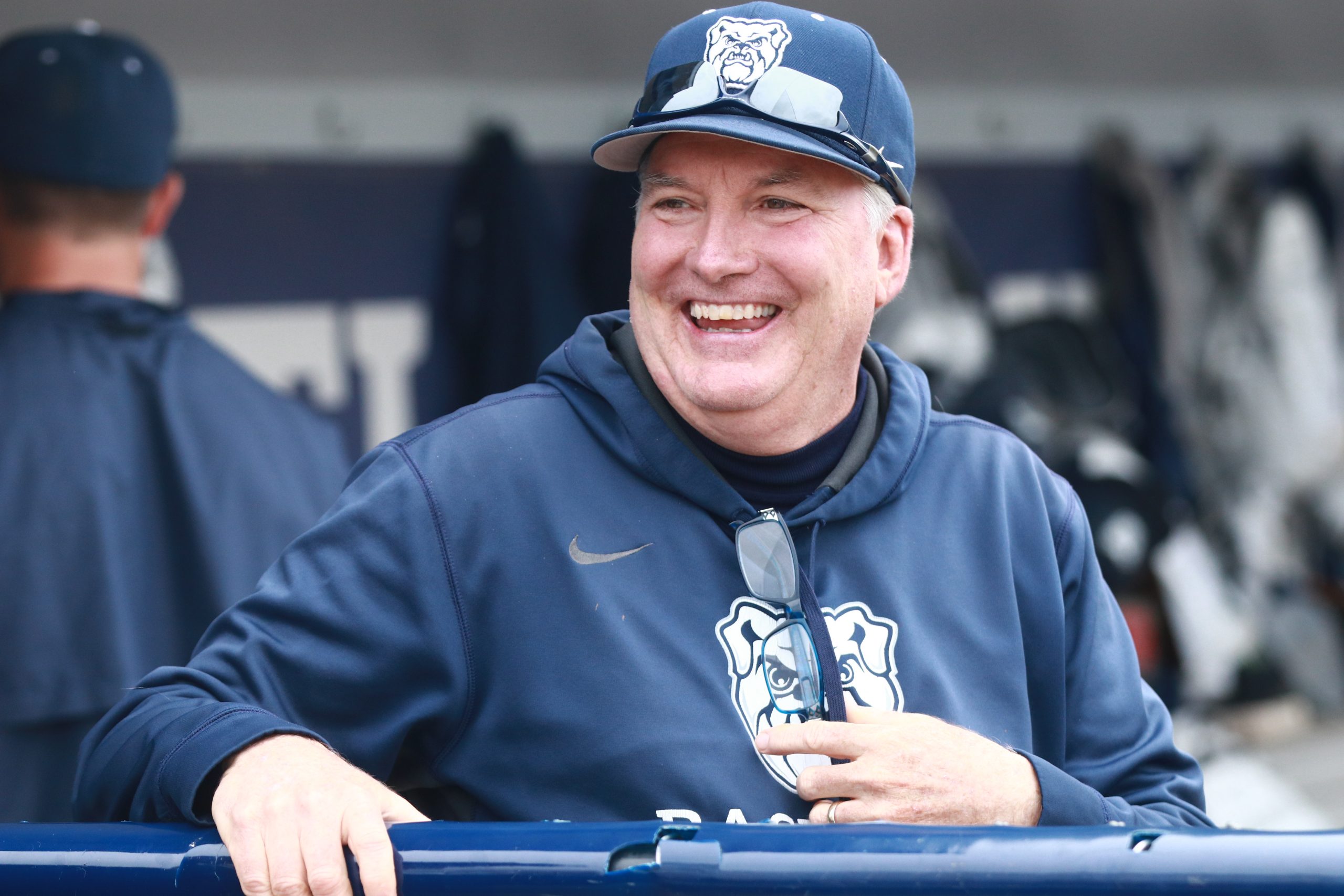 The Butler Collegian sat down with fourth-year head baseball coach Dave Schrage to discuss his recent contract extension, his passion for coaching and Butler’s upcoming season.

The Butler Collegian: Recently, you got extended to be the coach at Butler. So could you speak on that and what this means for the future of the program?

Dave Schrage: First, I’d like to thank Barry Collier for giving me the opportunity to continue here and coach at Butler. I love being at this university. The student-athletes here are tremendous to work with. We’ve improved the program since I’ve been here. We’ve had three years of non-losing seasons, so that’s been a big plus. You have to go back in the record book a few years to see that happen. Our next level now for me is to improve our facility: get the money and funds raised so we can build a stadium and get some lights and field turf out here and start drawing some people. Also, I want to get us back to an NCAA regional… It’s been almost 20 years and I want to get us back to an NCAA regional here in the Big East conference. I think we’ve got a good base going right now. So, we gotta take the next step now.

TBC: What’s your main approach when trying to recruit student-athletes to Butler?

DS: First of all, we look in our own backyard. We try to get as many kids as we can that can play at this level from the city of Indianapolis. There’s good baseball in the city. We go after those kids and then we go after the state of Indiana. When we won in Missouri Valley when I was at Evansville, I think we had 12-13 kids on that team from the city of Evansville. So, we try to stay as local as we can and then we branch out. So it goes from your backyard, to the state, to the region, to national… Butler’s got more of a national base now with basketball… They’ve heard of Butler. They know Butler and it’s because of what our basketball team has done and it’s because of the growth that our program has had in the Big East conference… So, that’s opened a few more doors for us recruiting wise.

TBC: What will the addition of assistant coaches Matt Kennedy and Jake Ratz add to the program?

DS: …Matt is a native guy from Indiana. Grew up in West Lafayette. Won a national championship as a head coach at Parkland Junior College in Champaign. Coached at Indiana State. Coached at St. Joseph’s up in Rensselaer. So, he knows the Midwest. He knows Indiana really well. He’s got great ties. He’s really going to elevate our recruiting. He’ll work with our hitters, infielders and catchers. And then Jake Ratz played with me at South Dakota State. In the last five years, Jake has been an assistant at junior colleges in Iowa. Jake knows my system. He knows how I work. He’s working with the outfielders and the hitters as well. Coach first base. Run all our camps. Do a lot of our external stuff with the youth baseball teams in the community. So, we’re really happy to replace our two guys with two quality individuals in Matt and Jake. I don’t think we’ve lost a beat. We started practice and the guys really like these guys and they’ve picked up where Andy and Brian have left off.

TBC: You’ve coached at the collegiate level for over 35 years, what makes you stick to college?

DS: I love the college aspect of baseball… But I love the college aspect because you’re dealing with 18-22 year old kids. I feel like in that four-year span, that they really develop into adults during that time. They’re away from their parents. Sometimes they make the right decisions, sometimes they don’t. But, I love this area to be a major influence in their life and direct them in what they’re going to do. Yes, I want them to become better baseball players, but my ultimate goal is that when they leave here, that they’re going to be better fathers, better husbands, better business people in their careers. And that’s why I coach. I get my rewards when I go to my former players’ weddings and those types of things. That’s the fun part of it. I’m in it to win games and graduate our student-athletes but I’m in it to develop them as people.

TBC: What were some focuses for you this off-season?

DS: Finishing games… I believe we lost seven or nine games in the last two innings, where we had leads. That’s something we have to work on. Finishing and closing games. Protecting leads. We were ahead a lot in the 5th, 6th, 7th inning and weren’t able to protect leads. So, we feel like our bullpen is getting a little bit stronger. Has a little more depth this year. That’s what we worked on in the fall. A lot of putting guys in situations where we had to finish games when we had to compete. Controlled scrimmages where OK you’re up one run, it’s the ninth inning. You’re up two runs it’s the eighth inning. Then play a two inning scrimmage.

TBC: What are your expectations for the team heading into the season?

DS: Get better every day. Those are what we practice. If we build on that, hopefully by the time we enter conference play in April, we’ll be ready to make a run at the conference tournament. We want to finish top four in the league. We want to get to the conference tournament and give ourselves the opportunity to get into the regional one… I don’t like saying, ‘My expectations are I want to win 30 games,’…If we get better every day in our process and believe in our process, we’ll be good. We’ll get there.

TBC: So I know you are a Chicago native and you got some Cubs memorabilia around your office? What do you think about the Cubs this season?

DS: I don’t know. I was disappointed we didn’t do anything over the winter. So, it’s basically the same team except we got Ross managing instead of Maddon, so maybe that’ll make a difference… I think they want to see how this team responds under Ross. I think Theo still believes in the guys that have been there but I don’t know if they got a lot better because they lost Castellanos, didn’t replace him. We lost Hamels, didn’t replace him. So, I don’t know where they’re going to come up with those answers… I’m a die hard Cubs fan. When my grandson was born on Jan. 31, the first thing I said to my daughter was that’s Ernie Banks’ Birthday [laughs]. You can see him up there [points to a picture of Banks hanging on his wall], he’s my favorite Cubs player. He was born on that day.

TBC: So maybe he’ll grow up to be a Cubs player?

DS: That would be a dream!