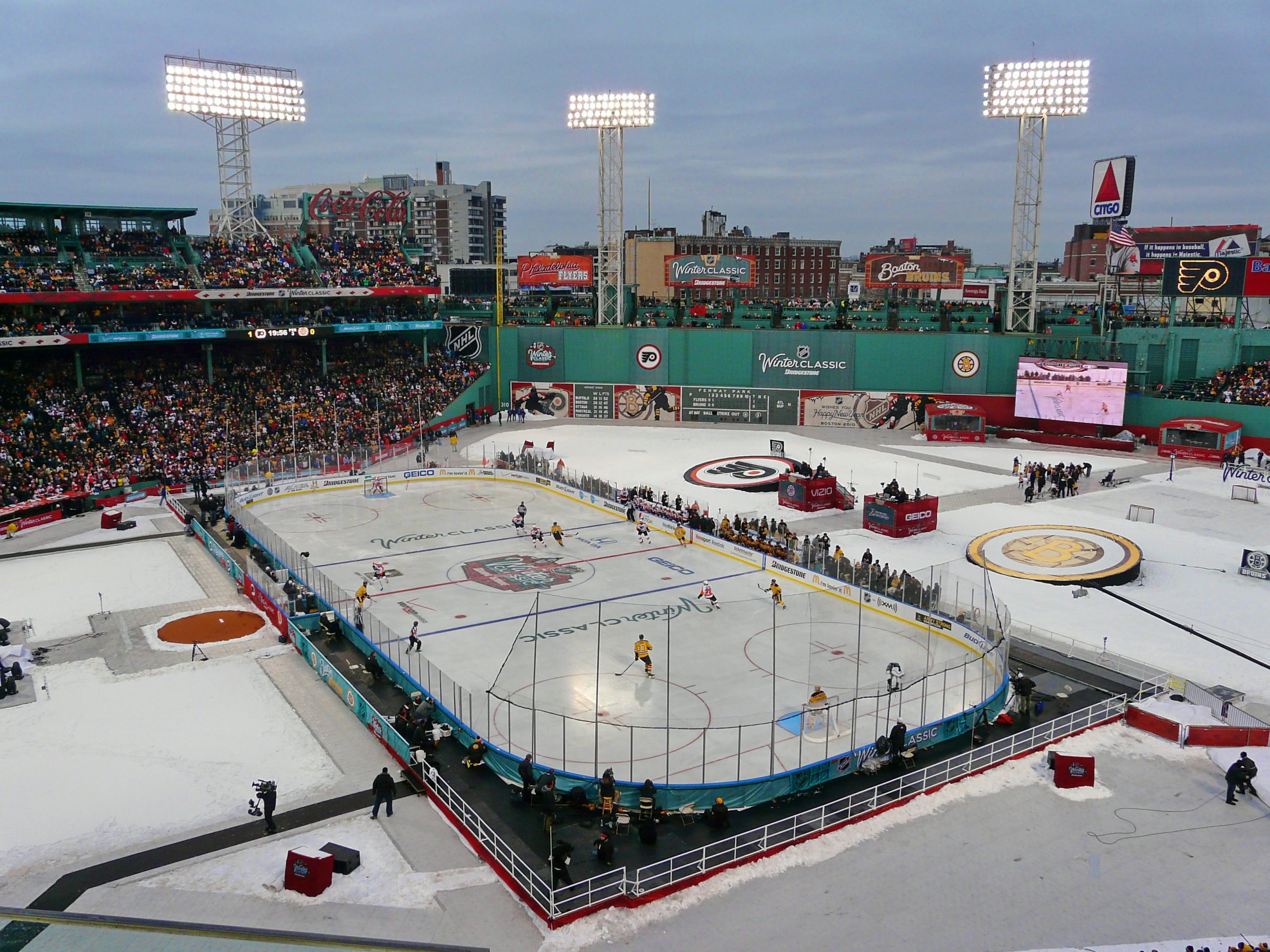 The third installment of the NHL’s Winter Classic featured the Boston Bruins and Philadelphia Flyers in historic Fenway Park in 2010. Photo courtesy of Wikimedia.

There’s a lake only a five-minute walk away from my house in the suburbs of Chicago that freezes over in the heart of winter. When the ice gets thick enough, a mob of kids as young as eight years old wanders down to the bank ready to carve up the naturally built rink. They’re usually wearing skates that are two sizes too big, forcing them to bend at the ankles.

For quite some time, I was among the older of the bunch who’d grab a hockey stick and gloves and try to shoot a puck between two Pepsi cans we’d set up on the ice.

It’s play like that which brings the sport of hockey back to its storied roots. Players would glide across the glassy surface of a pond or lake before the first indoor competition in Montreal, Canada, was held in 1875.

When the NHL first debuted the Winter Classic on New Year’s Day in 2008, it brought many childhood dreams — playing on an outdoor rink in front of thousands of cheering fans — to life. The Buffalo Sabres and Pittsburgh Penguins put on a show at Ralph Wilson Stadium, now New Era Stadium, home of the Buffalo Bills. Over 71,000 fans looked on through the snowfall. With regulation ending 1-1 and standing through overtime, a penalty shootout won by young star Penguin Sidney Crosby cemented the NHL Winter Classic as the next great spectacle in professional American sports.

Twelve years later, the New Year’s tradition still lasts, but the phenomenon has lost some of its exclusivity. With the success of the Classic filling stadiums such as Wrigley Field in Chicago, Citizens Bank Park in Philadelphia and Michigan Stadium in Ann Arbor, the NHL pushed the initiative for more outdoor games.

Under the name “Stadium Series,” the NHL attempted to meet high demand for outdoor competition. Instead, it acts as a cash grab so teams who lack the history of the Original Six can get recognition on a national stage.

With a more modern feel than the Classic’s atmosphere, the Stadium Series was introduced in 2014 with means to sell new merch and overpriced tickets at venues that seat more than a traditional arena — in short, extra ticket sales.

This year, the NHL Stadium Series will have its annual matchup on Feb. 15 in Colorado Springs at Falcon Stadium, home of the Air Force Academy. In yet another football stadium, the Colorado Avalanche and Los Angeles Kings will battle in the 29th outdoor competition since the first Winter Classic just 12 years ago. The NHL has also implemented the “Heritage Classic” for Canadian teams, and the “Centennial Classic” and “NHL100 Classic” each celebrating the league’s 100th anniversary.

I’m not saying that I don’t want to see new teams get to participate in the outdoor spectacle. I think teams that traditionally don’t get a lot of attention on the national stage should have their chance to shine.

However, I do believe that the style of game that honors its history should be honored once a year and not commercialized.

Imagine having Thanksgiving or the Rose Bowl more than once per year. Sure, it would be fun, but it would be a tremendous disrespect to the history and tradition of the events. Now imagine having them six times a year.

In 2014, the NHL hosted the Winter Classic per usual, along with four Stadium Series games, and a Heritage Classic. Six outdoor games in total. They began to rely heavily on the appeal of the stadiums of their competition in football and baseball.

As an alternative to relying on other stadiums and their identity, NHL arenas across the country can promote their own features that make them stand out. Isn’t part of what makes a team special the unique features of the venue they call home? The St. Louis Cardinals have Ballpark Village and the Tampa Bay Buccaneers have a full scale pirate ship.

Perhaps it’s not a giant statue of the mascot, but things that enhance the fan experience will attract sports fans everywhere. Things like unique food options, comfortable box suites or the stadium environment as a whole are marketing tools the NHL and their teams can use to drive attendance.

If the NHL wanted to showcase more teams, they shouldn’t have relied on the same four big market teams so heavily in the beginning. The Chicago Blackhawks lead all teams with six appearances in outdoor games, with the Rangers, Penguins and Flyers each following close behind.

It was a miracle that the league pulled off the first Stadium Series game in Dodger Stadium in California between the Kings and Ducks. Yes, the Golden State held an outdoor hockey game.

The league’s ambitions to push for outdoor games early on were too large. Each major sport has its holiday. The MLB gets Independence Day, NFL with Thanksgiving, NBA with Christmas and now NHL with New Year’s. They were too hungry and began to oversaturate the market of events with games in non-hockey venues.

The arenas they play in are environments that fans, players and coaches are comfortable in. It’s the reason they’re called “home” games. In these home arenas, culture, character and community grew over time.

A trip somewhere new is nice every once and awhile, but vacations lose their significance if it’s a regular thing.