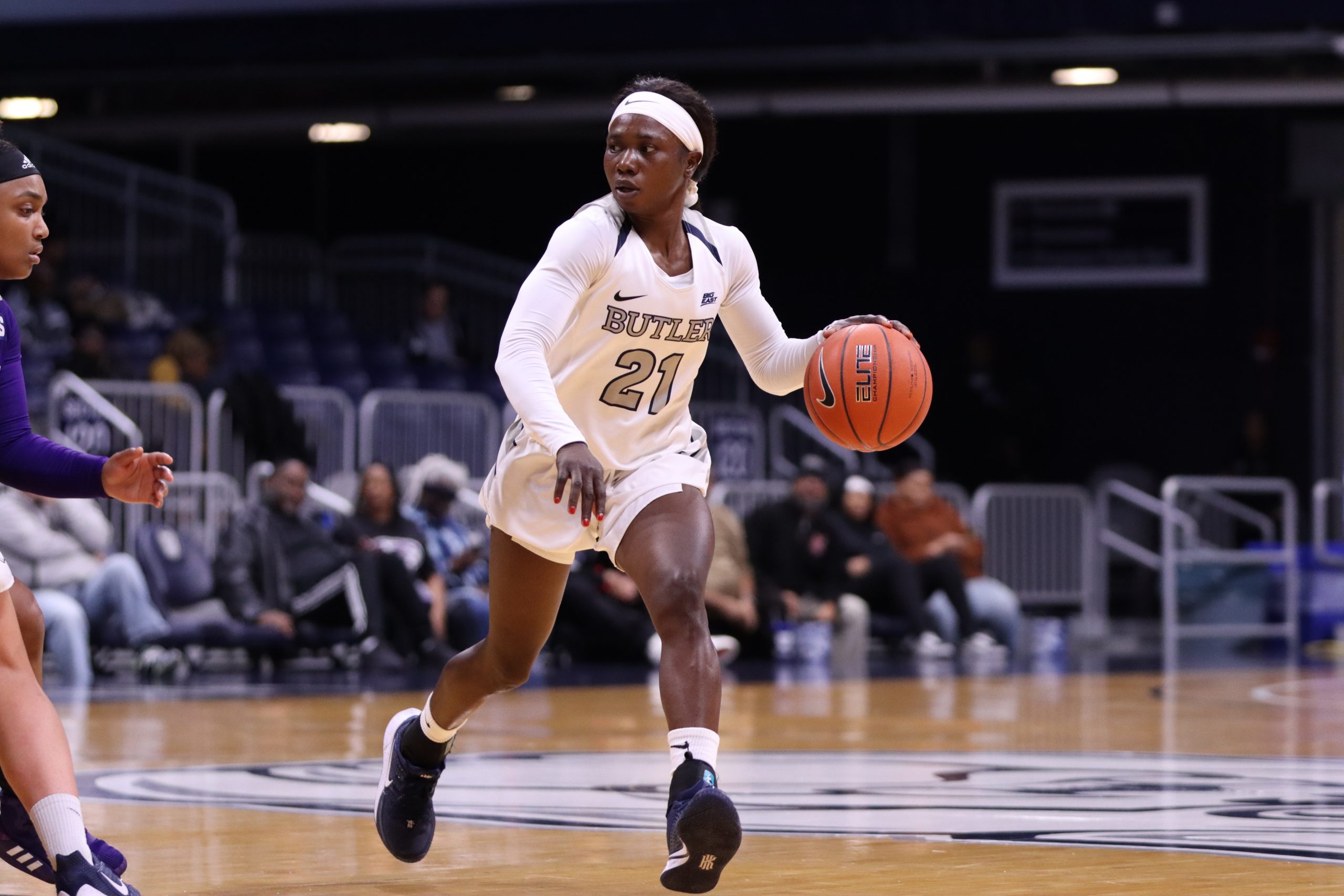 Upe Atosu looks for an open move during a game this season. Atosu is averaging 6.5 points per game in her first season playing for the Bulldogs. Chandler Hart / Collegian file photo.

Upe Atosu didn’t want this for herself, either. All she wanted was to please her mom. Basketball changed her plans. Once she found out about basketball at age 15, it was over —“love at first sight.”

It was more than that. It was, well, life. Exhausted, and without a nearby basketball court, Atosu would bounce a tennis ball against a wall.

Atosu worked hard, and she picked up the sport quickly. The same year she fell in love with the game, in 2009, she started playing with the academy of a team in the Zenith Women’s Basketball League, the First Deepwater Club. Later in the year, the Nigerian National Team extended an invitation to represent her country.

Upe could not afford the team’s traveling expenses herself. Her mother told her, “Go.” Meanwhile, she told Upe, she would work extra hours, selling more beans and hawking more bales of corn.

With her mother’s backing, Atosu felt empowered. Every game, practice, second mattered more. She wouldn’t — couldn’t — waste this opportunity. She ended up playing for the Nigerian National Team in eight tournaments, and in 2017, she finally broke through, helping the team win the Afrobasket in Mali, the country’s first victory.

She averaged 5.8 points per game in the tournament, and American colleges came calling. In 2017, she moved to the U.S. to play for Labette Community College in Kansas. In her first season there, she averaged just under 20 points per game, earning National Junior College Athletic Association First-Team All-American honors.

The 26-year-old Atosu is acutely aware that she wouldn’t have been able to achieve all of this had it not been for her mother’s sacrifice — that she would not be playing a key role in Butler’s 17-8 overall, 9-5 Big East start to the season, nor be the perimeter defensive stopper on the Big East’s best defense.

“Just having your mom in your life is motivation,” Atosu said. “Having her go through life with you, it’s just everything. It’s just everything. So I felt like when I play basketball, sometimes I might be down, in a game, maybe practice, I will feel so tired, I feel worried maybe with classes. Sometimes, when I was down, she would just encourage me. She would pray for me. And after she prayed for me, I found this inner strength in me. I no longer see challenges, I no longer see weakness around me.”

Life felt impossible, but Atosu pushed through. Last year, she transferred to Butler. Now, in her first season of eligibility, Atosu is averaging 6.2 points per game on 32.2 percent from the field and 28.2 percent from three. She realizes she is not playing up to her full potential. Still, she is trying. She is trying to become the player, the person, she once was.

It’s what her mother would have wanted.

When, after one of Butler’s first practices in early August, Ingram was sitting in her office and saw Atosu walk by with her head down, she was concerned.

“As long as she’s been here, she’s been a very buzzy, very vibrant personality, bringing light into any room she walks in,” Ingram said.

At first, Atosu denied anything was wrong. So Ingram asked again.

The second time, Atosu couldn’t help but laugh, admit something was wrong and tell Ingram the truth.

What Atosu was experiencing is common: grief. After choosing to speak to Ingram, she decided to confront and battle grief, instead of allowing it to engulf her. Grief is not linear, it inflicts pain over time. Grief pokes and tugs at the heart, creates sadness, doom, depression, and is never beaten. But communication, vulnerability and faith can fend off those negative traits.

Ingram took this — all of it — into account. She listened to Atosu, joined hands in prayer, and left her with a simple mantra: “Stay strong.”

“It allowed her to recognize that she wasn’t alone,” Ingram said. “That [Butler women’s basketball head coach Kurt Godlevske], all of the staff is here, the team is here for her, and helped her realize that she has a strong group around her that loves her and cares about her.”

After a long fall day, Atosu walked back home to AV, dropped her backpack, collapsed onto her bedroom floor, and pleaded as she did in dire circumstances.

Her schedule this past semester was particularly rigorous. Every Monday and Wednesday, there was 6 a.m. practice, 8:35 a.m. class, 10 a.m. weightlifting, and two afternoon classes. Not to mention the three required study hall hours per week. Atosu had gotten used to her schedule at LaBette — one practice a day, occasional weight-lifting and optional study hall.

Practices were a mess. One practice, she made mistake after mistake, forgetting play after play. Labette’s pick-and-roll offense was more basic than Butler’s, which is packed with misdirections, cross-screens and banana cuts. And since plays weren’t run for Atosu anymore, she had to learn three positions: point guard, shooting guard and small forward.

Atosu just wanted to fit in. She would not even glance at the hoop because she was trying to understand the concepts. Or she was trying to dissect her teammates’ body language. They sounded frustrated, she thought, the way they kept yelling her name.

Godlevske whistled the play dead, called the team to mid-court and gave a speech.

“Everybody needs to be patient,” Godlevske said. “Not get frustrated. We all learn differently. Upe hasn’t had the same basketball experiences and opportunities as the rest of you. We’re just gonna have to be patient and allow her to rep these out, and she’ll get ’em. She’ll learn ’em. And that’s part of us being a good team, being good teammates.”

Since then, Atosu also has felt like her teammates understand where she’s coming from, which “gladdens her heart.” She spent hours alone diagramming the plays, but mostly, her teammates have helped her learn them. Senior guard Kristen Spolyar nudged her into the right positions and fed her advice.

“Take time, visualize this, you got it,” Spolyar would say. “I know there’s a lot. Just pick a couple of plays. Once you got those plays down, work on some more.”

One early evening in November, Atosu texted the women’s basketball group chat: “Has everyone eaten?”

Then she texted Spolyar, “You don chop?”

Atosu is teaching Spolyar her native language: Pidgin English, a mix of English and Creole. “You don chop?” translates to “Have you eaten?” In this case, Spolyar responded, “No chop.”

“I like spicy food,” Spolyar said, “but it was over the top. The spices are way different. She said it wasn’t supposed to be spicy. She’s like, ‘Oh, it’s not that bad.’ She tried it and was like, ‘Whew, I made it way too hot.’ I haven’t tried any of her food since.”

Leaving behind a family in Nigeria — her father, five siblings, a niece and nephew — Butler has become a home away from home for Upe Atosu. She tries to FaceTime her family as much as she can, but the six-hour time difference means they can go days, if not weeks, without speaking.

Her Bulldog teammates and coaches have become her de facto family. Atosu is trying to integrate the Butler Way with the culture her mother passed down. Once she started to fit in, the next logical step was to make her impact felt.

Her teammates may not have taken to her food, but other activities have been a smooth transition. Take prayer. Before the first game of the season, in warmups, Atosu was surprised to find out that the team did not pray together before the game. So she asked her teammates to join hands with her. Now, before every game, in the film room, she leads the team in prayer.

On Feb. 8, a day before Butler hosted Villanova, Atosu and Spolyar fired three-point shots while the team managers rebounded. Meanwhile, a Fox TV host waited at the press table to interview Spolyar and Godlevske.

Thirty minutes later, Atosu sprinted off the court, through the bleachers and into the tunnel. Spolyar hopped up from the scorer’s table, strutted up to the bleachers, and sat in a bleacher seat.

The reporter started asking questions about the team, but Spolyar wanted to talk about Atosu.

“She’s just someone you really wanna be around,” Spolyar said. “If you’re having a bad day, she’s gonna bring you up. And somebody who you always wanna be around. And yeah, she came over to my Christmas and she loved it.”

Spolyar went on, telling a Christmas story. When she found out that Atosu was going to spend Christmas alone in AV, Spolyar invited her over to her house in Lebanon, Indiana. Spolyar’s family got her gifts: a blanket, a robe and makeup kits.

Atosu was invited to a Christmas party at the Ingram household as well. So she attended a second Christmas party. Ingram told her she wouldn’t be allowed to give her gifts due to NCAA rules. Not like it mattered. Atosu merely appreciated the invite. Dinner topics ranged from the differences between Nigerian and American culture to Atosu’s new niece.

“She said, ‘I can’t wait to have a tree, to decorate it, to show everybody the songs, the dancing,’” Ingram said. “And it’s always fun to learn about her culture. To learn about how they do things, how they celebrate family and life, and all that.”

A kind collective gesture from both the Spolyar and Ingram families, sure. But Christmas day exemplified how those around Atosu want to see her not just survive, but heal and thrive.

“She’s just somebody that people want to gravitate towards her just because of her energy,” Spolyar said. “She’s always positive energy. That’s always what she radiates.”

Against Villanova the next day, Atosu showed what she brings to this Butler team, scoring 11 points, including three triples, in Butler’s 63-61 win.

Atosu knows her shots will fall because she hasn’t come this far for nothing. Meanwhile, she will keep pushing herself because she has to. Because she won’t allow her mother’s hard work to be for naught. Because her mother would want nothing less for her daughter.