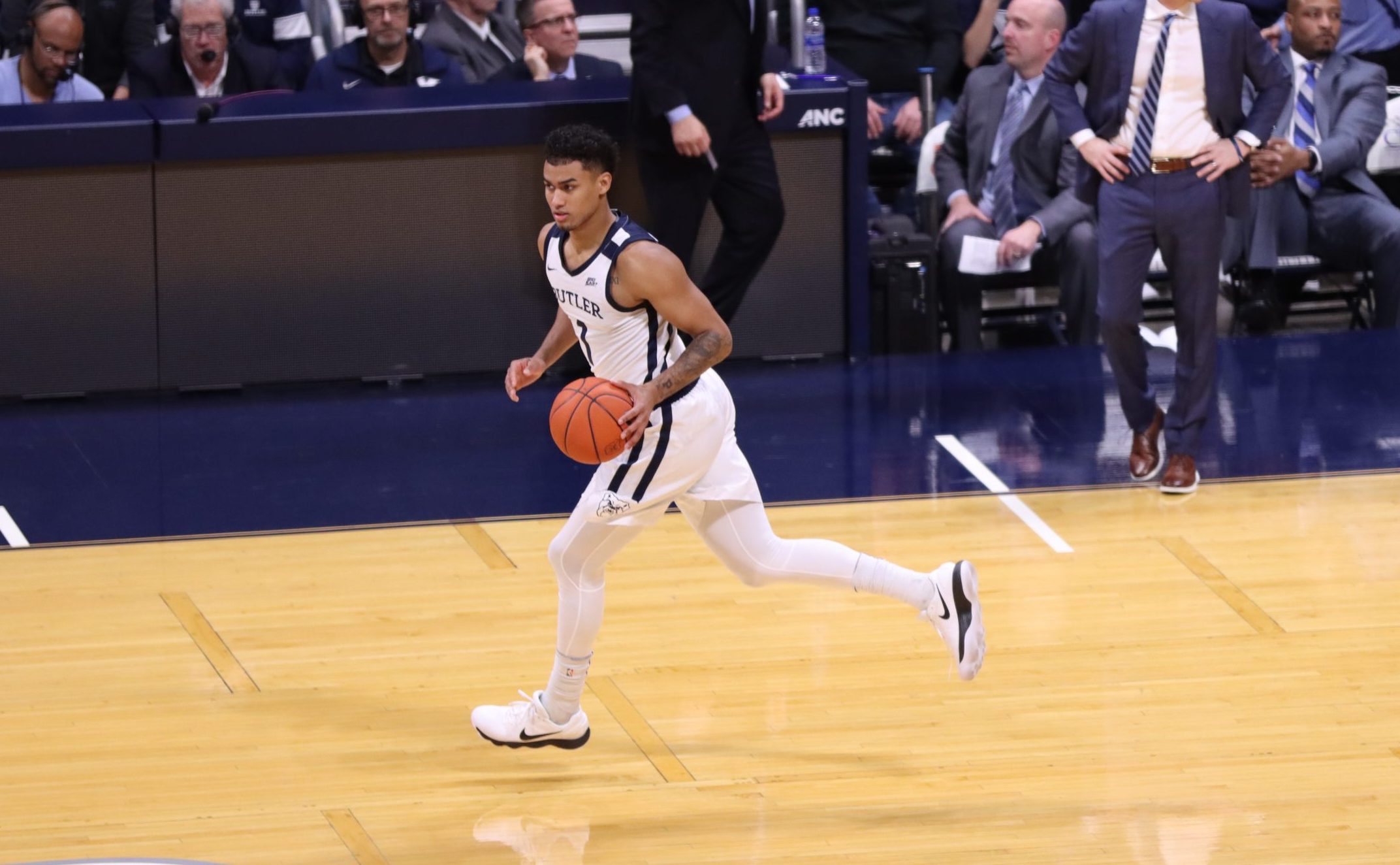 Jordan Tucker brings the ball down the court during Butler’s 66-61 win over Xavier on Feb. 12. Tucker scored 10 points on 4-of-6 from the field in the second half. Photo by Xan Korman.

After falling by its largest deficit of the season to Marquette, the Butler men’s basketball team defeated the Xavier Musketeers 66-61 at Hinkle Fieldhouse on Feb. 12 despite a number of second half challenges. With a 7-5 conference record – and 19-6 overall mark – the Bulldogs now sit alone at fifth in the Big East standings.

Here’s a look at some of the key storylines, stats, notes and quotes from the win:

Henry Baddley and Sean McDermott led the charge offensively in the first half. Baddley, who’d converted just four 3-pointers all season, knocked down three in three attempts in eight first-half minutes. McDermott, coming off a two-point performance with no made field goals at Marquette, played much more aggressively in the first half, and scored eight points on 3-of-7 from the field, including 2-of-5 from beyond the arc. Another five Bulldogs also scored in the first half.

Battling injuries and foul trouble, Butler fended off multiple Xavier runs down the stretch. Aaron Thompson exited just under four minutes into the second half after taking an elbow to the head/neck from Xavier’s Jason Carter while fighting for a rebound. Then, with just over five minutes to play in the second half, Derrik Smits injured his left knee on a play and required significant assistance to make it back to the locker room. Combine that with the fact that Bryce Golden and Bryce Nze were both battling foul trouble for most of the second half, and the Bulldogs found themselves in a tricky situation. The Musketeers went on multiple runs throughout the second half to cut the Bulldogs’ lead to single digits, but each time that occurred, Butler was able to knock down a big shot to halt the run.

Butler head coach LaVall Jordan credited his upperclassmen for helping the team through those challenges. “I think perseverance has been a big word for our locker room. Just leadership. While I’m checking to see if Aaron and Derrik are ok, these guys [McDermott and Kamar Baldwin] are running the huddle and talking about what needs to happen next. … Those moments you learn a lot about your team.”

Jordan Tucker’s second half performance played a major role in fending off the Musketeers’ runs. After finishing the first half 0-of-3 from the field with zero points, the junior forward led the Bulldogs with 10 points in the final 20 minutes on 4-of-6 from the field with two 3-pointers.

Xavier head coach Travis Steele said the Bulldogs capitalized on his team’s mistakes. “The margin for error in this league is razor thin,” he said. “When you turn the ball over against a team like Butler they’re going to make you pay. And they made us pay tonight.”

After dropping four games in a row against Xavier, the Bulldogs have now won two straight against the Musketeers. Xavier still leads the all-time series 41-22.

McDermott played more aggressively on the offensive end, and it paid off. Coming off his first Big East game of the season without a made field goal, the redshirt senior came out of the gates strong against the Musketeers, scoring eight points on 3-of-7 from the field in the first 20 minutes before tacking on another six in the second half. He also led the team in rebounding for the sixth time this season with six boards.

It was far from Kamar Baldwin’s best game offensively, but a number of other Butler players stepped up. The senior guard didn’t knock down his second field goal until there was just 2:34 left in the game, and finished just 3-of-11 from the field with 11 points, his lowest total in conference play. But in addition to double-digit performances from him, Tucker and McDermott, the Bulldogs also got four or more points from every one of the five other players that took the floor for them: Henry Baddley scored nine on 3-of-3 from beyond the arc, Bryce Nze tallied eight, Thompson had six and Golden and Smits each had four.

There was no significant update on the statuses of Thompson or Smits. Jordan said that both players were being evaluated and that more would be known on Thursday. The Butler coach said that as of then Thompson had not entered the concussion protocol.

Up next: In their second home game of the week, the Bulldogs will attempt to sweep the season series against Georgetown on Feb. 15. Playing without Aaron Thompson, Butler overcame an 11-point halftime deficit and Sean McDermott finished with a game-high 25 points as the Bulldogs defeated the Hoyas on the road on Jan. 28. This contest will be Georgetown’s first in seven days. The Hoyas have gone 2-1 since their previous meeting with Butler, with victories over St. John’s and DePaul and a loss to Seton Hall.