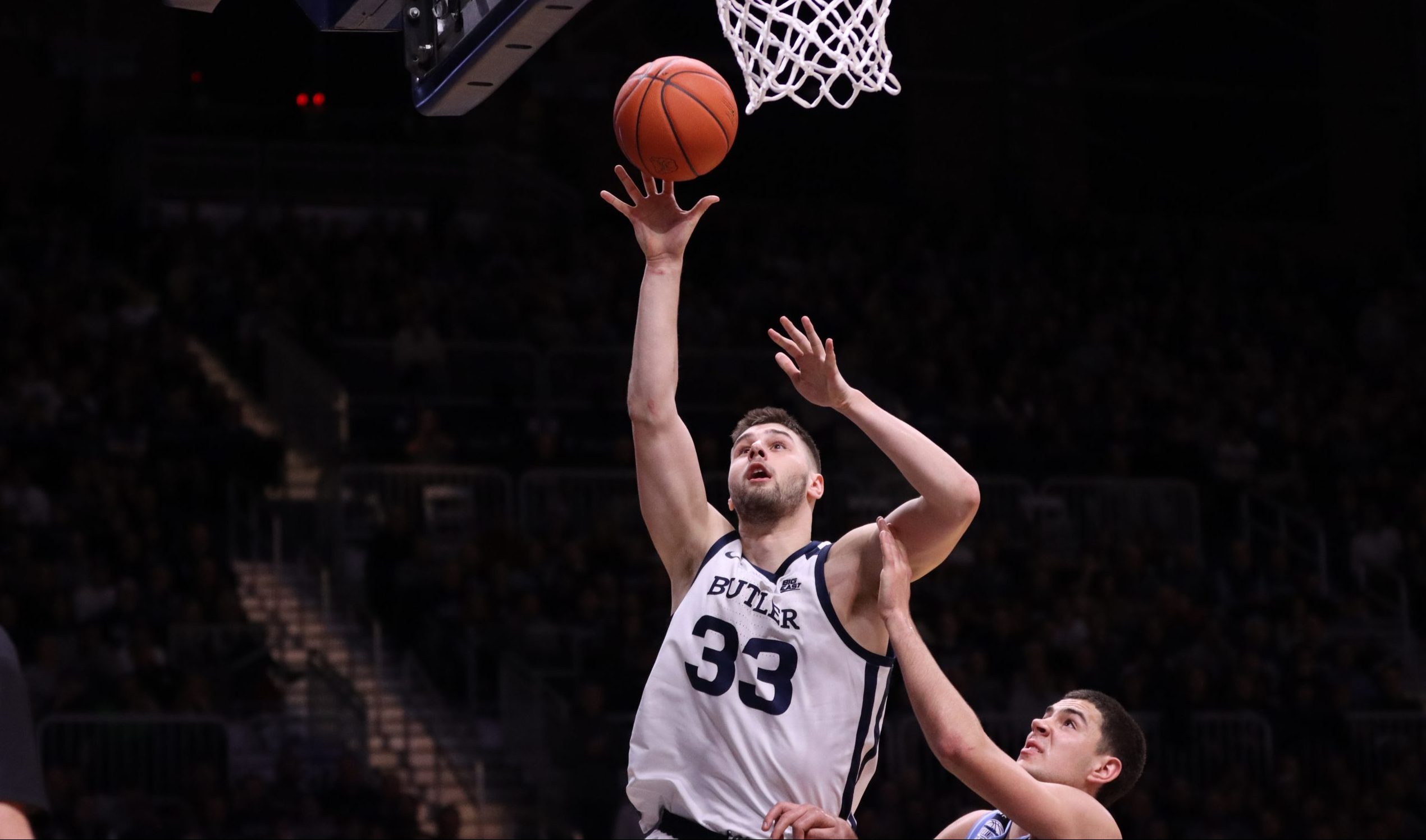 Bryce Golden makes a layup during Butler’s 79-76 win over Villanova on Feb. 5. Golden scored a career-high 18 points in the game. Photo by Chandler Hart.

After over 39 minutes of fierce, high-level basketball – and a 19-minute rain delay –  the No. 10 and No. 19 teams in the country found themselves tied at 76 with just 25 seconds remaining.

Butler had the ball. Kamar Baldwin had the shot.

With time expiring, the senior faked a drive, stepped back and knocked down a three to give Butler a 79-76 victory over Villanova at Hinkle Fieldhouse on Feb. 5.

The Bulldogs improved to 6-4 and 18-5 overall with the victory.

Here’s a look at some of the key storylines, stats, notes and quotes from the win:

There was no one other than Kamar Baldwin for the ball to be in the hands of in those final moments. Here’s that play:

With Aaron Thompson back, Butler’s offense was firing on all cylinders in the first half. In his return from a left wrist injury, Thompson only played 11 of the game’s first 20 minutes due to foul trouble, but his presence helped open up the Bulldogs’ offense in multiple ways. Sean McDermott scored 13 first-half points on a perfect 5-of-5 from the field, including 3-of-3 from beyond the arc. Six Bulldogs scored in the first half, including three with eight or more points. As a team, Butler shot 57% from the field, including 4-of-9 from deep, in the opening 20 minutes.

And that first half was interrupted by a wild weather delay. Butler vs. Villanova is typically enough excitement on its own, but on Wednesday night mother nature decided to spice things up a little bit more. Just under seven minutes into the first half, play was halted at Hinkle due to water leaking from the roof onto the court. Two members of the Butler facilities staff went onto the catwalk and moved a bucket already up there from a previous leak to the spot of the new leak. After 19 minutes of uncertainty, with the problem fixed – at least in the short term – play resumed.

Butler head coach LaVall Jordan opened up his postgame press conference by expressing his gratitude to those who worked to fix the issue: “Obviously, the guy up top holding the bucket so that we could actually play the game was an unbelievable teammate,” he said with a chuckle. “Everybody thinks Kamar Baldwin’s MVP. He doesn’t make the shot if we can’t play the game. A lot of credit to our facilities staff.”

The Bulldogs couldn’t slow the Wildcats top two scorers… Villanova’s Collin Gillepsie and Saddiq Bey, each averaging just shy of 16 points per game, combined to score 57 points in this contest on 51% shooting from the field. Bey knocked down four 3-pointers in the second half, including one with 25 seconds remaining to tie the game at 76. Aside from those two players, though, no Wildcat reached double digits

…but they kept shooting the ball at a high level in the second half. After shooting 57% in the first half, Butler bested that in the final 20 minutes, shooting 58% and knocking down half of its 3-point attempts. For the game, the Bulldogs outshot the Wildcats 58% to 47%.

Bryce Golden stepped up in a big way, scoring a career-high 18 points. The sophomore forward scored eight points on 4-of-5 from the field in the first half, but the best was still yet to come. Golden started the second half 3-of-3 from the field with six points in less than four minutes and tallied a team-leading 10 second-half points to finish with his highest total ever at the college level.

Butler snapped Villanova’s five-game winning streak against the Bulldogs which dated back to Feb. 2018. The last Bulldogs win in the series was a 101-93 win over the Wildcats at Hinkle on Dec. 30, 2017.

This was likely the most well-balanced offensive attack from Butler all season… Thompson scored nine points, and every other Bulldogs’ starter tallied at least 12. Sean McDermott scored a team-high 21. Bryce Golden finished with 18, Baldwin had 17 and Bryce Nze contributed 12.

…and Thompson’s return played a major role in that, as Jordan explained. “He’s got such great command for what’s the best thing for our team in the moment,” Jordan said. “Obviously he’s got a ton of experience and minutes under his belt since his freshman year on offense. Defensively, I think everybody sees [it], it’s obvious. So there’s a calming effect. It gets Kamar off the ball some obviously. It’s great to have him back out there. We’re wanting him to get back to 100 percent. But he battled through it and helped us a ton tonight.”

Jordan said that his team kept preserving, even as the Wildcats kept closing in the second half. “Just proud of our guys,” Jordan said. “They just stayed the course, stayed with it, kept believing in each other. Their conversations were as strong as they’ve been all year about just moving on and getting the next play right, and [that] gave ourselves an opportunity to win it down the stretch.”

Sean McDermott’s performance against Villanova was a 180 from his previous game versus the Wildcats. At The Pavilion on Jan. 21, the redshirt senior was just 1-of-11 from the field and 0-of-7 from beyond the arc, scoring just two points. At Hinkle on Feb. 5, McDermott scored those 21 points on 7-of-8 from the field, including 3-of-3 on 3-point shots.

Up next: The Bulldogs will travel north to square off against Marquette for the second time this season in a Feb. 9 matchup. The Bulldogs snapped a three-game skid with a wild 89-85 over victory over the Golden Eagles on Jan. 24. Baldwin scored 29 points in the game’s final 25 minutes in that game. Marquette has won two straight, against Xavier and DePaul, since then and was the second team out of the AP Top 25 in the most recent poll. The Golden Eagles, 6-4 in Big East play and 16-6 overall, are 25th in the NET rankings and 32nd at KenPom.